Led by an inspiring gardener, residents convert their community into a web of wildlife havens 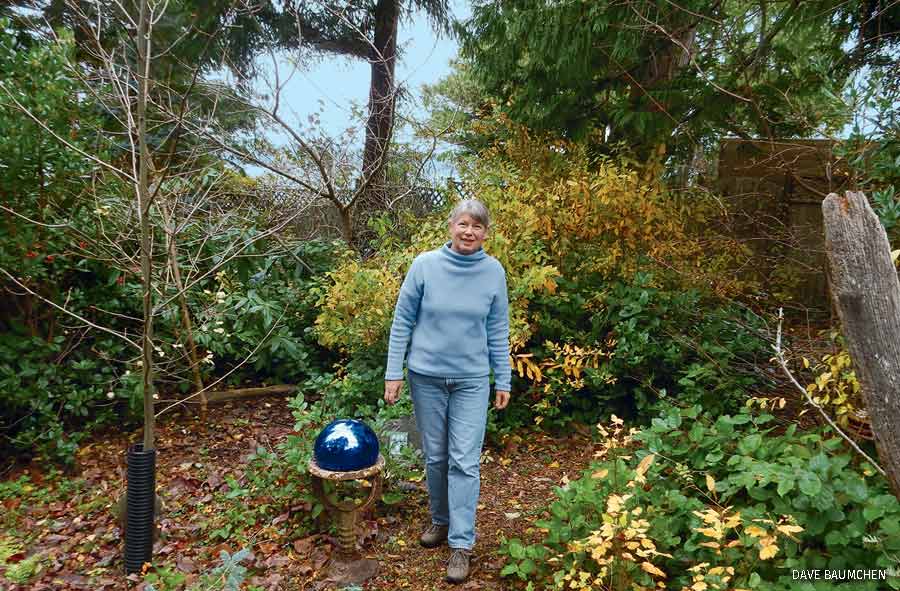 To set an example, Val Schroeder replaced her own lawn with layers of native vegetation that nurture wildlife year-round.

“Most people are drawn to Camano for its natural beauty,” says Val Schroeder, who moved here with her husband in 1994. Soon after, however, she started to see signs that logging and other development were altering the island’s bucolic character. “Rather than just sitting home and getting upset,” the high school English teacher recalls, “I decided to get out and do something.”

That something was to launch an ambitious effort to make Camano Island an early participant in the National Wildlife Federation’s Community Wildlife Habitat™ program. Started in 1997, the program provides community leaders with guidelines for turning their cities, towns or counties into networks of wildlife-friendly properties, both private and public (including parks, school grounds, businesses and places of worship). To date, the Federation has certified more than 100 communities nationwide. Teaming up with other volunteers, Schroeder began a local group to help Camano attain certification. “It seemed like a perfect fit for this area,” she says.

To set an example, Schroeder tore out her own lawn and other nonnative plants, replacing them with native ground cover, berry-producing shrubs and other vegetation that provide food and cover for wildlife. “We built a garden that serves wildlife all year,” she says. NWF rewarded her work by designating the 1-acre property a Certified Wildlife Habitat®.

By 2005, more than 500 other island landowners had followed Schroeder’s lead, and Camano became the nation’s 10th NWF certified community. “Val is a mentor and inspiration not only to her neighbors but also to other community leaders in the region,” says Federation Senior Education Manager Courtney Sullivan. Washington is now home to 15 certified communities. For her efforts, the Federation named Schroeder its Volunteer of the Year in 2005, and county conservation officials honored her with a lifetime achievement award in 2016. “Residents here have really embraced this program,” says Tom Eisenberg, president of Friends of Camano Island Parks and an avid birder who has recorded 120 avian species on his own certified property.

Today, more than 900 Camano properties have qualified for certification, creating a network of more NWF habitats per square mile than any other certified community in Washington. “This has been a positive way to get people thinking about smart growth,” Schroeder says. “It gives me hope for the future of the island.”