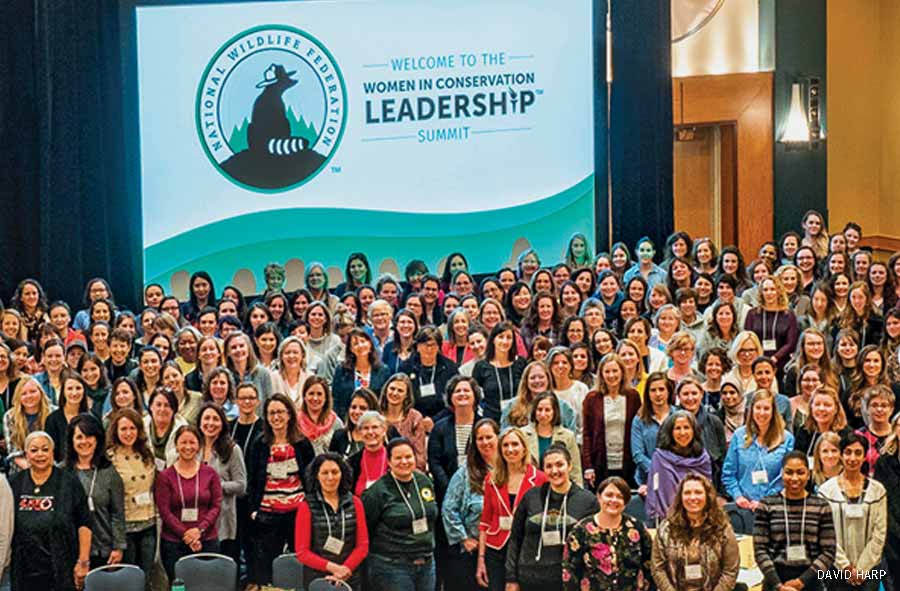 As part of its ongoing efforts to promote diversity, the National Wildlife Federation convened its second annual Women in Conservation Leadership (WCL) Summit in March near the Chesapeake Bay in Maryland. More than 330 women from 120 partner organizations and government agencies came together (above) for the three-day event to share experiences, support common goals and discuss the barriers they face in attaining leadership positions. 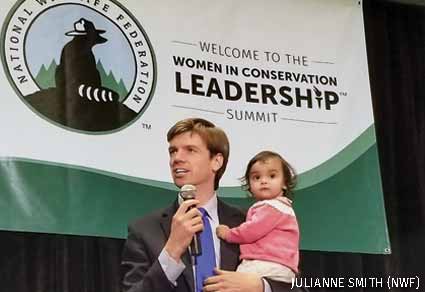 “Empowering women is a key part of strengthening the conservation movement,” NWF President and CEO Collin O’Mara told the group at the opening session, where he brought his young daughter (pictured). “The Federation is committed to investing time and resources into this critically important work.”

For its first summit in 2017, NWF invited 150 women from its staff, affiliates and board of directors. “It was such a transformative experience, we wanted to make the event open to more women in the field of conservation,” says Elizabeth Lillard, NWF’s women’s conference coordinator.

This year, attendees from across the country discussed the challenges of building strong relationships with colleagues and developing leadership skills. They also explored a range of conservation issues, such as educating their constituents on the importance of protecting pollinators and meeting the needs of minority groups.

“This year’s summit provided a unique opportunity to explore what it means to be a woman leader, how our similarities and differences can make us stronger individually and collectively and what we need to do in order to continue growing as leaders within the conservation movement,” says Claudia Malloy, NWF associate vice president for advocacy campaigns.

Empowering women from diverse backgrounds, adds Chanté Coleman, NWF director of the Choose Clean Water Coalition, “will make us more effective as we advocate for the well-being of fish and wildlife and the habitats and conditions they need.” 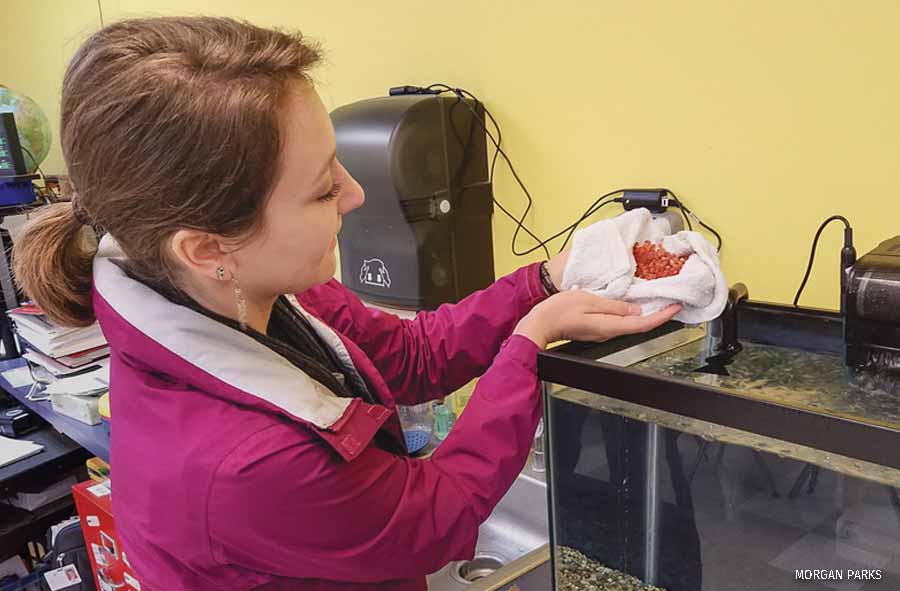 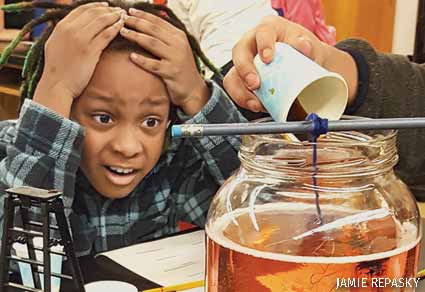 Each fall, members of Oregon’s Association of Northwest Steelheaders, an NWF affiliate, deliver thousands of Chinook salmon eggs to nearly 100 Portland-area classrooms in a program called “Fish Eggs to Fry.” Directed by the Oregon Department of Fish and Wildlife, the program helps students raise and study these native fish in aquariums as the creatures develop from hatchery-raised eggs into free-swimming fry. “Kids become citizen scientists, data analysts, empathetic caretakers and eventual wildlife advocates,” says Allison Dobscha (top), an education outreach coordinator for the affiliate and NWF. They also learn about threats such as water pollution (pictured). “Allowing students to release fry into rivers creates a connection between the kids and area watersheds,” Dobscha says. By repeating the process in winter with rainbow trout eggs, the program helps foster a love of sport angling and a passion for conservation. 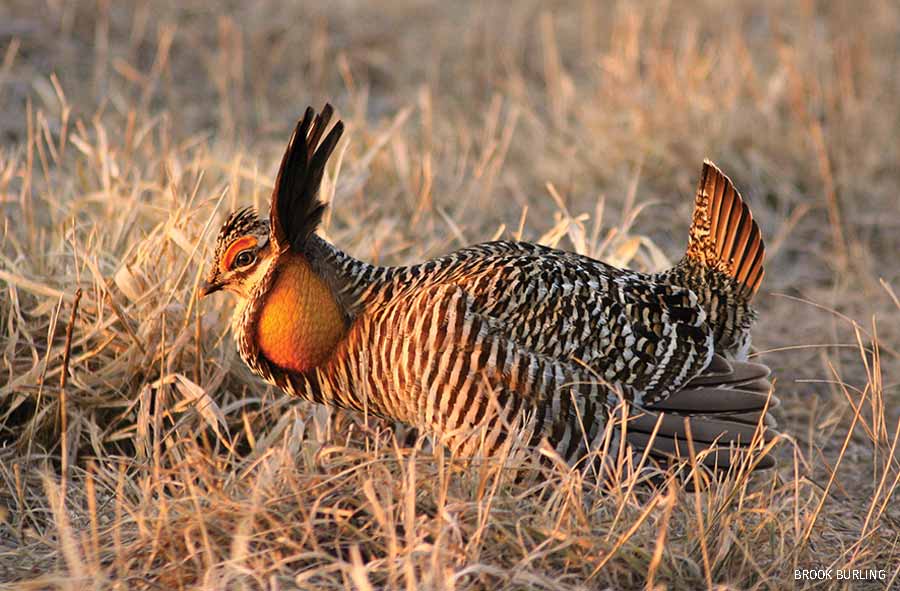 Working with the Wild Farm Alliance (WFA) and other partners, NWF recently convinced the National Organic Standards Board (NOSB)—a board of advisers to the U.S. Department of Agriculture’s National Organic Program—to recommend eliminating a policy that unintentionally resulted in the conversion of diverse ecosystems to croplands.

To qualify as organic under the program, crops must grow on lands that have been free of pesticides for at least three years. To bypass this waiting period, some growers took advantage of a loophole in the rules by bringing undisturbed grasslands, forests and other natural areas into production. In 2017, for example, about 1,000 acres of shortgrass prairie in Colorado were converted to organic crops, damaging habitat for grassland wildlife such as the greater prairie chicken (above).

During the past few years, NWF and its partners collected such evidence to persuade the NOSB to recommend closing the loophole, which “threatened to undermine the goals of the organic farming program,” says Aviva Glaser, NWF director of agriculture policy. This spring, NOSB voted to eliminate the incentive to convert wild lands to organic agriculture, “a major accomplishment,” says WFA Executive Director Jo Ann Baumgartner. 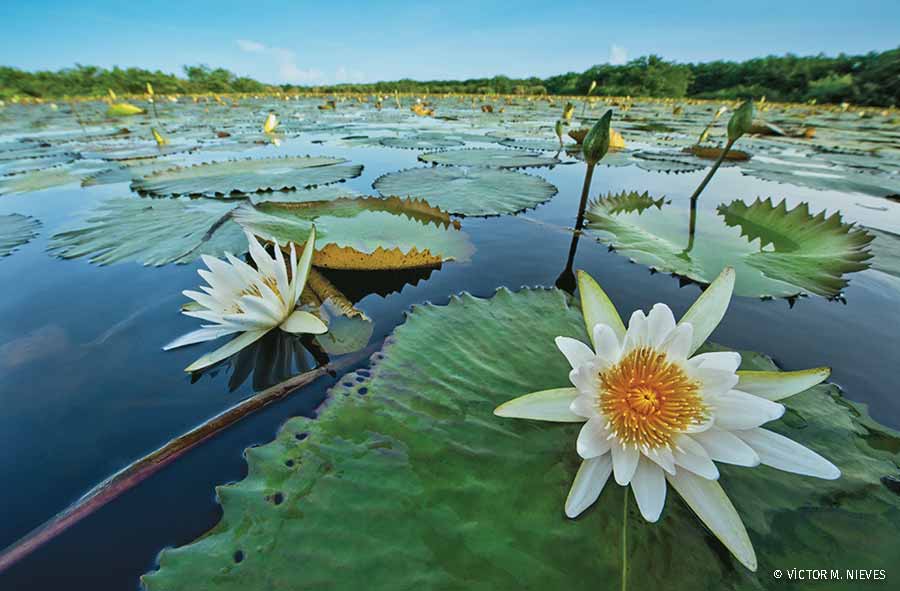 Not long after Hurricane Maria devastated Puerto Rico last September, a group of researchers from the Sociedad Ornitológica Puertorriqueña Inc. (SOPI) began conducting surveys of some of the island’s important avian habitats. “The storm destroyed millions of trees,” says SOPI President Nathaniel González. “We were investigating how it affected populations of our 17 endemic bird species and migratory visitors.”

Collecting scientific data has been key to SOPI’s mission since it began in 1995. Today, this NWF affiliate is Puerto Rico’s foremost birding group. “Without all the work SOPI has done, we’d have a lot less information about birdlife and critical habitat in Puerto Rico,” says Ron Warnken, NWF’s Southeast director of conservation partnerships.

Its work goes beyond birds. In court, SOPI recently helped block construction of a solid waste incinerator that would have increased air pollution and drained more than 2 million gallons of water a day from Caño Tiburones, the island’s largest wetland (above), and home to more than 200 local and migratory bird species and 40 fish species.

Shifting its focus a bit after the hurricane, SOPI brought food and supplies to hard-hit areas and created bird festivals and nature walks to give children a diversion from the devastation. “We had to help the people of Puerto Rico any way we could,” says González.