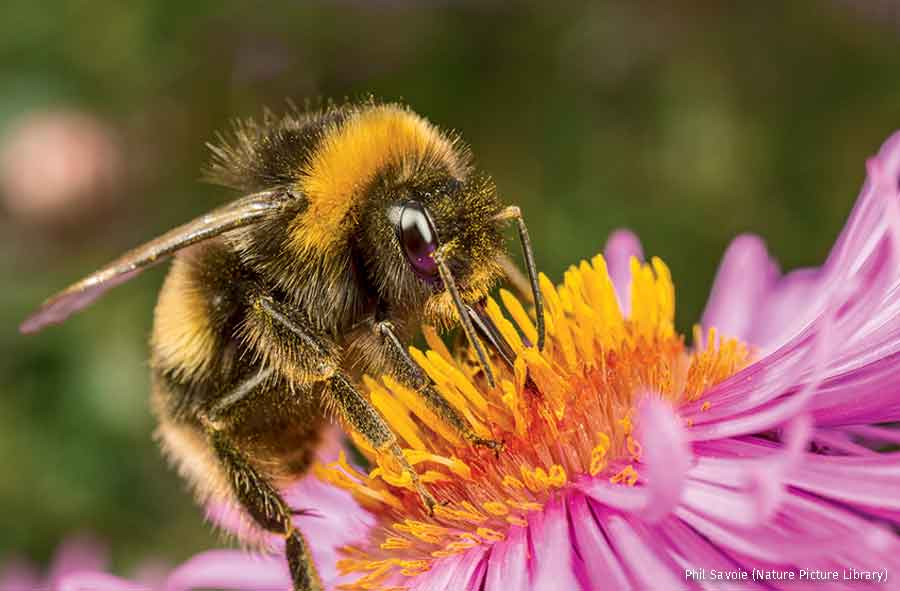 Dusted with pollen, a buff-tailed bumble bee feeds on aster in Wales. Queens of this species exposed to a common neonicotinoid are 25 percent less likely to start new colonies.

ON A SUNNY JUNE DAY in 2013, the bodies of dead bumble bees suddenly began to rain down on a shopping center parking lot in Wilsonville, Oregon. That morning, pest control operators had sprayed 55 blooming linden trees with dinotefuran, one of seven insecticides known collectively as neonicotinoids, or neonics for short. By the end of the week, some 50,000 bumble bees had died—one of the largest native bee kills ever recorded.

The effects of neonics on bees are typically less dramatic, yet can be equally deadly. “Neonicotinoids may not kill a bee outright,” says National Wildlife Federation Staff Scientist Michael Murray, “but they may cause the insect to have trouble foraging or finding its way back to the hive”—which ultimately may result in its death.

Ironically, neonicotinoids were first marketed in the mid-1990s as safer alternatives to organophosphates and other pesticides widely used at the time. While neonics are indeed less toxic to birds and mammals than most of their predecessors, they can be more dangerous to bees and other pollinators. Unlike the majority of those older pesticides, “neonicotinoids are systemic, which means they can permeate every part of the plant, including its pollen and nectar,” explains Michigan State University entomologist David Smitley, who adds that the compounds may remain in a plant many weeks after treatment.

Neonics also linger in the environment. “Bees and other wildlife can be exposed to harmful levels of these chemicals months to years after an application,” says Aimée Code, pesticide program director for the Xerces Society for Invertebrate Conservation.

Pollinators are exposed to neonics not just on landscaping plants. Many commercial fruit and vegetable growers treat their crops with the insecticides, and neonic-coated corn, soybean and canola seeds are sown on more than 100 million acres a year across the United States and Canada. Today they are the most widely used class of insecticide in the world. 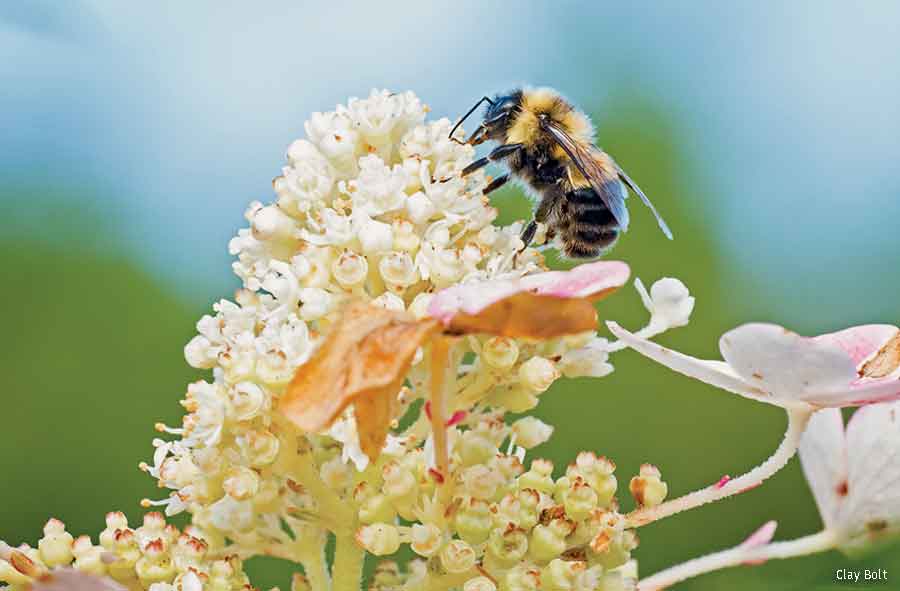 Conservationists worry particularly about the impact of insecticides on pollinators such as the rusty patched bumble bee, a once-common species that has vanished from nearly 90 percent of its range.

Studies linking neonicotinoids to problems for pollinators have proliferated in recent years. In 2016 and 2017 alone, scientists published at least five peer-reviewed papers reporting that honey bees exposed to neonics are less able to fly, to forage and to fight off disease than unexposed bees. Studies also show that even at low doses, the pesticides lead to higher worker mortality as well as to the death of queens, which reduces the reproductive success of entire colonies.

Most honey bees live in hives managed by beekeepers, but researchers are discovering impacts on wild bee species as well. In Sweden, scientists noted a drop in the nesting success of both solitary bees and colonial bumble bees that had foraged on oilseed plants grown from neonic-coated seeds. Another European team found that exposure to one common neonic, thiamethoxam, decreased by more than 25 percent the chances that a buff-tailed bumble bee queen would start a new colony.

Nadia Tsvetkov of Ontario’s York University and colleagues found that bees do not even need to forage on agricultural plants to get harmful neonic doses. In 2017, they reported in Science that the insecticides can move from farm fields to nearby meadows and woods, where they are taken up by the willows and wild clovers bees feed on. “We found neonicotinoids in plants far from agricultural areas,” Tsvetkov says.

Alarmed by studies such as these, the European Union in 2013 temporarily banned three neonics commonly used on farms and is considering more restrictions. In the United States, the U.S. Fish and Wildlife Service has banned neonic use on national wildlife refuges, and the U.S. Environmental Protection Agency (EPA) is reviewing the safety of five neonics, with draft risk assessments scheduled to be released this year. At their 2017 annual meeting, NWF’s 51 state and territorial affiliates passed a resolution requesting that EPA suspend all neonic use until research demonstrates they pose no unacceptable harm to wildlife.

Meanwhile, there are many things that individuals, particularly gardeners, can do now to protect pollinators. “Even if a product is sold at your local hardware store, that does not mean it is safe,” Code notes. “Many garden products are just as toxic as those used in agriculture.” 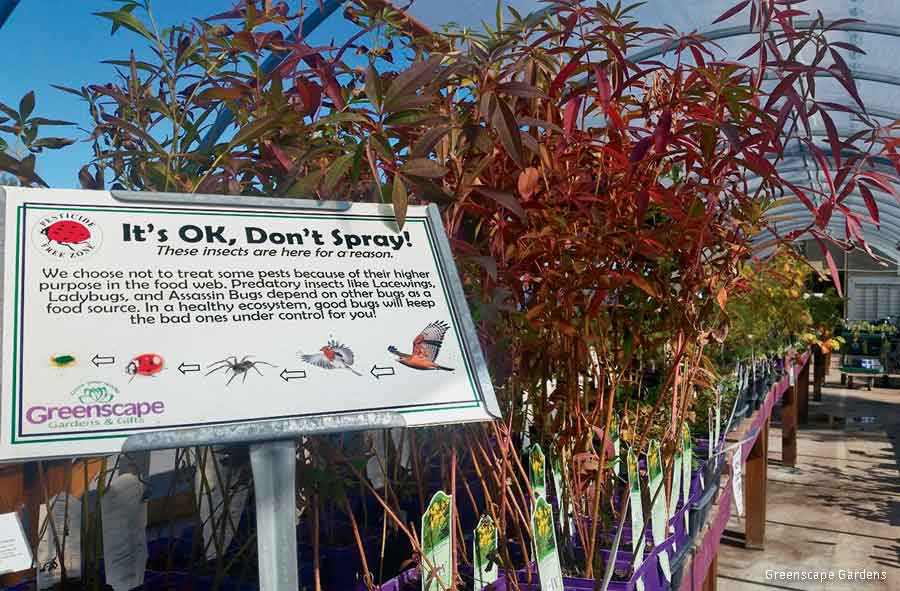 Greenscape Gardens in St. Louis, Missouri, is one of many independent garden centers that have stopped treating plants with neonicotinoids or other chemical insecticides.

To avoid neonics—found in hundreds of products, including sprays, granules, tree injections and soil drenches (pesticides applied to the base of plants)—carefully read labels. Steer clear of products that contain imidacloprid, acetamiprid, dinotefuran, clothianidin or thiamethoxam.

Where you shop also makes a difference. “Increasingly, independent garden centers and growers are moving toward eliminating systemic pesticides on plants that sustain pollinators,” says Mary Phillips, director of NWF’s Garden for Wildlife™ program. She attributes the change in part to research on pollinator health risks conducted by industry groups such as the Horticultural Research Institute as well as education efforts by members of the National Pollinator Garden Network, a collaboration of some 50 conservation and gardening groups co-founded by NWF in 2014.

Now, big-box stores have started to step up. Both Home Depot and Lowe’s have pledged to stop selling neonic-treated plants by the end of 2018 and 2019, respectively. (Currently, only about 20 percent of Home Depot’s plants have been treated, and all of them are labeled.) Last year, Walmart, Costco and True Value announced that they, too, are beginning to phase out neonicotinoid-treated plants.

Phillips encourages gardeners to work with neighborhood associations and local governments to cut back on neonicotinoid use on public lands as well. With bees and butterflies already under siege from habitat loss, climate change, disease and invasive species, she says, “any way we can reduce our reliance on neonicotinoids and other harmful pesticides is going to benefit pollinators.”

Doreen Cubie wrote about the new role of botanical gardens in the April–May 2017 issue.

Being There for Bees »
Creating a Haven for Beneficial Bugs »
Garden for Wildlife: Eliminate Chemicals »
National Wildlife Federation Blog: Pesticides and Insecticides »