Gulf Coast: Much Accomplished, Much Left to Do 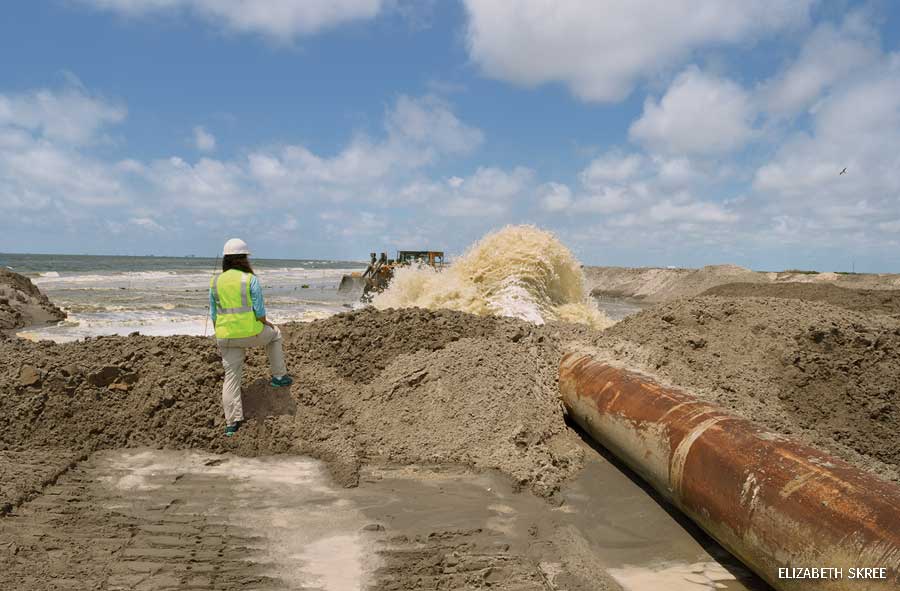 At Louisiana’s Caminada Headland, sand dredged from an offshore shoal and barged inland shoots through a massive pipe to create new beach that will benefit wildlife and protect coastal communities.

IN RESPONDING TO the 2010 Deepwater Horizon oil spill in the Gulf of Mexico, the National Wildlife Federation—with major support from the Walton Family Foundation—looked at the entire region through the lens of wildlife and people. We considered what could be accomplished with the ensuing $16.5 billion in fines to address the vast ecological damage. But we also considered recovery from ongoing stresses, including the decline in the quantity and quality of fresh water reaching the coast, which was affecting the Gulf prior to the spill.

Problems needing solutions abound across the region, but clearly the Gulf’s hugely productive coastal zone is where conflicts between man and nature play out at the highest cost to wildlife and habitat. It is also where another critical battle is underway: the shifting balance between sea water and fresh water. NWF therefore concentrates its efforts on restoring natural processes to ensure the right estuarine balance.

Estuaries are places where salt water from the ocean and fresh water from the continent mix, creating the fresh-brackish-saline gradient that contributes to both the diversity of life in our estuaries and to their productivity. Over time, the Gulf’s estuaries have experienced a growing imbalance between salty and fresh, with significant impacts on wildlife species such as oysters, wading birds and manatees.

Largely because people upstream have diverted fresh water for agriculture, industry and drinking, the Gulf’s mixing zone has moved inland. In too many estuaries, from Florida Bay in the Everglades to the Laguna Madre near the Rio Grande River, there simply isn’t enough fresh water to create any balance at all, squeezing out freshwater-dependent species.

Downstream, in the delta of the Mississippi River—by far the Gulf’s largest source of fresh water—flood levees and navigation channels on the river funnel its water directly into the deep Gulf, bypassing wetlands that could help absorb some of the excess fertilizer from farm runoff, which causes a dead zone in the Gulf.

Ultimately, healthy Gulf wildlife requires addressing the imbalance between fresh and salt water, which means addressing past mistakes and facing the newer challenge of sea-level rise driven by climate change. The best response involves harnessing nature-based solutions such as allowing the Mississippi River to build a new delta between New Orleans and the Gulf as well as restoring the flow of sand to barrier islands to provide a first line of defense from hurricanes.