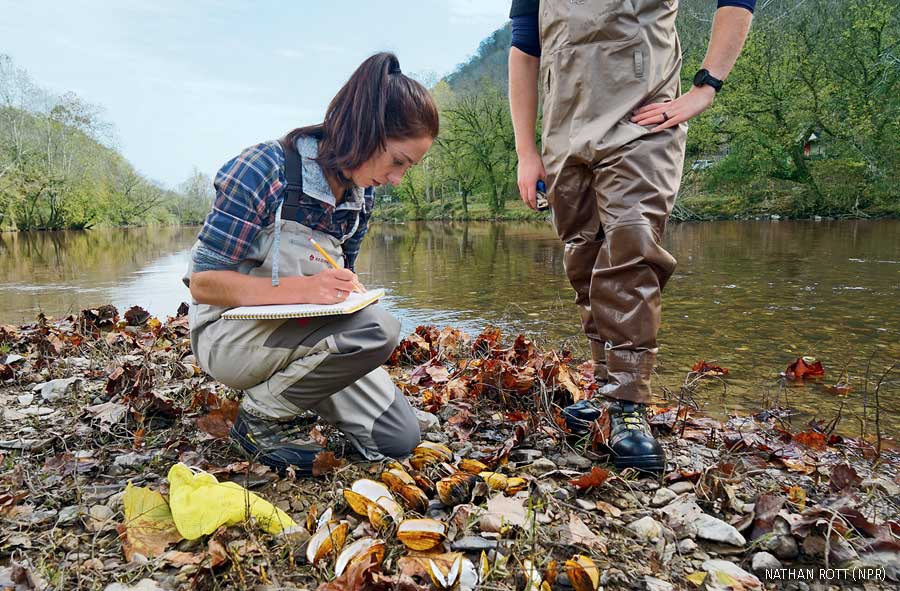 A MCDONALD'S PARKING LOT in Kentucky seems an unlikely spot for a last-ditch effort to save a critically endangered species. But that was the mission in 2016, when Virginia wildlife biologists drove to the lot with a bucket holding three female golden riffleshell mussels they had found a day earlier—after years of fruitless searching—in a tributary of the Clinch River in southwestern Virginia. The scientists handed the tawny bivalves to Kentucky malacologist Monte McGregor, whose cutting-edge work in captive breeding offered a glimmer of hope.

In 1998, only two populations of the species were known to exist in the world—both in the Clinch River system. But a chemical spill that year wiped out one of them, so the golden riffleshell seemed poised to follow nine other local freshwater mussel species into extinction. Though world famous for aquatic biodiversity, the 300-mile-long Clinch, which flows through Virginia into Tennessee, is now a poster child for the global decline of freshwater mussels, widely considered the most imperiled group of organisms on the planet.

With about 300 species, North America boasts by far the greatest diversity of Earth’s 935 freshwater mussel species. “They are part of our unique natural heritage and reflect the overall health of our freshwater systems,” says National Wildlife Federation Chief Scientist Bruce Stein. Yet about 70 percent of U.S. species are at risk, with more than 30 species already extinct. Culprits include dams, pollution, habitat loss, climate change, invasive species and, formerly, harvesting for buttons. “People think extinctions could happen,” Stein says, “but this is not hypothetical.” 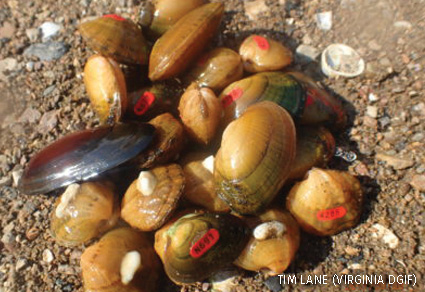 Filtering several gallons of water a day, each mussel is a powerhouse of water purification. The bivalves remove algae, sediments, bacteria and toxins and even sequester heavy metals and pharmaceuticals. By recycling and storing nutrients pulled from the water, mussels also provide food for many other animals and plants.

Even in a tank of murky water, a handful of mussels will turn it clear within hours. So healthy mussel populations are key indicators of good water quality and riverbed habitat. Yet their filtering efficiency cuts both ways. “They can filter a lot of contaminants, but they can also be more sensitive to other contaminants,” says biologist Emilie Blevins of the Xerces Society for Invertebrate Conservation. “The mussel,” she says, “is the river.”

Huge, unexplained die-offs of a single species have puzzled scientists for years, but “there’s no smoking gun yet,” says U.S. Fish and Wildlife Service biologist Jordan Richard. In 2016, he was part of a team that began discovering hundreds of thousands of dead pheasantshell mussels on the Clinch, though other species appeared unaffected. “When a species suddenly collapses and no one knows why, we tend to think disease,” says University of Wisconsin epidemiologist Tony Goldberg. He and Richard are now studying the role viruses might play in such mass die-offs. 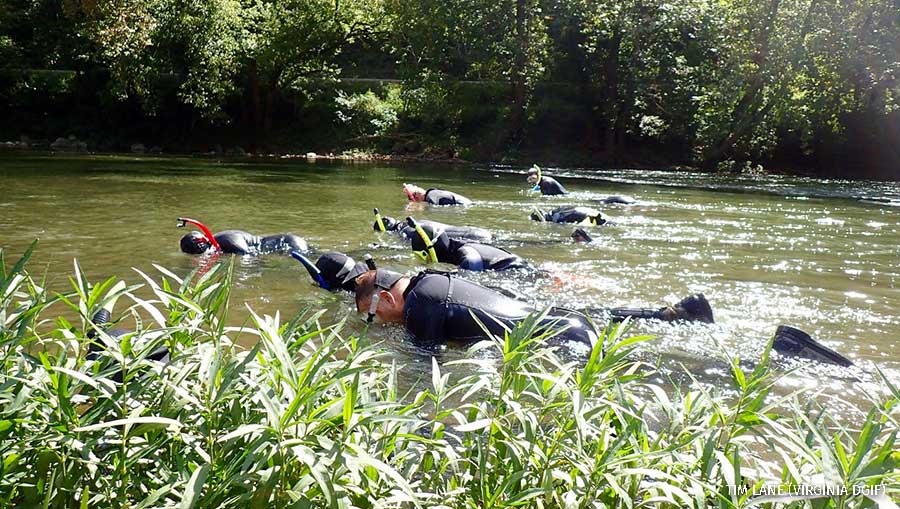 Volunteers scour the Clinch River in 2017 to log mussel species and numbers. A mix of lab-raised, at-risk species (above) bear unique tags that help researchers track the mussels’ age and growth over time.

Innovative efforts by the Virginia Department of Game and Inland Fisheries are buying time for some mussel species. At its Aquatic Wildlife Conservation Center in Marion, researchers are breeding mussels in captivity. The learning curve is steep, says Mussel Recovery Coordinator Tim Lane, but his facility is now releasing more than 10,000 young mussels of many species into the Clinch River system each year, and some are starting to reproduce.

Still, raising captive mussels is a slow and uncertain process. To reproduce, females eject their larvae (called glochidia) onto passing fish. The larvae attach to the fish, often to its gills, then eventually drop off as juvenile mussels. But each mussel species needs a certain kind of fish, and those matches aren’t always known. Researchers have tested up to 25 potential fish hosts to find a match for some rare mussel species.

For the golden riffleshell, nothing was panning out. So Virginia scientists turned to McGregor, who had developed a new in vitro method for transforming larvae into juveniles in a cocktail of fish blood serum and nutrients, bypassing the fish host altogether. This method, he says, has dramatically raised the captive-breeding success rate for mussels.

Under the Golden Arches, McGregor extracted glochidia from the three fertilized riffleshells brought from Virginia. Weeks later, his petri dishes at Kentucky’s Center for Mollusk Conservation bristled with 1,600 young mussels, which were raised to adulthood back in Lane’s Virginia facility. Finally, in September 2017, biologists released 700 tagged young mussels into three sites along the Clinch River system.

Though promising, this method offers “a band-aid,” says McGregor. “But if we can raise a few and keep them alive long enough to repair a river system, then maybe we can bring a species back from the edge of extinction.”

Leslie Allen is based in Washington, D.C.

The U.S. Biodiversity Crisis »
Catching a Ride: Species that hitchhike »
Blog: Mussels Finally Have Their Day—Will You Act On Their Behalf? »