A rescue mission to save Hawaiian tree snails from extinction Hawaiian tree snail species—fewer than half of which survive—come in a dazzling variety of different patterns and colors.

OUTSIDE THE TOWN OF KAILUA, on the Hawaiian island of O’ahu, a path cuts through the jungle from a roadside parking lot to a nondescript house trailer. Inside, a laboratory hums with the sound of eight refrigerator-sized, climate-controlled chambers. Visible behind their glass doors: more than 150 terrariums filled with fresh-cut leaves. Look closer and you’ll see some of the last tiny survivors of Hawai‘i’s spectacularly diverse native tree snails.

Long revered by native Hawaiians as sacred voices of the forest, the kāhuli (scientific subfamily Achatinellinae) have fascinated western scientists since the 1850s, when reports of their astounding diversity rivaled Charles Darwin’s descriptions of Galápagos finches. Historic collections of their colorful, elongated shells suggest they once numbered at least 99 species. Fewer than half of these survive today, most of them at risk of extinction in the next one to 10 years without major action, says wildlife biologist David Sischo.

Coordinator of Hawai‘i’s 10-year-old Snail Extinction Prevention Program of the state’s Department of Land and Natural Resources, Sischo oversees this humble house-trailer “ark.” The facility’s captive-breeding collection includes more than 40 of the rarest of the rare Hawaiian snail species, many of which have no surviving populations in the wild.

Caring for them in such confined quarters is anxious business. “I have nightmares of a fire or a pathogen or even a vandal,” Sischo says. “It’s a bad situation to have them all in one trailer. But if we didn’t bring them in, they’d be gone.” 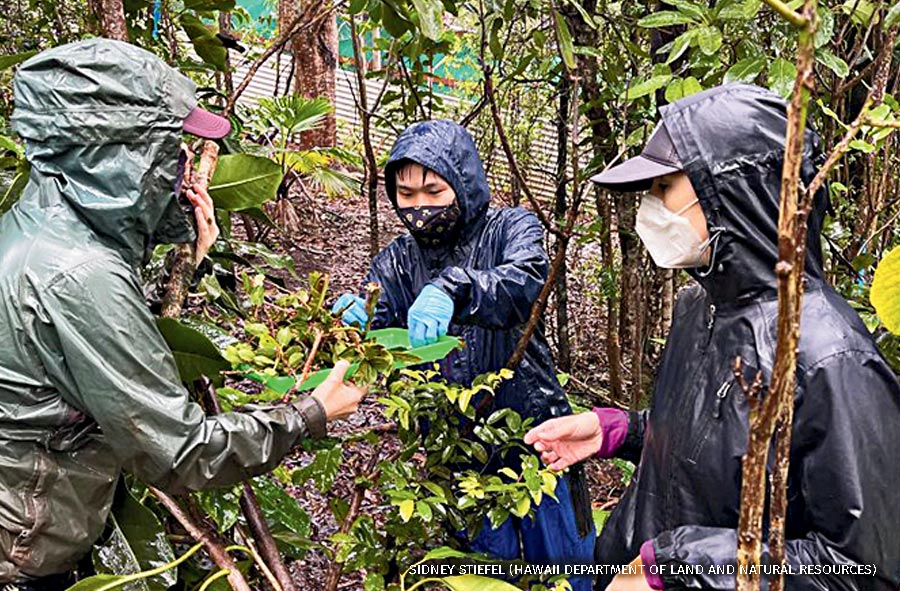 Sischo’s team collects wild snails on the brink of disappearing.

Unique among snails, Hawaiian tree snails take five or more years to reach sexual maturity, give birth to fewer than 10 live offspring annually and live well into their teens—all characteristics that make them particularly vulnerable to extinction. Their decline has had many causes, including habitat loss, climate change and invasive, introduced predators that include rats, Jackson’s chameleon and nonnative predatory snails.

The most devastating of these has been the rosy wolfsnail. Introduced in 1955 to control another invasive species, the giant African snail, the large pinkish snail from Florida turned instead to voraciously devouring the islands’ native snails.

But new hope for native snails has come recently with the Recovering America’s Wildlife Act currently before Congress. If passed, the act will provide some $59 million in funding to combat Hawai‘i’s ongoing mass extinction crisis. “It would be a game changer for pulling Hawai‘i’s endangered species back from extinction,” says Les Welsh, the National Wildlife Federation’s director of conservation partnerships for the Pacific Region.

Meanwhile, the state of Hawai‘i and the U.S. Fish and Wildlife Service together are funding a major expansion of Sischo’s breeding laboratories with additional units inside Hawai‘i’s Bishop Museum and the Honolulu Zoo. “This will allow us to bring in many of the species we knew were in immediate danger of extinction but couldn’t rescue because our small facility was maxed out,” Sischo says. The new facilities will have the added advantage of public display, allowing the beautiful snails to be their own best ambassadors for conservation.

The labs will employ captive-breeding techniques developed by Hawaiian biologists over the past 30 years. Typically, the process starts with rescue of a wild population on the brink of complete loss. In 2016, for example, Sischo’s team rushed into the mountains above Waikiki after a mudslide tore through the habitat of the last known population of Achatinella fulgens, a peach-and-cream-striped O’ahu tree snail. The team found just six individuals, knocked to the ground where they would have surely been eaten by wolfsnails. “I truly think the species was within hours of going extinct,” Sischo says.

From these six snails, the team has bred more than 50, with the goal of having more than 100 by 2023—enough for wild reintroduction inside a predator-proof tree-snail enclosure, one of 11 such enclosures built and populated with snails to date. Some of the enclosures also serve as refuges for rare native shrubs and trees. “It’s so cool to see rare snails living on rare plants,” Sischo says. Many of these plants have fewer than 50 specimens left, and the enclosures are crucial to protecting them from introduced rats, goats and pigs. Sischo estimates at least 50 more protective enclosures are needed across the Hawaiian Islands to stop the fast pace of snail extinctions. 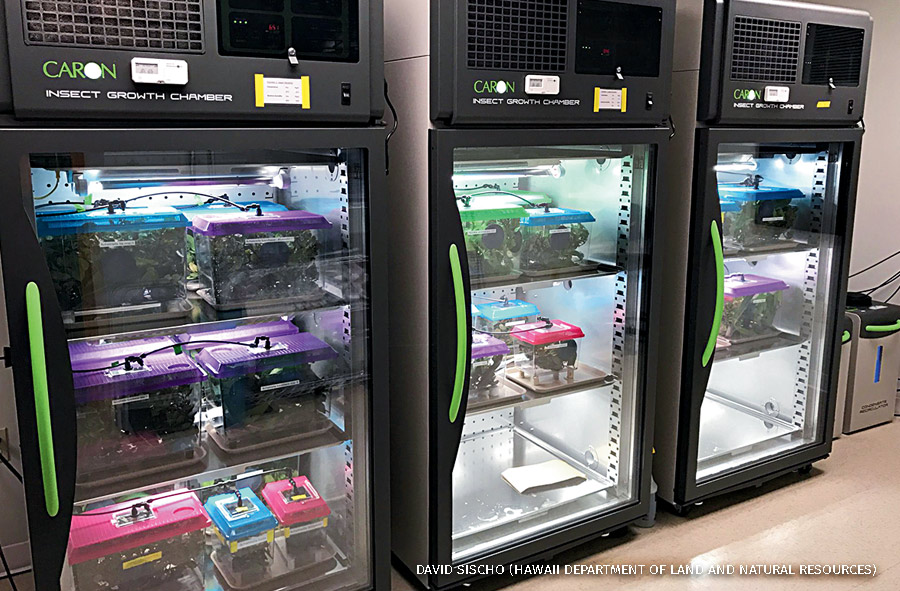 Sischo's team collects wild snails, then nurtures and breeds these survivors in terrariums until they can safely be released.

“Song of the tree shell”

Luckily, these ambitious rescue efforts have many ardent partners, chief among them Hawai‘i’s Indigenous peoples, who have cherished and celebrated tree snails for more than a thousand years. “The kāhuli, or tree snails, are a part of our oral history, handed down through the generations through songs and chants,” says Jonee Peters, a Native Hawaiian and the head of operations for the NWF affiliate Conservation Council for Hawai‘i. “One of the first hula songs we learned as children was Kāhuli aku, the song of the tree shell.”

According to the song—and Hawaiian legend—the kāhuli once filled the forests with their trilling. Peters recalls hearing stories of the melodious whistle as a child hiking with her dad. “It seemed to grow louder as we walked deeper into the dark forest,” she recalls. She grieves that younger Hawaiians may never know that sweet song.

The kāhuli’s song remains a scientific mystery, as an individual snail makes no sound. One theory is that the snails were once so plentiful in forests that they “sang” when breezes vibrated their shells.

“I dream of the day our children will be able to see or hear the tree snails they now know only from our songs,” Peters says. “It feels like it will take a miracle. But I believe that our conservation work can make this miracle happen.”