A mission of visual discovery 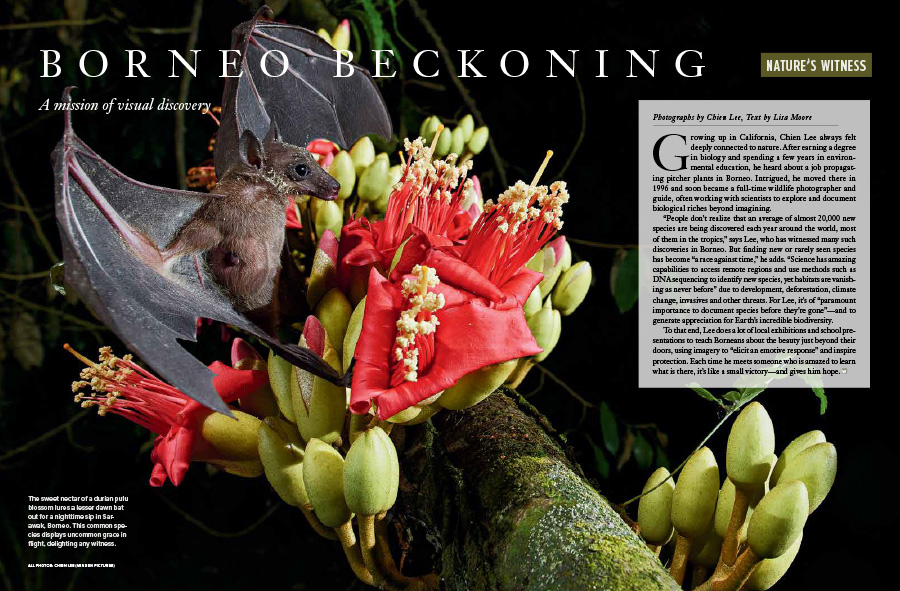 The sweet nectar of a durian pulu blossom lures a lesser dawn bat out for a nighttime sip in Sarawak, Borneo. This common species displays uncommon grace in flight, delighting any witness. (Photo by Chien Lee/Minden Pictures)

GROWING UP IN CALIFORNIA, Chien Lee always felt deeply connected to nature. After earning a degree in biology and spending a few years in environmental education, he heard about a job propagating pitcher plants in Borneo. Intrigued, he moved there in 1996 and soon became a full-time wildlife photographer and guide, often working with scientists to explore and document biological riches beyond imagining.

“People don’t realize that an average of almost 20,000 new species are being discovered each year around the world, most of them in the tropics,” says Lee, who has witnessed many such discoveries in Borneo. But finding new or rarely seen species has become “a race against time,” he adds. “Science has amazing capabilities to access remote regions and use methods such as DNA sequencing to identify new species, yet habitats are vanishing as never before” due to development, deforestation, climate change, invasives and other threats. For Lee, it’s of “paramount importance to document species before they’re gone”—and to generate appreciation for Earth’s incredible biodiversity.

To that end, Lee does a lot of local exhibitions and school presentations to teach Borneans about the beauty just beyond their doors, using imagery to “elicit an emotive response” and inspire protection. Each time he meets someone who is amazed to learn what is there, it’s like a small victory—and gives him hope. 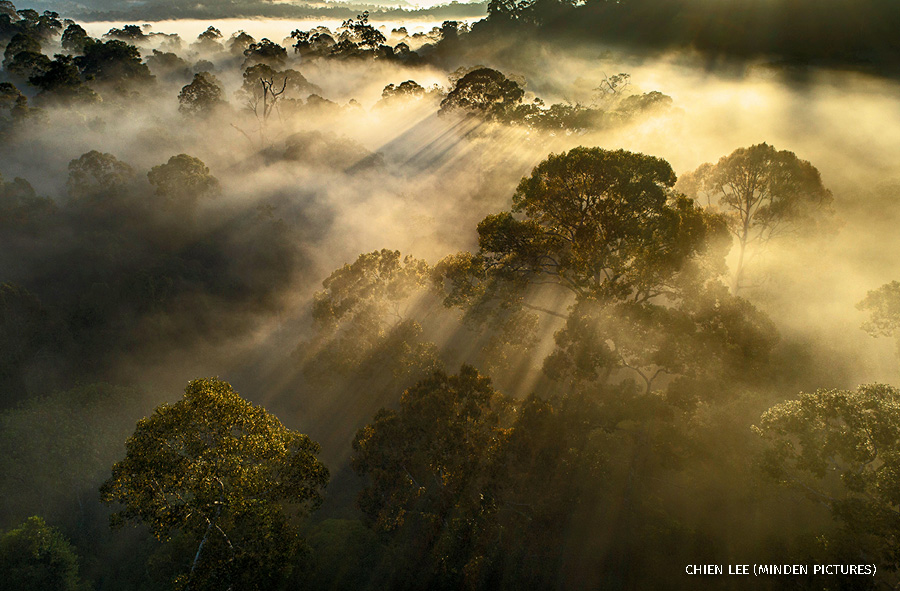 Sunrise gives rising mist an otherworldly glow over the ancient rainforest of the Danum Valley Conservation Area (above) in Malaysian Borneo, one of Lee’s favorite areas to explore. Such protected habitats nurture endemic species that often dwell in small niches almost impossible to find. 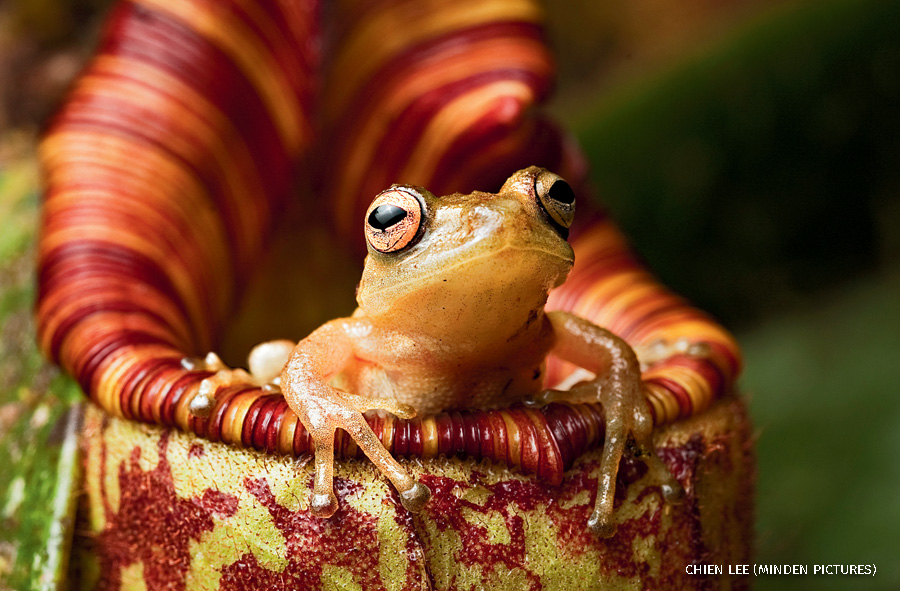 Discovered in 2009 but only named in 2021, this Bornean bush frog (Philautus nepenthophilus, above) appears to live and lay its eggs in a single species of pitcher plant in the montane forest of Mount Murud in Sarawak, Malaysia. Some 42 species of pitcher plants thrive on Borneo and nearly all are carnivorous, with a few having evolved mutualistic relationships with vertebrates. If any animal depends mainly on one plant for its survival, it remains profoundly vulnerable to habitat disruptions. 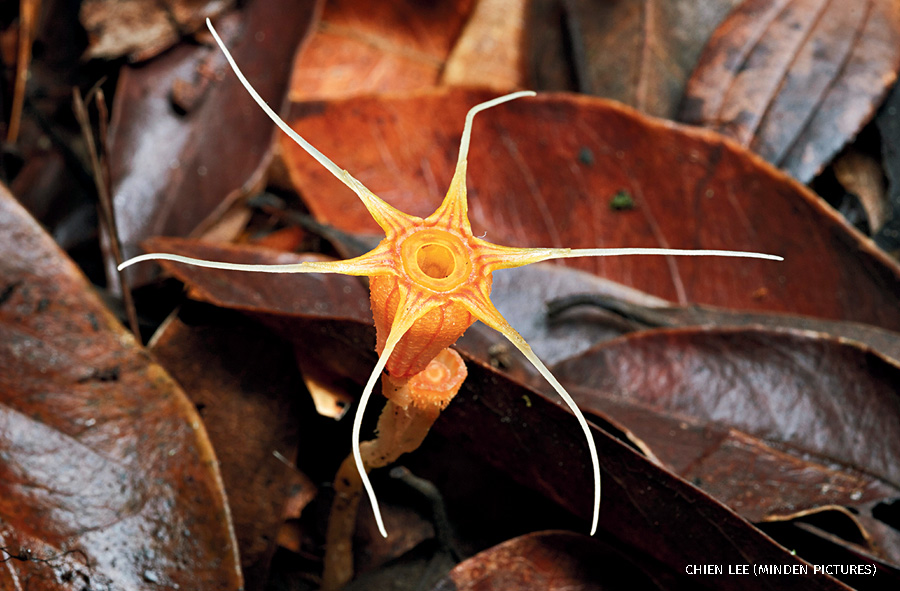 The same is true for delicate plants such as this fairy lantern (Thismia ornata, above), which Lee found in a pocket of decaying leaf litter in Sarawak. Described as a distinct new species in 2020, this tiny mycoheterotrophic plant draws its energy not from photosynthesis but from a symbiotic relationship with fungi.

In Borneo, says Lee, “biologists always feel on the forefront of discovery.” Just 30 minutes from his home in the city of Kuching, he can photograph a new species “no one has ever seen before. There’s so much left to discover.” 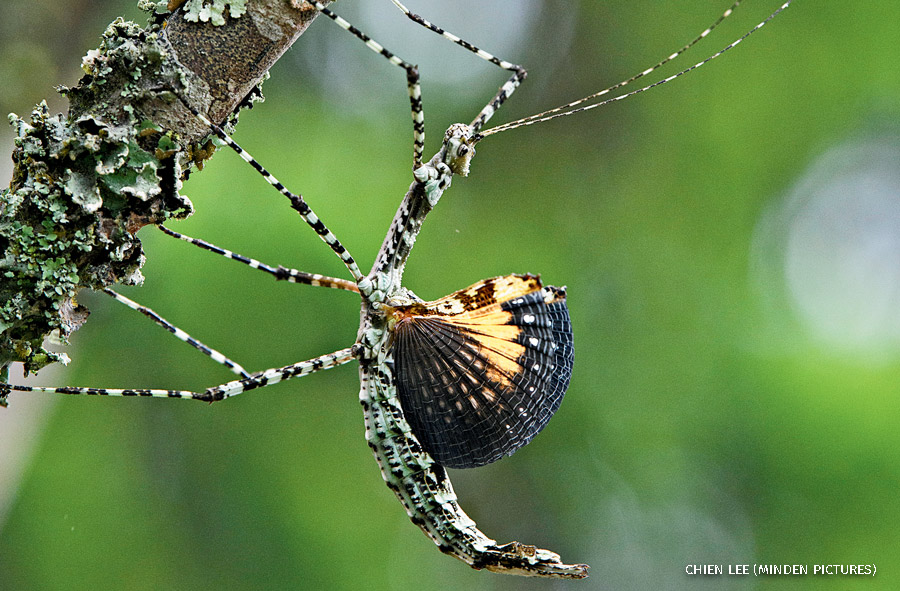 Lee doesn’t have to go far afield to find new species in Borneo’s biodiverse wonderland. A few years ago, while walking through a parking lot, he found and photographed a stick insect on a lichen-covered tree. In 2019, an entomologist determined it was a new species and did Lee the honor of naming it after him—Pseudodiacantha chieni. These creatures are unusual in that they raise brightly colored hind wings as a startle defense (above) if they are disturbed. 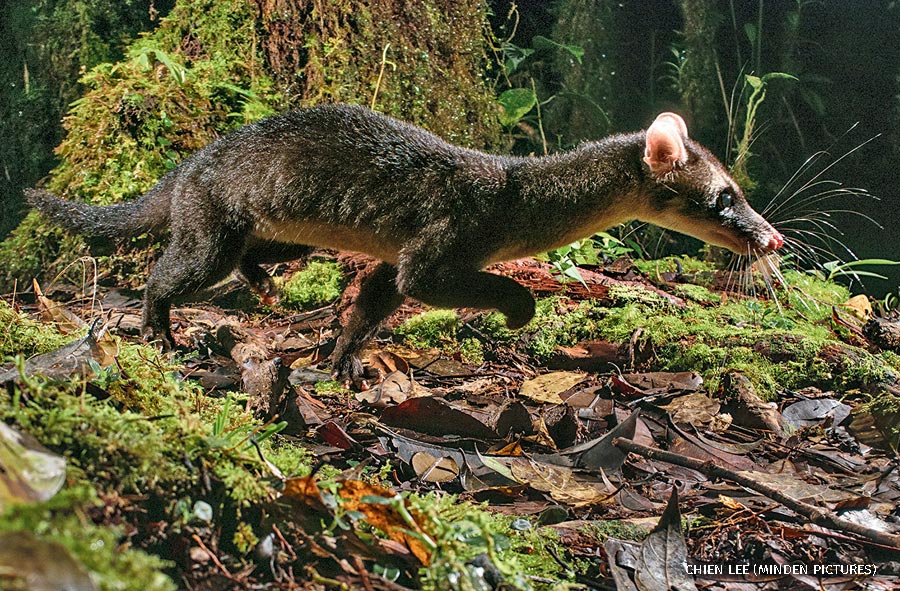 Though not new to science, the Hose’s civet (Diplogale hosei, above) is extremely elusive, making it one of the world’s least-known carnivores. Endemic to Borneo, it is threatened by habitat degradation. Until recent work with camera traps, very few photographs of the animal existed. Lee believes this is the first DSLR photograph of this species made in the wild. 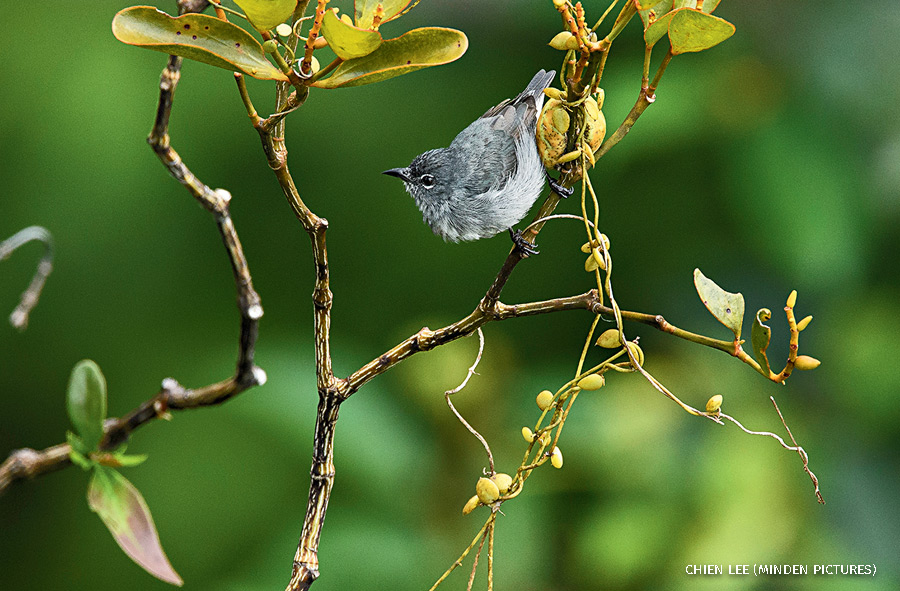 In 2009, the first blurry images of an unusual little bird began to appear. Named the spectacled flowerpecker (Dicaeum dayakorum), it was the first new endemic bird species discovered in Borneo in more than 100 years. During the past decade, very few observations of the elusive bird have been made in the wild, so Lee was thrilled to finally spot it and create a clear portrait (above). Because this bird feeds only on mistletoe berries in the canopy of mature trees, it appears highly dependent on old-growth rainforest for its survival. 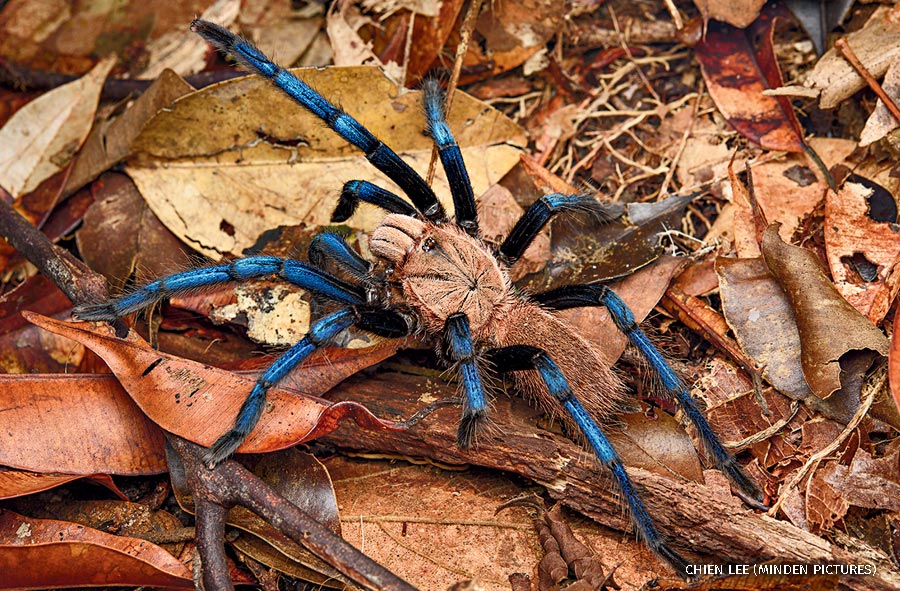 In yet another moment of discovery a few years ago, Lee photographed a blue-legged tarantula (above), which an expert determined was an entirely new genus and species (since named Birupes simoroxigorum). Unfortunately, the announcement lured spider collectors who gathered scores of specimens. Such “biopiracy” is one more threat that humans have caused—but can solve by embracing their role as stewards of nature’s gifts.

Lifelines of the Planet »
A Downward Spiral »
It's My Nature »