Inspired by a determined biologist, women in India’s Assam state are using their art—and their love of community—to save the endangered greater adjutant stork. 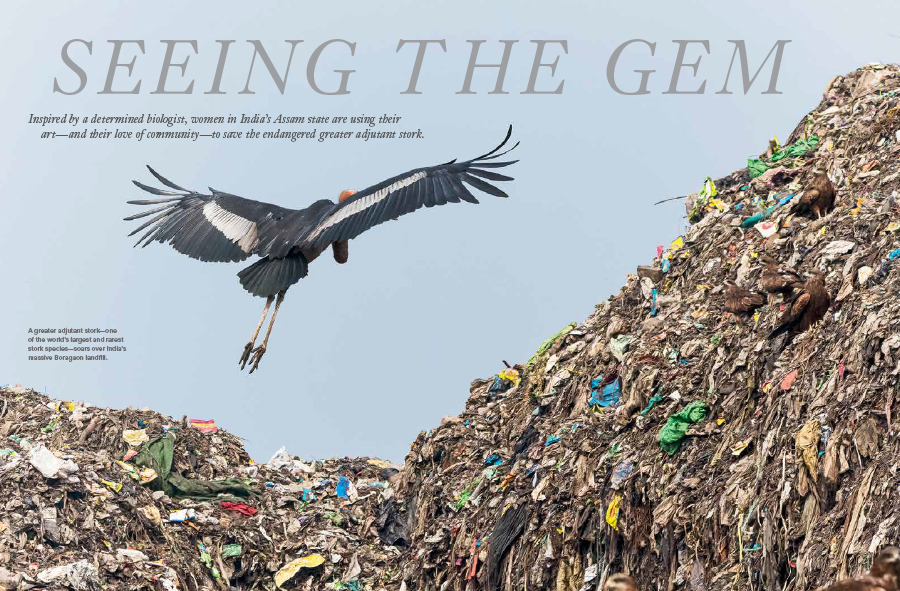 THE BORAGAON LANDFILL IN GUWAHATI, INDIA, assaults the senses. Garbage rises in inconceivably mountainous heaps, where low-paid workers scavenge for bits of recyclable materials amongst the refuse, toiling long hours without protection from the untreated waste and vile fumes. Cattle wander through the scene. Feral dogs leap from heap to heap, and clouds of black kites soar overhead, seeking morsels below.

Adding to the heartbreak, this sprawling 59-acre dump spills into the Deepor Beel wetland, listed by the Ramsar Convention as a wetland of international importance. This biodiverse ecosystem, which sustains more than 200 species of birds, has shrunk in size by about 35 percent since 1991 due to development and multiple other threats.

Yet there’s beauty in Boragaon. It has become an unlikely gathering place for endangered greater adjutant storks, regal birds that reign over the chaos (below). They stole my heart after my first visit in 2018, and in area villages they have won the hearts of the people, who have empowered themselves to save the storks—a labor of love that is bonding communities. 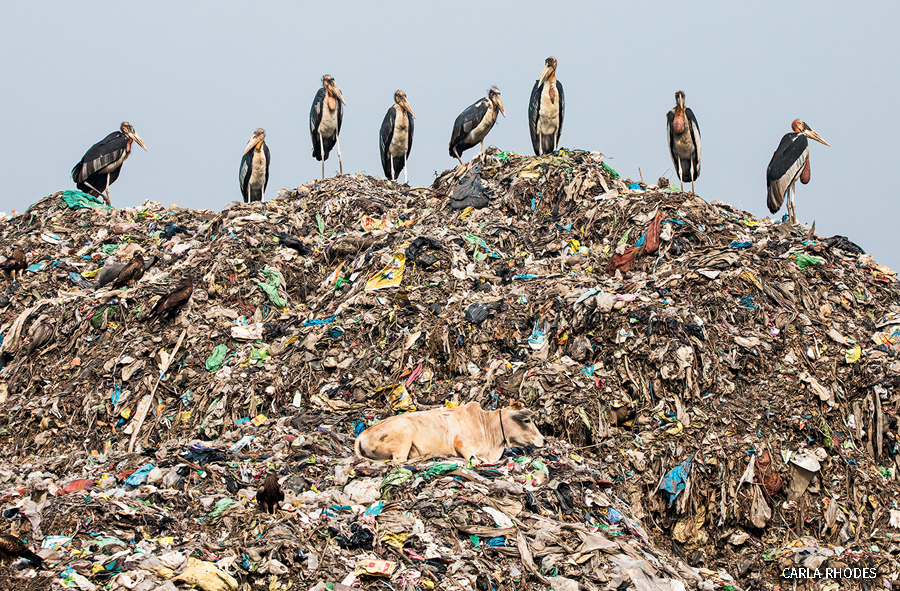 HOPE AMIDST THE RUINS 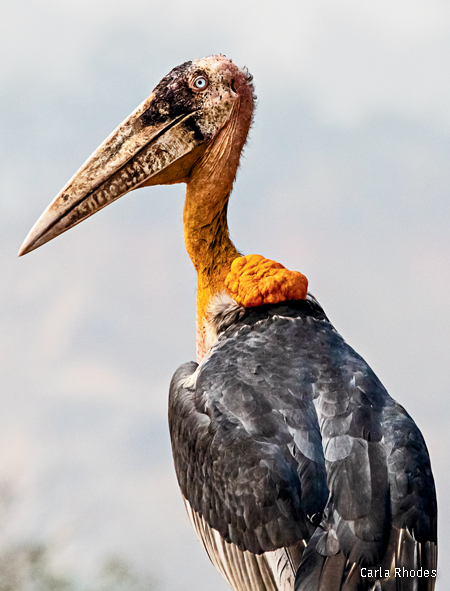 Evoking prehistoric creatures, greater adjutant storks stand up to 5 feet tall with wingspans of about 8 feet. With a stiff military gait, these rare birds have large wedge-shaped beaks that they clatter to communicate, sky-blue eyes, an inflatable pouch hanging from a naked electric-yellow neck and bald heads topped by spindly black feathers (above). 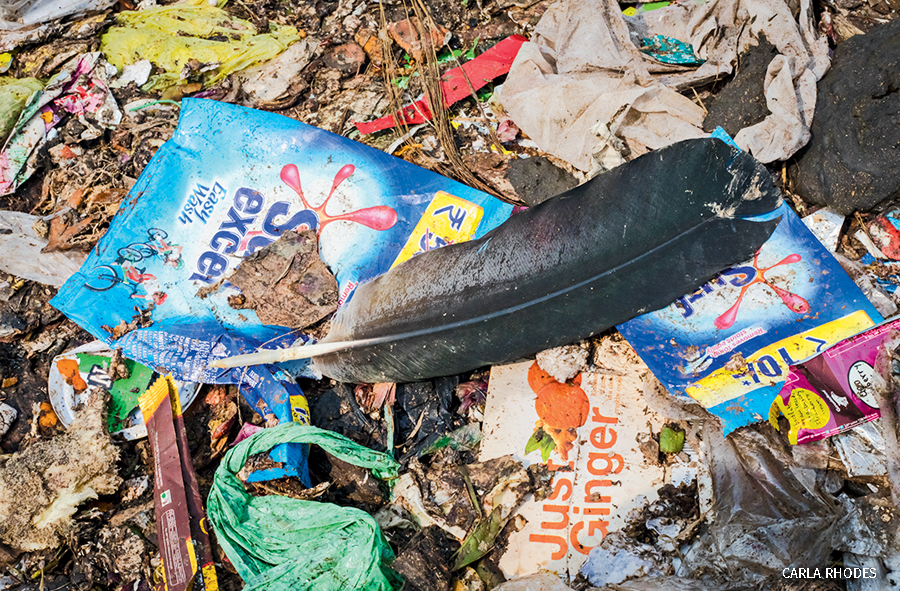 Fewer than 1,200 individuals remain, with roughly 80 percent of those living in Assam’s Brahmaputra Valley, home of the Boragaon. A stork feather amongst the waste (above) hints at how greater adjutants have adapted to human encroachment, from traditionally foraging in wetlands to scavenging tainted fare from the unsorted garbage. The storks also nest in three area villages—Dadara, Pachariya and Singimari—where a group of inspiring women is working to save these rare scavengers, led by a remarkable biologist. 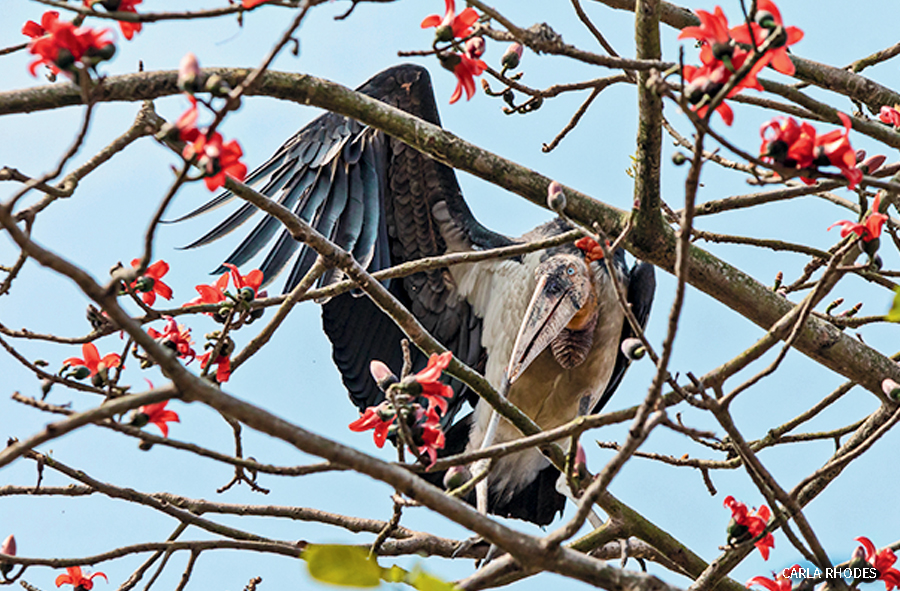 Wildlife biologist Purnima Devi Barman often says, “A dream is not a dream until you lose sleep.” She has lost plenty since 2007, when she vowed to conserve greater adjutant storks “until my last breath.” It hasn’t been easy. Known locally as hargila (Sanskrit for bone swallower), these storks had been stereotyped as messy, smelly pests that many considered a bad omen. Because they often form nesting colonies in trees on private property (above), they lack government protection, leaving them vulnerable. 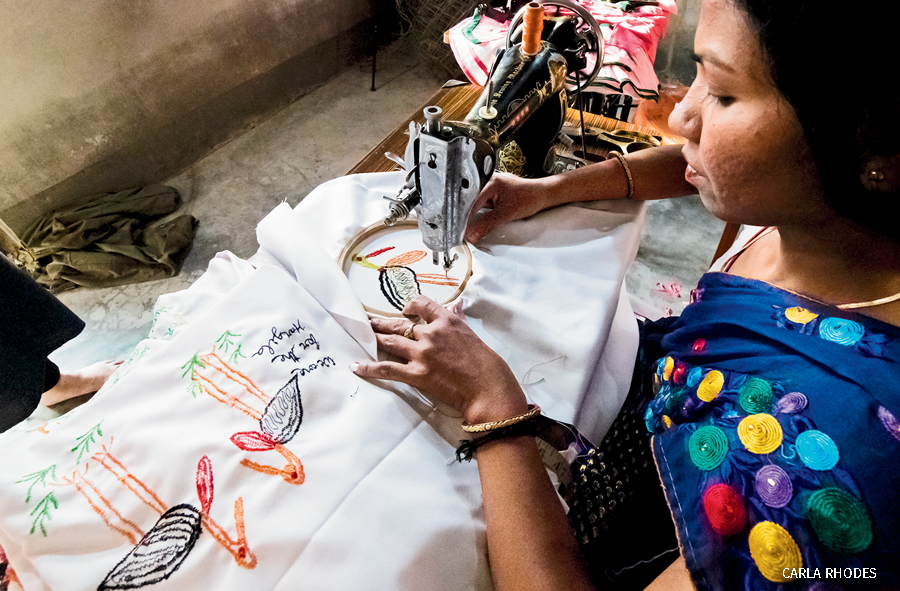 To save the birds, Barman hoped to bring them “into the hearts, minds and cultures of the people.” So she mobilized a group of women called the Hargila Army, which has grown to 400 active members with thousands pledged. They work to educate communities on the importance of these rare scavengers, urging people to protect nesting trees and weaving greater adjutants into the local culture—metaphorically and literally.

With donated handlooms and sewing machines, members of the Hargila Army weave and stitch greater adjutant storks into clothes, tote bags and traditional textiles of the Assam state. In this way, they not only raise awareness about the storks but earn income through textile sales locally and globally online, linking their conservation efforts to their livelihoods. “It seems like our life has completely changed after integrating hargila motifs into our clothes,’’ says Hargila Army member Jonali Rajbongshi, who sews stork designs on tote bags (above). “Now I am empowered.” 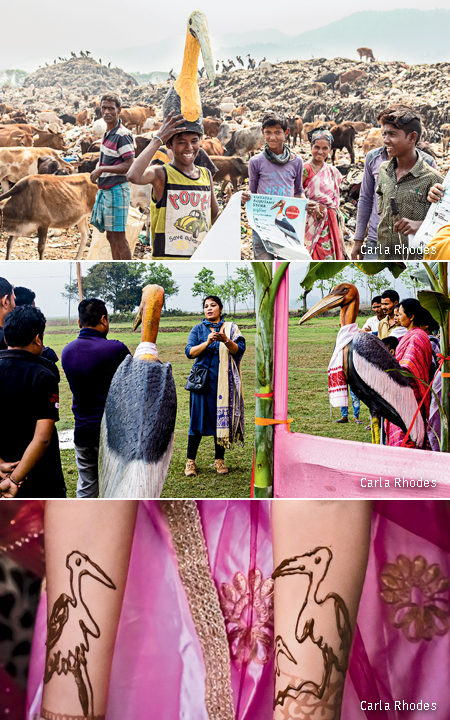 Known locally as “Hargila Baideo” (stork sister), Barman gives presentations at schools and local events such as cricket matches (middle) and for people who live and work at the Boragaon landfill (top).

Spreading the word extends to local weddings, where members of the Hargila Army adorn guests’ arms with hargila henna designs (bottom). Thanks to such innovative efforts, the overwhelming majority of villagers in Dadara, Pacharia and Singimari now see it as an honor to have nesting greater adjutants in their backyards, and few—if any—nesting trees have been cut down since 2010. The local population of greater adjutants has risen from 400 in 2007 to 950 birds in 2021, and nests rose from 28 in the 2007–2008 breeding season to 220 in 2021, making the area the largest breeding colony of hargilas in the world. Barman’s inspiring model shows that when communities learn about local wildlife, both conservation and people can make gains. Simply put, if you care for your own backyard, it can take care of you.

Carla Rhodes is a wildlife conservation photographer and writer based in New York.