A Star is Born

Sharing his love of nature, “Ranger Freddy” has become a social media sensation 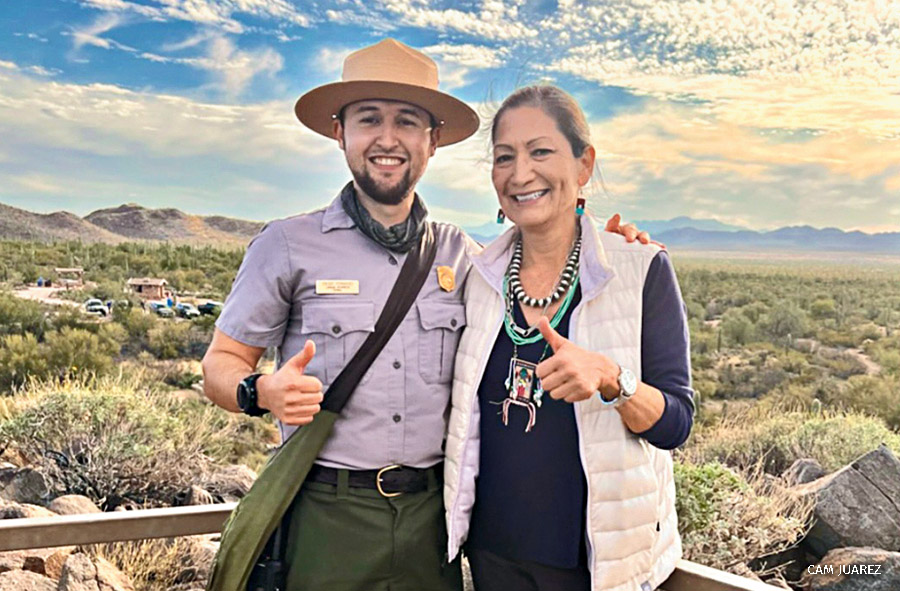 Whether visiting with Interior Secretary Deb Haaland (above) or hamming it up with a hug for a beloved saguaro cactus (below), Ranger Freddy’s exuberance always shines.

FREDDY GUTIERREZ FERNANDEZ-RAMIREZ has always loved the desert—and now tens of thousands of people all over the country are learning to love it with him.

As a kid, Freddy spent summers with his maternal grandparents in Rayón, Sonora, Mexico, where his family has roots centuries old. There he explored the Sonoran Desert, discovering its plants and wildlife. Freddy credits his love of nature to his grandparents, who he calls “my first teachers.”

Though he studied criminal justice in college, his love for the desert led him to volunteer at Arizona’s Saguaro National Park, where he soon landed an internship. In 2017, he officially became a park ranger, using hikes and slide presentations to educate guests on the park’s wonders. 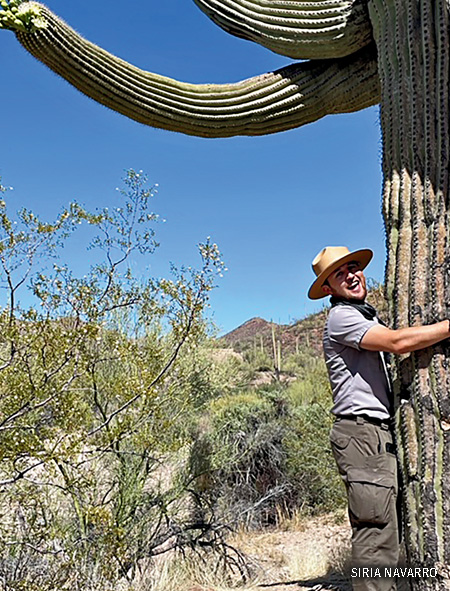 When COVID-19 closed the park in early 2020, Freddy and his fellow ranger Jordan Camp tapped their creativity and created “Freddy Fridays,” a series of videos Camp posts every Friday on the park’s Instagram site to help faraway nature lovers stay connected. As they say in the social media world, Freddy went “viral.” The site now has more than 185,000 followers—not the many millions of a movie star, but not bad for a national park.

What’s the appeal? Freddy has a gift for being delightfully goofy and unapologetically enthusiastic about the park, sharing safety tips and fun facts about its plants and wildlife.

His spirit shines in every video they post. In one from November of 2021, he pretends to transform himself into a lizard, which—wearing a tiny ranger hat—goes on a walk through the park and comes across a coachwhip snake devouring a lizard. After relaying cool facts about the snake—“one of the fastest and longest in the region”—Freddy quips, “Well, I better get going before I become a meal.”

His lessons can also be practical and packed with natural history. In one post, he shows visitors how to remove spiky “jumping cholla” cactus spines from their skin by using a hair comb. He explains how the Gila woodpecker and gilded flicker are the two bird species that drill nesting holes in saguaro cactus. And he shares his excitement over finally seeing a night-blooming cereus, called La Reina de la Noche or Queen of the Night, which he describes as “absolutely magical.”

In another post, fellow ranger Raeshaun Ramon, a member of the Tohono O’odham Nation, shows how to harvest saguaro fruits. Ramon’s use of his Indigenous language and Freddy’s use of Spanish help connect a diversity of people to the park.

The lessons Freddy shares evoke his grandparents. “Every time I walk in the desert, I think of them,” he says. “The Sonoran Desert is my ecosystem, it’s my home, and my love of the desert is my greatest inheritance.”

Julia Jeanty is the policy manager at Data for Progress.