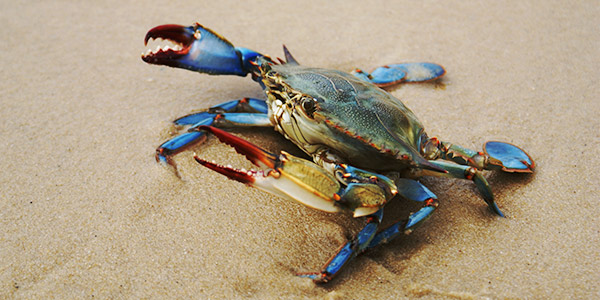 Also known as the Chesapeake blue crab or the Atlantic blue crab, these crabs are strong swimmers—largely due to their fifth pair of legs, which are shaped like paddles. They are striking to spot with their often bright-blue claws and olive-colored carapace (shell). The claws on the adult female blue crab are tipped with red. Males can be seven to eight inches (18 to 20 centimeters) across, while females are a bit smaller in size.

The blue crab is widely distributed along the Atlantic and Gulf coasts, from Nova Scotia through the Gulf of Mexico and as far south as Uruguay. It also has been introduced in other parts of the world. This crab inhabits estuaries and brackish coastal lagoons. Predators include the Kemp's ridley sea turtle and the whooping crane.

These crabs are predacious and scavenge for food. They have been known to eat other crustaceans (including their own species), recently dead fish, plant materials, clams, oysters, worms, insects, and mussels.

The blue crab's mating season occurs between May and October. A male will mate with a female after she has completed her final molt, and she has a soft shell. The female will lay up to two million eggs in a spongy mass that starts off an orange color, but gets closer to black as it comes time for the crabs to hatch. Blue crabs undergo several different developmental stages to reach adulthood. A blue crab's typical lifespan is between three and four years.

Blue crabs are not threatened or endangered. However, habitat loss and nutrient loading are some of the larger issues faced by this species. In addition, recent reports have shown that blue crabs are projected to be detrimentally impacted by climate change in a way that can also wreak havoc on sensitive ecosystems that the blue crab calls home.

Carbon pollution from burning coal, oil, and gas is causing climate change that is threatening fish and wildlife across the globe. If we don’t make changes soon, the earth will continue to have warmer temperatures in all seasons; an increase in the frequency, duration, and intensity of hurricanes and other severe weather events; as well as an increase in the sea level of up to two feet or more.

The Chesapeake Bay is our nation's largest estuary and sustains more than 3,600 species of plants and animals. However, if global climate change continues unabated, projected rising sea levels and water and air temperatures will significantly reshape the region's coastal landscape, threatening recreational and commercial fishing including crabbing in the region. According to the National Oceanic and Atmospheric Administration’s Chesapeake Bay Office, the bay shoreline is being affected at a faster rate than the global average because land in the region is already naturally subsiding.

The temperatures in the bay have already increased by almost 2 degrees Fahrenheit since 1960 and are projected to continue to increase by an additional 3 to 10 degrees by 2100—an immense change that will have a dramatic effect on the estuary and the species it supports. Warming temperatures in the Chesapeake Bay are predicted to also greatly impact eelgrass, a seagrass that provides essential habitat for juvenile blue crabs. This impact was seen in 2005, as high Chesapeake temperatures caused a massive die-off of the seagrass.

Blue Crabs in the Gulf

Aside from their ecological importance, blue crabs are one of the most economically important fisheries of the Gulf. Louisiana alone lands approximately 26 percent of the total blue crabs for the nation, a value of more than $135 million at today’s market prices. A decline in blue crabs could have larger economic implications for recreational fishing and tourism on the Gulf Coast.

Using the money from BP’s oil spill fines to stop coastal wetlands loss and protect habitats for blue crabs will have a positive impact on the entire food web of the Gulf of Mexico—and the Gulf Coast economy as well.

Increased carbon pollution is expected to cause blue crabs to grow abnormally large shells, turning this species into larger, more aggressive predators that could significantly alter the fragile Chesapeake ecosystem. Their main prey, like oysters, are expected to suffer from weaker, slower-growing shells due to acidic water conditions caused by the ocean absorbing more carbon dioxide. The larger, hungrier blue crabs will have the ability to eat many more oysters, potentially throwing the whole food chain out of whack. This shift in the predator-prey balance would harm efforts to rebuild the stocks of both species.

Although climate change is expected to lead to abnormally large blue crab shells, this does not mean the crab harvest will do well or that crab lovers will benefit. This is because studies have shown that the same conditions that lead to increased growth in crab shells also resulted in the production of less meat under those shells. As carbon-absorbing crabs put more energy into building larger shells, less energy goes into other critical life processes like tissue growth and reproduction.