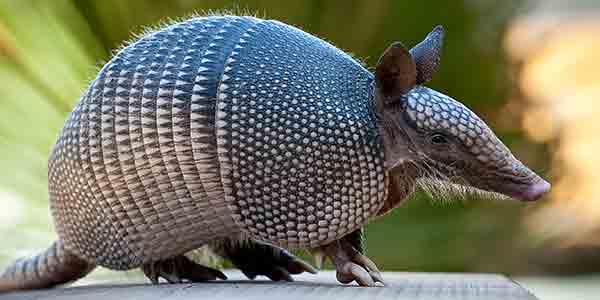 Nine-banded armadillos are found in the southeastern United States, but their range has been expanding continually northward for more than a hundred years. A few have even been spotted as far north as Illinois and Nebraska. Armadillos have not yet reached the full extent of their possible range, which one study has predicted may reach as far north as Massachusetts. Climate change caused by increasing carbon in the atmosphere will further expand their potential range.

They prefer warm, wet climates and live in forested or grassland habitats. Small streams are no obstacle for these amazing animals. The nine-banded armadillo can hold its breath for up to six minutes and can swim or “walk” along the bottom of rivers. Their abandoned burrows are utilized by other animals, such as pine snakes, rabbits, opossums, mink, cotton rats, striped skunks, burrowing owls, and eastern indigo snakes.

These armadillos are generalist feeders and use their sense of smell to track down almost 500 different foods, most of which are invertebrates such as beetles, cockroaches, wasps, yellow jackets, fire ants, scorpions, spiders, snails, and white grubs. A lesser part of the diet is comprised of small reptiles and amphibians as well as eggs of mammals, reptiles, and birds. Less than 10 percent of the diet is from fruit, seeds, fungi, and other plant matter.

Populations of nine-banded armadillos are increasing. Humans have killed off most of their natural predators, and roadways have offered them easier means of travel to new habitats. Nine-banded armadillos have a tendency to jump straight up into the air when they are startled, which often leads to their demise on highways. They are small enough that cars can pass right over them, but they leap up and hit the undercarriage of vehicles. They are also poisoned, shot, or captured by people that consider them lawn and agricultural pests. Some are eaten or used for the curio trade.

Armadillos have long been a source of food for humans. The nine-banded was nicknamed “poor man’s pork” and “Hoover hog” by people who blamed President Hoover for the Great Depression.

Everyday Mysteries, The Library of Congress

Warnell School of Forestry and Natural Resources, University of Georgia