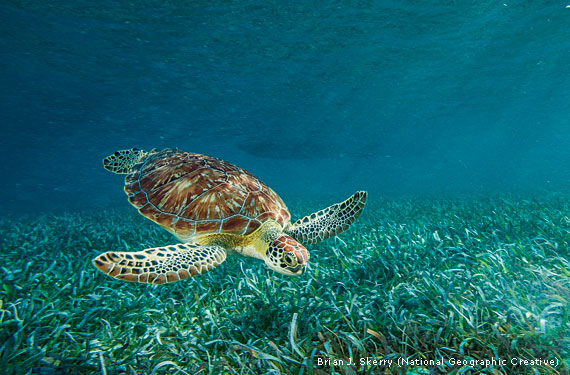 Worldwide, some 60 seagrass species grow in temperate and tropical waters, forming vast meadows that provide critical habitat for sea turtles, manatees and other marine animals. The plants reproduce through the transfer of pollen from male to female flowers, and scientists long thought that ocean currents alone carried the pollen from bloom to bloom. But while watching an underwater video of a seagrass called turtle grass (above, with a loggerhead turtle), researchers at the National Autonomous University of Mexico observed hundreds of tiny crustaceans and other invertebrates visiting the male plants’ flowers. “We saw all these animals coming in, and then we saw some of them carrying pollen,” says marine botanist Brigitta van Tussenbroek. The scientists mimicked the process in laboratory tests, which confirmed initial observations. Ocean currents, they report in Nature Communications, are crucial to the spread of turtle grass pollen, but invertebrate pollinators also enhance the plants’ reproductive success. 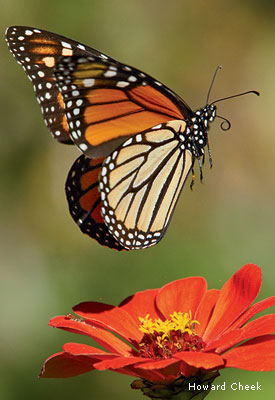 
In a landmark study, University of Guelph biologists have identified the North American birthplaces of migratory monarch butterflies that overwinter in Mexico. By examining chemical compositions of wing tissue samples from more than 1,000 specimens collected over 40 years, the scientists produced the first detailed assessment of where the butterflies developed as caterpillars. Writing in Global Change Biology, they report that the largest number of monarchs, 38 percent, migrate to Mexico from the U.S. Midwest. But the insects’ origins are spread across a wide breeding range in Canada and the United States. “If we just focus conservation activities on the U.S. Midwest,” lead author Tyler Flockhart says, “we will be missing a large number of the butterflies born elsewhere.” The study shows the difficulty of trying to protect a species that ranges over more than a million square miles in three countries. 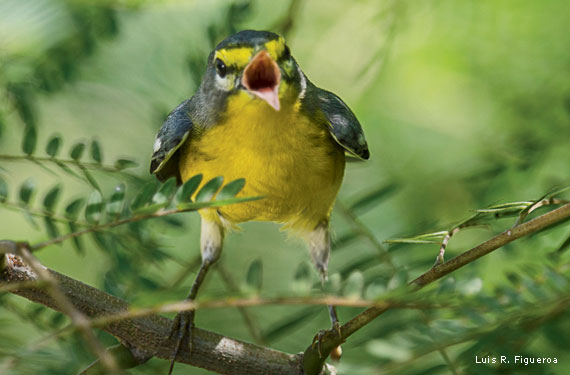 Tuning Up Their Vocal Cords

During breeding season, male Adelaide’s warblers get an early start warming up their vocal cords and rehearsing their mating songs. According to a recent investigation by a team of U.S. researchers, the birds begin trilling through their repertoires of nearly 20 songs in the dark before sunrise. Analyzing the recordings of several males in a Puerto Rico wildlife refuge, the team discovered that repetition and practice had a strong effect on performance quality.

In early versions of particular tunes, “the males didn’t change pitch as quickly as they did in later versions,” San Diego State University ecologist Hannes Schraft reports in Animal Behaviour. “There definitely was an improvement in their singing.” He theorizes that the predawn choruses may help males compete better against their rivals for mates. While previous research has shown that some bird species continually refine their singing skills over several years, the Adelaide’s study is the first to demonstrate that a songbird can improve its performance in a short period of time. 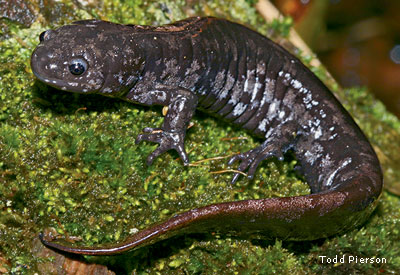 Salamanders lead secretive lives hidden in woodland debris and wetlands. When they emerge briefly in spring to mate, most species stay close to the ponds where they hatched. But biologists at The Ohio State University were surprised to find that some salamanders venture farther from their natal ponds than expected, trekking 6 miles or more and risking their lives in order to mix their genes with salamanders in distant ponds. To better understand how and where the amphibians procreate, the researchers combined studies of the genetic differences between various types of mole salamander with laboratory tests using a tiny treadmill to determine how far each species can walk. They discovered that while some salamanders tired after going short distances, one species, the small-mouth salamander (above), walked nonstop for more than two hours. “That’s like a person lightly jogging for 75 miles before wearing out,” says biologist Robert Denton. Leaving a birthplace for a new habitat, he explains in Functional Ecology, is “a key element of keeping certain species genetically healthy.” The study will help scientists conserve salamanders and their habitats.

Sea Change for Sea Turtles
Monarchs: Peril a Journey's End
The Case of the Disappearing Warbler
A Stormy Love Affair with Salamanders