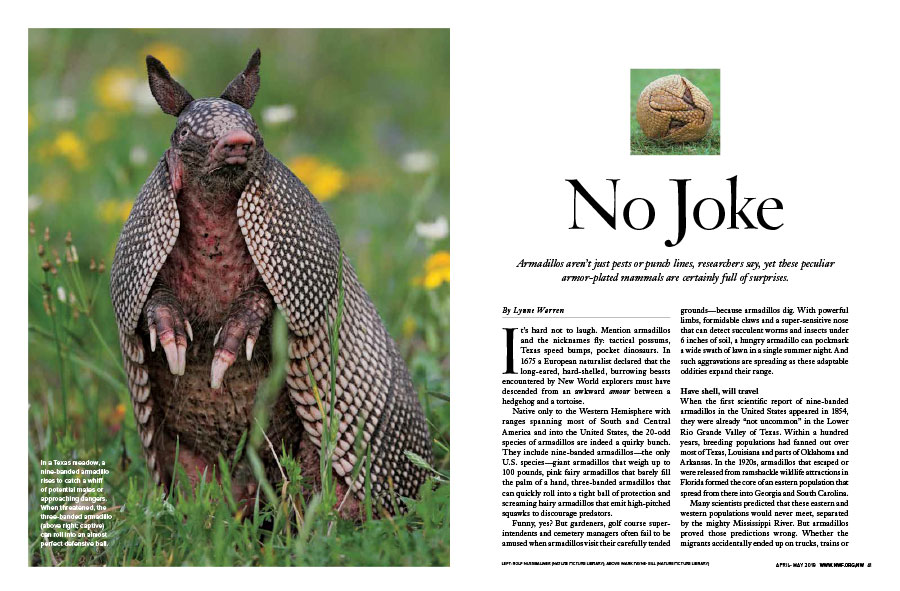 In a Texas meadow, a nine-banded armadillo rises to catch a whiff of potential mates or approaching dangers. When threatened, the three-banded armadillo (above right; captive) can roll into an almost perfect defensive ball.

IT’S HARD NOT TO LAUGH. Mention armadillos and the nicknames fly: tactical possums, Texas speed bumps, pocket dinosaurs. In 1675 a European naturalist declared that the long-eared, hard-shelled, burrowing beasts encountered by New World explorers must have descended from an awkward amour between a hedgehog and a tortoise.

Funny, yes? But gardeners, golf course superintendents and cemetery managers often fail to be amused when armadillos visit their carefully tended grounds—because armadillos dig. With powerful limbs, formidable claws and a super-sensitive nose that can detect succulent worms and insects under 6 inches of soil, a hungry armadillo can pockmark a wide swath of lawn in a single summer night. And such aggravations are spreading as these adaptable oddities expand their range.

Have shell, will travel

When the first scientific report of nine-banded armadillos in the United States appeared in 1854, they were already “not uncommon” in the Lower Rio Grande Valley of Texas. Within a hundred years, breeding populations had fanned out over most of Texas, Louisiana and parts of Oklahoma and Arkansas. In the 1920s, armadillos that escaped or were released from ramshackle wildlife attractions in Florida formed the core of an eastern population that spread from there into Georgia and South Carolina.

Many scientists predicted that these eastern and western populations would never meet, separated by the mighty Mississippi River. But armadillos proved those predictions wrong. Whether the migrants accidentally ended up on trucks, trains or barges—or simply walked across a bridge—by the early 1980s, the “impossible” armadillo meet-up had happened, and the low-slung invaders had established a continuous occupation of much of the southern United States.

That’s where scientists generally assumed the march of the armadillos would end. Because these animals lack thick layers of fur or fat for insulation and have a slow metabolism that weakens their ability to internally regulate body temperature, it seemed unlikely that armadillos would move north into areas with harsher winters. But again, ‘dillos defied expectations.

As armadillo sightings in Missouri multiplied in the late 1980s, surprised Department of Conservation officials there asked Missouri State University biologist Lynn Robbins to figure out how the new arrivals were getting by. Robbins and his team discovered that flexible behavior allowed the animals to cope with unfamiliar conditions. “In winter, armadillos switch their activity patterns almost completely,” Robbins says. “They’re active in daytime when it’s warmest and stay in their burrows at night for protection from the cold.”

Today, U.S. breeding populations range up into Nebraska, Illinois and Indiana, with individual sightings as far north as Minnesota and South Dakota. “As long as the ground isn’t frozen solid and there isn’t total snow and ice cover, armadillos are out there foraging in the leaf litter and finding food,” Robbins says. “They’re adapting.” 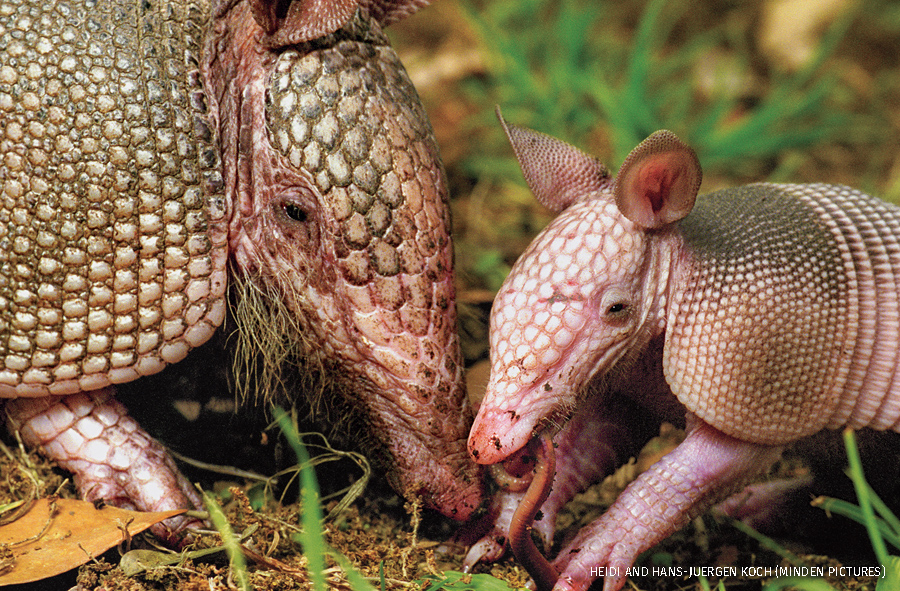 A nine-banded armadillo pup slurps up a worm in Texas. With softer shells than their parents, babies are more vulnerable to predators, and mortality rates are high. Yet these adaptive mammals are expanding their range—perhaps headed to a garden near you.

Humans may have a tougher time adapting to the newcomers, in part due to health fears. Armadillos are the only animals other than humans that can contract leprosy, and in some parts of the United States, 10 to 20 percent of the animals are believed to be infected. Recent research has shown that the bacteria that cause the disease can be transmitted between humans and armadillos. But according to the federal Centers for Disease Control and Prevention, 95 percent of people are immune to the leprosy bacteria, so basic precautions—such as not touching or consuming armadillo meat—make the risk of infection very small.

Despite their weird reputation, these mystery mammals have their fans. For nearly 25 years, biologists Jim Loughry and Colleen McDonough of Georgia’s Valdosta State University have tracked and wrangled armadillos across the southern United States. It’s challenging work: Largely solitary and scattered—with maximum population densities of fewer than two animals per acre—armadillos prefer damp, buggy places. Their earthy coloration makes them hard to see on summer nights when they’re most active, and their leathery armor helps them scramble unscathed through dense underbrush where researchers can’t follow.

Loughry and McDonough admit there’s not much glamour in being armadillo experts. The No. 1 question they get from the public is “whether we’re studying how to get rid of armadillos,” they say, “and interest fades rather quickly when we reply that we are not.” Perhaps if people learned more, they’d come to appreciate one of the most unusual creatures ever to waddle into a backyard.

The only mammals on Earth protected by a carapace—akin to a flexible shell—they exhibit a host of curious characteristics. Unusual backbone structures stiffen their spines and help them brace for fast, efficient digging. And when nine-banded armadillos are startled, they can leap several feet straight up into the air. This may help them escape would-be attackers, but it’s an unfortunate move if the surprise comes from an approaching car. Indeed, Loughry and McDonough say many people have never seen a live armadillo and are familiar only with “the upturned carcasses splattered by the sides of seemingly every roadway in the South.”

Roadways aren’t the only hazard. Alone among vertebrates, armadillos produce their offspring in litters of genetically identical quadruplets. Young born in spring will be independent by fall—if they survive. Coyotes, bears, bobcats and other predators stymied by adults’ tough coverings can more easily puncture the thinner shells of pups. Survivors generally don’t begin breeding until they’re two or three, and females rarely produce litters two years in a row. With this relatively low reproductive rate and high juvenile mortality, “it’s rather amazing,” Loughry and McDonough say, “that armadillos have so successfully colonized the United States.”

Researchers say armadillos are still expanding their range by about 2.5 miles per year. Shifts in climate may aid that spread—or shut it down. Animals moving north are experiencing milder winters, but deserts remain no-go zones because access to a generous supply of fresh water and the insect life that flourishes in moist soils is “an absolute necessity” for armadillos, says Robbins. On the western edge of their range, arid conditions that characterize the Great Plains have moved east by nearly 150 miles in recent decades, making areas that once might have been hospitable to armadillos distinctly unwelcoming. “They’re not adapting out of that,” Robbins warns.

“Climate uncertainty makes it much more difficult to predict the future distribution of armadillos,” Loughry adds. Perhaps more certain: This spring, gardeners in a growing number of states may be in for surprise encounters with armored newcomers in search of a feast. 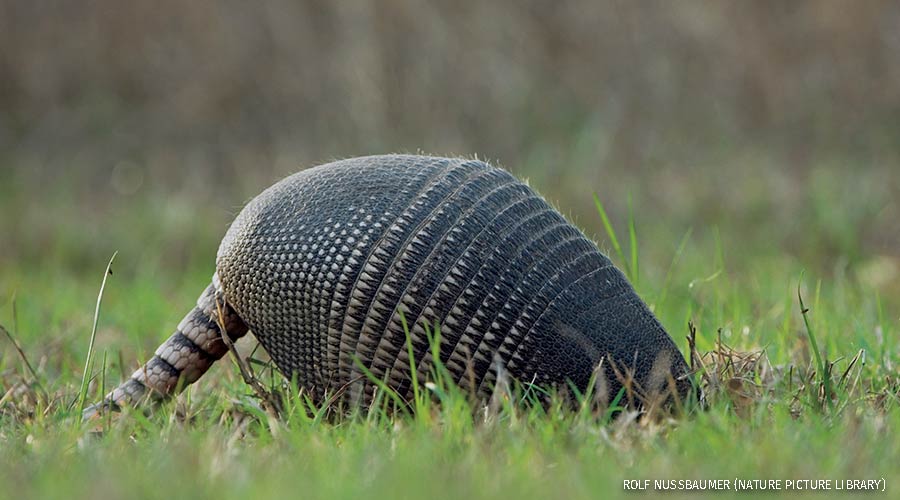 Especially during summer dry spells when hard-baked soils make insect meals tough to find, a well-watered garden can smell like a buffet to hungry armadillos (like the nine-banded digger above). They don’t mean to hurt your plants; they just want your bugs, and sometimes they help control grubs and other pests. To avoid armadillo distress—theirs or yours—try these strategies.

Exclude and confuse. Fences extending well below ground can frustrate burrowers and shield plants from disturbance. Capsaicin-based repellents can interfere with the odors armadillos rely on to direct their digging.

Water thoughtfully. Emphasize native plants to help limit the need for watering. If you must, water early so when armadillos come out to search for food at dusk, the ground will have dried a bit, and it will be less tempting.

Stay safe. The chance of contracting leprosy in the United States is extremely low, but to minimize risk, avoid handling or consuming armadillo meat and call local wildlife control for guidance if you need to dispose of an armadillo carcass found on your property.

Lynne Warren wrote about contemporary artists and conservation in the December–January 2019 issue.