Each ballot cast in an election can have lasting impact on our nation’s health, environment and frontline communities. 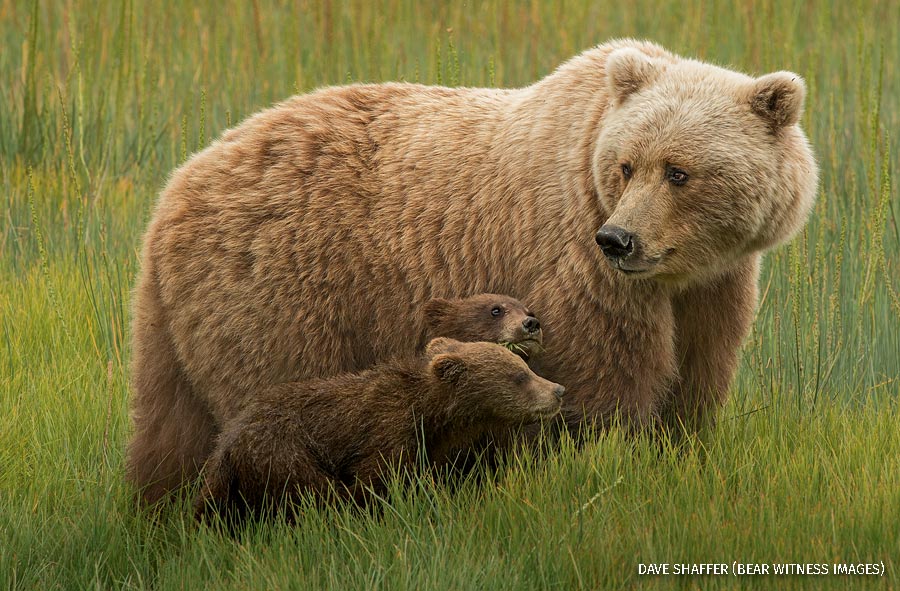 A coastal brown bear keeps a close eye on her cubs at Alaska's Lake Clark. Wildlife as well as people will be impacted by results of the 2020 elections.

THIS YEAR HAS BROUGHT NO SHORTAGE of unprecedented challenges. But even before the novel coronavirus emerged, we knew that 2020 would present a historic opportunity to shape our future.

Recent history shows how much it matters to elect officials who prioritize our National Wildlife Federation mission: ensuring that wildlife thrive in a rapidly changing world. This November, we’ll be voting not just to determine who will lead us out of a pandemic but who will also guide us in addressing a number of profound and urgent conservation challenges.

Our next president and Congress will face daunting problems across all sectors of society, including many that NWF has long sought to address: combating climate change, tackling environmental justice, protecting clean water, recovering wildlife and restoring public lands. We need elected officials to confront these challenges head-on, following the guidance of scientists and community leaders.

The Federation encourages you to talk to candidates about their proposed solutions to these problems. We also ask that you vote and do what you can to ensure all ballots are counted. A democracy depends on the engagement of its citizens, and this November, the stakes could not be higher.

“Choices made at the ballot box will determine if we can solve the environmental challenges we face.”—Collin O'Mara

The world’s scientists have made clear the urgent need to significantly draw down greenhouse gas emissions to avert catastrophic climate change. This translates to cutting emissions roughly in half during the next decade and to net-zero by midcentury—a challenging goal that will require a coordinated global effort.

The United States must lead the way toward attaining the broad economic transformation needed to combat climate change. By prioritizing investments that are climate- and worker-smart and that lift up low-income communities and communities of color, the next president and Congress can help speed the transition to net-zero emissions in an inclusive and lasting way. We need our elected officials to heed the science and work in partnership to achieve a clean, equitable and safe future that meets our climate challenges.

During Hurricane Katrina, many homes floated off their foundations in New Orleans’ Lower 9th Ward, a predominantly Black neighborhood hit hard by the 2005 disaster.

We are seeing a historic awakening as people across all ages, races, abilities and incomes come together to stand up against the injustice and systemic racism embedded in our society for far too long. From climate change to pollution to COVID-19, current policies have disproportionately harmed people of color and in low-income communities—and Americans are demanding change.

When we address climate change, we have the ability to simultaneously address environmental injustice by improving air and water quality in communities impacted the most by pollution and by targeting clean energy development in communities of color and vulnerable rural communities. Such investments can provide a path forward with sustainable, good-paying jobs. Similarly, when elected officials prioritize projects that restore natural systems, they also help create jobs in rural or other lower-wealth communities.

We must keep as a central focus and not underestimate the effects of decades of disinvestment as well as today’s cumulative impacts of pollution, COVID-19 and racial injustice on frontline communities. Just as voting-rights issues and voter suppression continue to plague our democracy, environmental injustice will remain a crisis until we all demand action from every elected official, in every election.

On the lookout for prey, a great blue heron wades through a slough in Florida’s Everglades National Park. Waterways such as these are vital for both wildlife and people.

Global health crises such as the current pandemic remind us of the critical importance of access to clean water. Yet instead of doing more to strengthen clean-water and public health safeguards, the present administration has worked to dismantle the Clean Water Act and underinvest in vital water cleanup and restoration programs. From removing protections for thousands of miles of streams and more than half our nation’s wetlands to undermining states’ and tribes’ authority over their waters, these changes return us to the lowest levels of protections since the Clean Water Act became law nearly 50 years ago.

This November, we must elect decision-makers who understand the importance of clean water for healthy communities and thriving wildlife populations. These leaders will have a chance to reverse damaging rollbacks and strengthen protections for our nation’s wetlands, rivers and streams—the same water bodies that provide drinking water to millions. The election also provides an opportunity to reinvest in America’s outdated water infrastructure (which needs more than $743 billion in repairs to meet current standards) as well as in natural infrastructure such as living shorelines—investments that would keep our waters healthy, enhance wildlife habitat and create quality jobs.

A swift fox kit snuggles close to its mother on a Colorado grassland. This canid is among scores of species that would benefit from the Recovering America's Wildlife Act.

According to a recent United Nations report, some 1 million species may be threatened with extinction in the coming decades. Reversing this crisis requires immediate, coordinated action. Wildlife need our elected officials to create, update and fund wildlife laws, oversee their implementation and defend them against attacks that seek to weaken protections.

This year, more than 180 members of Congress rose to the challenge, co-sponsoring the bipartisan Recovering America’s Wildlife Act, which would fund state and tribal plans to manage at-risk wildlife—restoring populations and preventing declines of species such as the swift fox and monarch butterfly. In both chambers of Congress, officials voted to fund wildlife crossings over and under highways and to maintain wildlife corridors on private and tribal lands, benefiting both public safety and wildlife health.

These and other conservation wins have been made possible by elected officials from both parties who care about wildlife. If we are going to address the biodiversity crisis before it’s too late, we need to ensure that wildlife have a voice in this election and that the next Congress and administration prioritize and pass into law ambitious legislation such as the Recovering America’s Wildlife Act.

Pronghorn pause from their foraging in Colorado’s Gunnison Basin, a 2.5 million-acre montane habitat managed largely by federal agencies for the benefit of all Americans.

Our public lands belong to all of us. National parks, monuments, forests, wildlife refuges and grasslands provide clean water, fish and wildlife habitat, sacred grounds for tribal cultures and places for our families to enjoy the outdoors. The federal government is responsible for managing these lands sustainably, for us and for future generations.

We need local, state, tribal and national leaders to help keep public lands in public hands. We must build on successes such as the recent Great American Outdoors Act, which, after 56 years, finally fully funds the Land and Water Conservation Fund and addresses a backlog of maintenance needs in our national parks, refuges and forests. This is the kind of bipartisan, future-focused legislation our country so desperately needs. An administration and Congress that will build on this success is up to us, the voters. We must elect officials who will work for public lands and for our future.