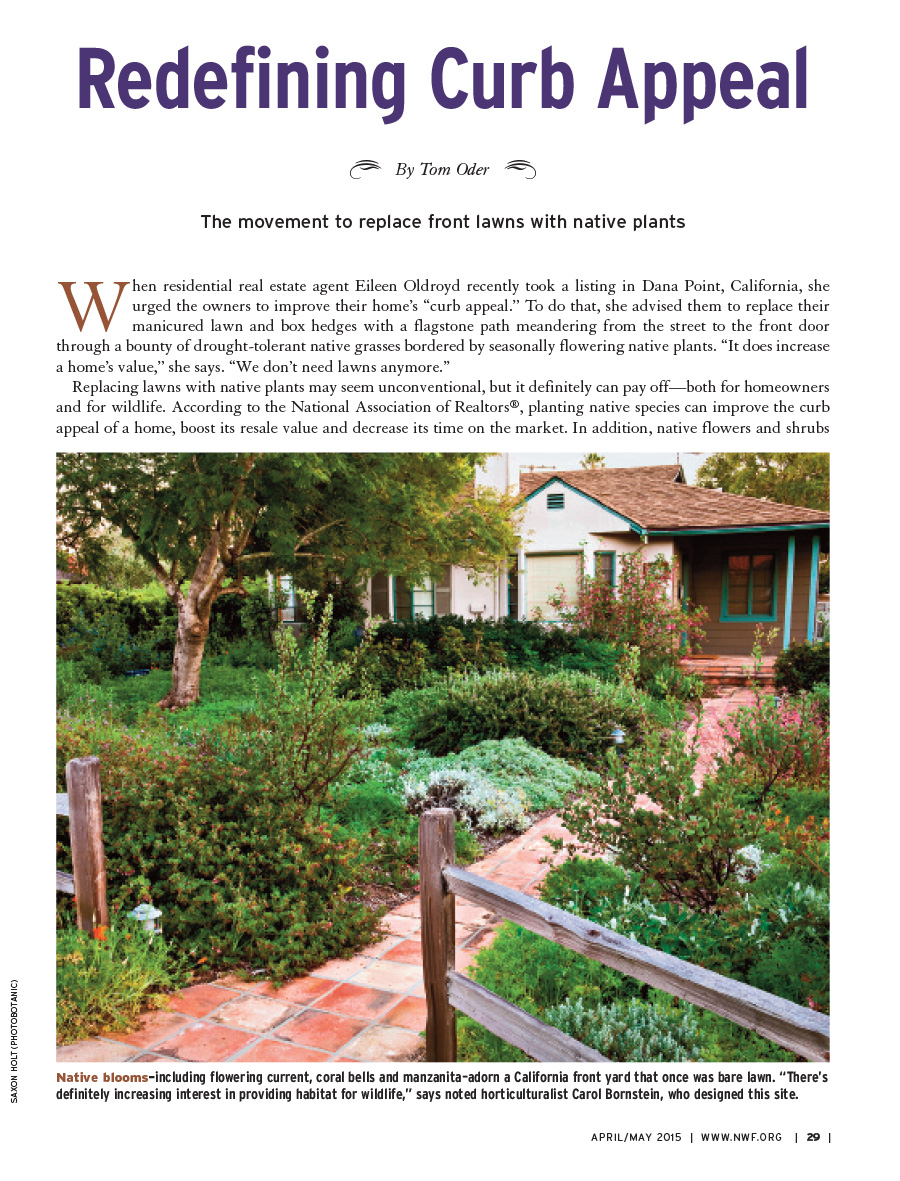 WHEN RESIDENTIAL REAL ESTATE AGENT Eileen Oldroyd recently took a listing in Dana Point, California, she urged the owners to improve their home’s “curb appeal.” To do that, she advised them to replace their manicured lawn and box hedges with a flagstone path meandering from the street to the front door through a bounty of drought-tolerant native grasses bordered by seasonally flowering native plants. “It does increase a home’s value,” she says. “We don’t need lawns anymore.”

Replacing lawns with native plants may seem unconventional, but it can pay off—both for homeowners and for wildlife. According to the National Association of REALTORS®, planting native species can improve the curb appeal of a home, boost its resale value and decrease its time on the market. In addition, native flowers and shrubs provide vital habitat for birds, insect pollinators and many other species. Yet convincing homeowners to make the switch can be a tough sell, mainly because of the perception that lawns are elegant while natives are sloppy.

One man is working hard to change that perception. Doug Tallamy, a professor of entomology and wildlife ecology at the University of Delaware, is on a mission to change the definition of curb appeal—a term, he says, that typically implies “a full view of the front of the house, which by default is an open lawn.” 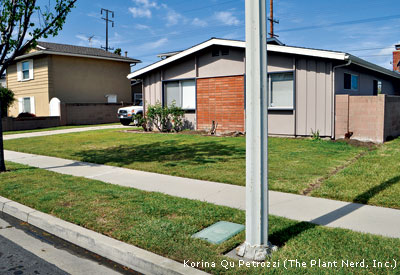 Tallamy, the passionate voice of America’s native-plant movement, advocates minimal lawn and lots of trees, shrubs, flowers and ground covers that are native to a particular region. He argues that such indigenous plants are just as beautiful as the nonnatives that dominate our nurseries and landscapes. Natives are also more environmentally friendly: Manicured lawns (right) require copious amounts of water, fertilizer and weed killer as well as mowing and blowing by carbon-emitting machines, all to create what are dead landscapes for wildlife.

Not all of Oldroyd’s clients are convinced, however, even though the natives she recommends are drought tolerant, a plus in the arid West. Hesitation to “go native” highlights what Tallamy says is the movement’s biggest challenge: overcoming eight myths that discourage people from using native plants in front yards. Here are his rebuttals for each:

There are tricks to adding natives without sacrificing aesthetics. First, cultivate dense layers and groupings instead of single plants. This prevents a scraggly look while maximizing the biodiversity that the landscape will support. Put a small patch of lawn only where you will walk, then plant everything else to create tidy outdoor “rooms.” Ground covers provide the floors, arching limbs create the ceilings and woody plants, trees and shrubs build the walls. Be careful not to use too many herbaceous plants, which die to the ground in winter. Woody plants also support more animal diversity than herbaceous ones, and their year-round stems help define outdoor rooms even in winter.

Some feel that dense plantings can’t be attractive. This may be true of single-species hedges, but a rich mix of species can create vivid, living walls that add both aesthetic appeal and natural fencing between neighbors. Tallamy recommends a mix of plants such as dogwood, red maple, river birch, silverbell, possumhaw viburnum and shumard oak. You might also weave in some coral honeysuckle, eastern red cedar, inkberry, American holly and American rhododendron. Such combinations will yield year-round interest and provide food and shelter for a host of native insects, birds and mammals. 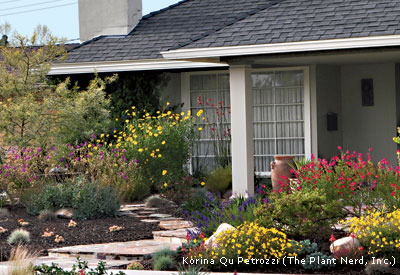 “Formality is a function of the design, not the plant species,” says Tallamy. Denver’s Centennial Gardens are patterned after the formal French gardens of Versailles yet showcase native species. And many formal European gardens incorporate species imported from North America such as beech and goldenrod.

Tallamy’s studies show that native plants suffer no greater damage from plant-eating pests than do nonnatives and may in fact be healthier because they foster a more balanced ecosystem. Natives do host many indigenous herbivorous insects such as caterpillars, but these plant eaters in turn attract native predators—such as birds, assassin bugs, preying mantids, ladybird beetles and parasitic wasps—that keep the herbivores under control. In contrast, imported nonnatives, such as azaleas, may host nonnative pests that have few predators. With no natural enemies, “the azalea lace bug is the No. 1 pest in the eastern United States,” says Tallamy.

Many people worry that natives will attract unwelcome visitors such as rats and snakes. But all plants—native or not—will attract wildlife, including bees that may sting or birds that may splatter the car. To counter irrational fears of vermin, Tallamy notes that in 2012 only one person in the nation died from a snake bite whereas 791 were killed by toasters and 33,000 by the common cold. Still, fear of snakes likely trumps fear of toasters, so this myth may die hard.

No one can categorically claim that natives are prettier than nonnatives, but it’s hard to deny the beauty of spires of purple blazing star, clusters of red cardinal flowers, masses of sky-blue lobelia or patches of pink Joe Pye weed—plants that are native to many parts of the United States and equally stunning in unstructured meadows or formal beds. Beyond beauty, natives that bloom from April to September will support pollinators, while native woody and herbaceous plants will sequester carbon, provide shade and support a range of birds and other species—lovely pluses for native wildlife.

Neighbors scorn mess, regardless of the source. “The problem with the native-plant movement is that people think they can stop mowing their lawns and just sprinkle seeds from prairie-in-a-can,” says Tallamy. “But we’re not suggesting you abandon landscaping. You do have to fit in with the cultural norms.” If well tended, natives can be tidy and beautiful enough to please the neighbors—not to mention the hummingbirds and butterflies.

Of all the myths, this is the least “mythy,” says Tallamy. Mass-produced nonnatives like impatiens are cheap, and that economy of scale doesn’t yet exist for many natives, which are often sold by conservation groups to raise revenue. Still, an acorn from an indigenous oak is free, and neighbors may be willing to share cuttings of fast-spreading natives. Ultimately, a lawn—with sodding, seeding, mowing, fertilizing and weeding—is costly and also can absorb heat that may boost air-conditioning costs, not an issue when native plants and trees abound.

If those aren’t enough reasons to go native, Oldroyd notes two more: “In parts of California, there’s a lot of peer pressure to get rid of lawns as a way to save water,” she says, “and some water districts are giving rebates for every square foot of grass removed.” Tallamy—and the local wildlife—would no doubt approve. 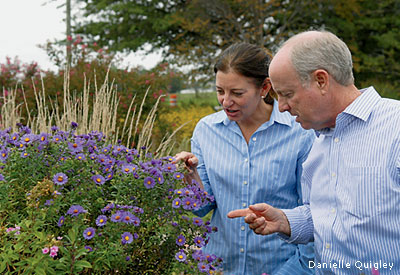 University of Delaware entomologist Doug Tallamy (with colleague Jules Bruck, right) has spent years studying how native plants benefit wildlife. Tallamy worked with the National Wildlife Federation and the U.S. Forest Service to create a tool —available now—that allows gardeners and other nature lovers to identify by zip code the best native plants for wildlife. Specifically, Tallamy reviewed the scientific literature to identify which trees, bushes and other plants host the greatest number of lepidopteran larvae (caterpillars of moths and butterflies)—the primary food for birds when they are migrating or raising young.

“We are excited to provide this tool so gardeners will know which plants can most help birds and butterflies thrive in their communities,” says NWF Naturalist David Mizejewski.

Writer Tom Oder lives in Georgia and covers gardening and the environment.