Action Report: How NWF is Making a Difference

NWF, its affiliates and partners are working for wildlife, from returning bison to tribal lands to protecting deer from disease 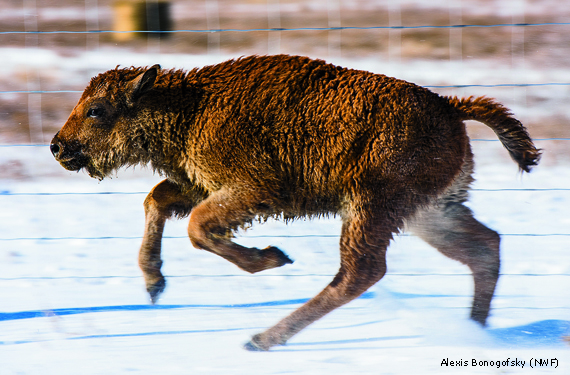 Relocations and a new treaty help restore herds of buffalo

The Assiniboine and Sioux Tribes welcomed 136 bison (including the young bison above) to the Fort Peck Reservation in Montana last November. This group of bison—the second since 2012—brings the reservation’s herd to nearly 200, the largest herd of genetically pure plains bison outside of Yellowstone National Park.

Bison that wander out of Yellowstone are in danger of being shot because ranchers fear bison might transfer the disease brucellosis to cattle. To protect wandering bison, media executive Ted Turner volunteered to hold a group of the animals on his ranch for five years to ensure they were free of disease before being transferred to other locations. NWF—with support from members—contributed to the costs of transporting some of the bison to Fort Peck as well as fencing and grazing allotments. The Assiniboine and Sioux Tribes will now grow the herd to help seed others on tribal lands.

“In two years, since we welcomed back the first Yellowstone buffalo, we’ve seen the ecosystem revive,” says Robert Magnan, director of the Fort Peck Tribes’ Fish and Game Department. “Grassland birds have returned and native grasses are thriving.”

Last September, to further restore bison across their former range, 11 Native American tribes and Canadian First Nations signed the Medicine Line Northern Tribes Buffalo Treaty—the first treaty among them in more than 150 years—to work together to bring bison back to their lands and restore the animals’ role in tribal community health, cultural traditions and economies. “Getting wild bison to new landscapes is vital for the sustainability of the species and the tribes,” says Garrit Voggesser, NWF’s tribal partnerships director.

To learn more about long-term efforts by NWF, tribes and other conservation partners to restore bison, visit www.nwf.org/tribalbison. 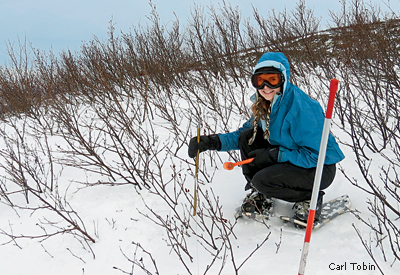 In 2014, NWF launched EcoLeaders, the only Web-based initiative to give college students a platform to initiate or join conservation projects and earn certification for their environmental leadership.

Now with nearly 500 participants and growing, “EcoLeaders is a unique space that empowers and connects college students who are passionate about conserving the environment,” says NWF’s Kristy Jones, the program’s senior manager.

Participants can declare a personal eco-mission and engage in activities such as reducing energy and water use on their campus or creating wildlife habitat in their communities. They can also join forums to discuss environmental issues or projects. For example, on the EcoLeader’s website, Alaska Pacific University graduate student Christina Rinas (right) described her research tracking changes in shrub distribution and abundance in Alaska’s Chugach Mountains and has since had other students inquiring about her work. “Ecoleaders helped me think about how to convey my research,” she says. “It gives you a way to connect with people you wouldn’t have otherwise.”

NWF awards students who complete their goals a digital badge to post on resumes and social media. To join the community, visit www.nwfecoleaders.org.


Learn About Living with Wildlife

Whether you live in a big city or a rural town, you’re surrounded by wildlife. Recognizing this, the National Wildlife Federation will celebrate the joys and challenges of “Living with Wildlife” during its 77th National Wildlife Week, March 9 to 15. To learn about animals you might see in your neighborhood and discover how your support of NWF is protecting wildlife, visit www.nwf.org/wildlifeweek. 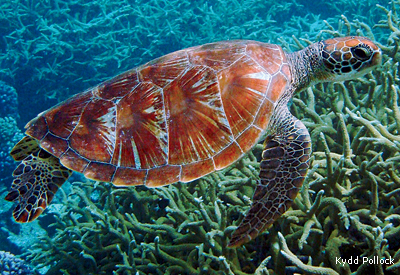 NWF joined 40 other national conservation organizations—including its affiliate Conservation Council for Hawai‘i (CCH)—as well as more than 400 scientists and Native Hawaiian leaders in favor of the expansion. CCH Executive Director Marjorie Ziegler says doing so was important because “we rely on the ocean to sustain us. It supports species that are ecologically, culturally and economically significant.”

Known for its unmatched biodiversity, the marine protected area supports a bounty of marine life, including sharks, manta rays, 22 marine mammal species, 14 million seabirds and five species of sea turtle (such as the threatened green turtle, above). Commercial fishing and resource extraction such as deep-sea mining are prohibited within the monument. However, waters outside the protected area can be fished, and the region remains vulnerable to climate change effects.

“While there is certainly more to do here, President Obama has signaled America’s commitment to ensuring the longer-term survival of ocean life for future generations,” says Les Welsh, NWF’s Pacific Region associate director. Go to www.conservehi.org to learn more.


Ahead of the Storm 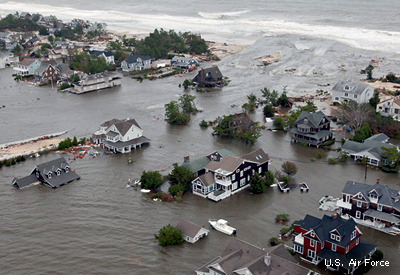 As global climate continues to change, communities and natural areas are increasingly at risk from more intense storms, sea level rise and the kind of flooding that hit New Jersey after Hurricane Sandy (right). However, NWF and partners recently released two guides showing how proactive approaches to strengthen the resilience of natural infrastructure can reduce the devastating impacts of such disasters. These steps can save “not only money, but lives,” says Patty Glick, NWF’s senior climate change specialist.

Best Practices for Climate Change Adaptation: Spotlight on Michigan Coastal Wetlands—coauthored by NWF and the Great Lakes Commission—offers 18 recommendations for how coastal managers can optimize wetland protection and restoration. The guide also provides case studies and summarizes the benefits and challenges of each practice. Go to www.nwf.org/climate-smart/adaptation to download the reports. 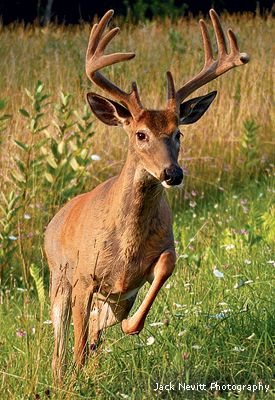 In September, the Missouri legislature upheld State Governor Jay Nixon’s decision that deer held in captivity at hunting and breeding facilities would continue to be managed as wildlife by the state’s Department of Conservation (DOC) rather than as livestock by the state’s agriculture department. In addition, the state will no longer allow captive deer to be transported into Missouri.

“By leaving deer as wildlife under the control of the Department of Conservation, politics cannot come into play in the scientific management of any white-tailed deer, wild or captive,” says Brandon Butler, executive director of Conservation Federation of Missouri (CFM), the NWF affiliate that spearheaded public support of this decision. “It is important that the DOC manages both to keep diseases from spreading between the two populations.”

Chronic wasting disease can be transferred to wild white-tailed deer, mule deer, elk and moose through fences or when captive animals escape. NWF is collaborating with CFM and many other affiliates to halt the disease, in part by supporting laws that prohibit deer and other cervids from being transported across state lines.

Go to confedmo.org/programs/legislation/cwd to learn more. 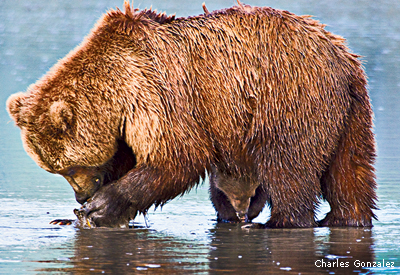 Nearly 66 percent of Alaska’s voters supported a November ballot initiative to require state legislative approval for any large-scale mining proposed for the Bristol Bay Fisheries Reserve watershed. This is a significant victory for those opposing Pebble Mine, which mining companies proposed to extract billions of tons of gold, copper and other minerals from the headwaters of rivers in the heart of the reserve.

Large-scale mining in the region would have a high potential of polluting the Bristol Bay watershed, the world’s largest sockeye salmon fishery and spawning grounds for 34 other fish species. The reserve also provides food for Native Alaskans and wildlife (such as brown bears, right) and contributes almost $1.5 billion to the nation’s economy.

Renewable Resources Coalition and Foundation (RRC/RRF), an NWF affiliate, has fought to protect the Bristol Bay for a decade, most recently leading a campaign to inform residents about the ballot initiative. Opposition to Pebble Mine grew over time. In 2013, international mining giant Anglo American withdrew from the project. With dwindling support and passing of the ballot initiative, “this project is a sinking ship,” says Anders Gustafson, RRC/RRF executive director. For updates, go to www.renewableresourcesfoundation.org.

The No. 1 nature and animal magazines for kids are now available on mobile phones and tablets.

Just like the print editions, the digital issues are packed with fun facts, unforgettable animal adventures and amazing nature photos as well as cool crafts, games, puzzles, jokes and comics—all in a digital format that is easy to access for on-the-go fun.

Go to www.nwf.org/kids/kids-apps to learn more and find both titles on Google Play, iTunes or Amazon Kindle.


Join NWF at Its Annual Meeting

The National Wildlife Federation will hold its 79th Annual Meeting from March 27 to 29 at the U.S. Fish and Wildlife Service’s National Conservation Training Center in Shepherdstown, West Virginia. NWF members are invited to join us, our state affiliates and other partners to discuss the critical issues facing wildlife and how to advance wildlife conservation across the nation. Registration closes February 26. Go to www.nwf.org/annualmeeting for further details and agenda.

Don’t forget to renew your NWF membership, or give one as a gift. Each membership includes a one-year subscription to National Wildlife magazine. Go to www.nwf.org/joinnwf.