Glowing organisms have captured our curiosity for centuries, yet scientists are still discovering how they glow—and why 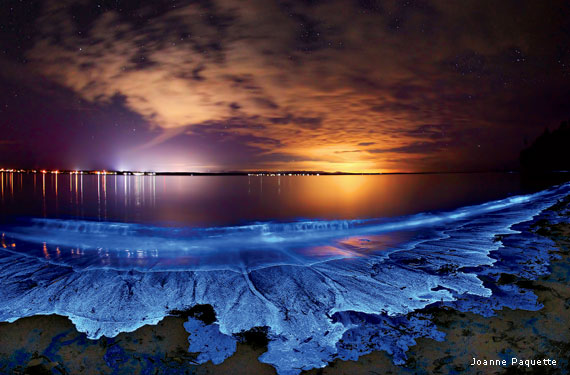 LIKE THE FLICKERING FLAMES OF A CAMPFIRE, luminous life-forms captivate us. Greek philosopher Aristotle first described “fiery” fungi and fish in his treatise De Anima (On the Soul). More than two millennia later, scientists are still discovering new species and what makes them glow—revelations that are changing how we perceive the world.

Fluorescent organisms absorb light and emit it as a different wavelength and color. Bioluminescence is produced through a chemical reaction: a molecule (usually luciferin) is catalyzed by an enzyme so that it reacts with oxygen and releases photons.

Plants and animals that glow do so to lure prey, deter predators, find mates or otherwise communicate. While luminous life is rare on land—including some bacteria, algae, worms, beetles, snails, centipedes and millipedes—more than half of marine organisms, from plankton to sharks, make their own light. Most creatures below about 650 feet must, for as sunlight travels through water, red, orange, green and yellow wavelengths are filtered out until only blue remains. As deep-sea explorer and researcher Edith Widder says, the ocean hosts “the ultimate game of hide and seek.”

Fluorescence and bioluminescence produce energy but no heat. Researchers are tapping into this cold light’s power: They have used fluorescent jellyfish proteins to track neurological impulses and bioluminescent bacteria to test water quality. Yet as marine biologist David Gruber says, luminous life becomes “richer and more mysterious as we study it. If you only see the world from the human spectrum, you are going to lose a lot of the story.”

Indeed, every year tourists travel to view a “bio bay” on St. Croix, one of the world’s few bioluminescent bays that shimmer with plankton. The Virgin Islands Conservation Society (VICS), a National Wildlife Federation affiliate, is fighting to protect this bay from the light pollution and silt that could result from building a proposed educational facility on adjacent U.S. National Park Service land. As VICS’s Michael Baron says, “It would be such a shame to let this little jewel go.”

How and Why Life-forms Glow 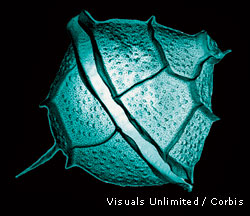 Burglar Alarm. Bioluminescent bays such as Australia’s Jervis Bay are rare, fragile ecosystems. They glow bluish green when one-celled plankton (dinoflagellates, right, colorized) flash in response to motion from waves or predators. The light can scare away attackers or attract larger predators that eat the plankton-eating foe. 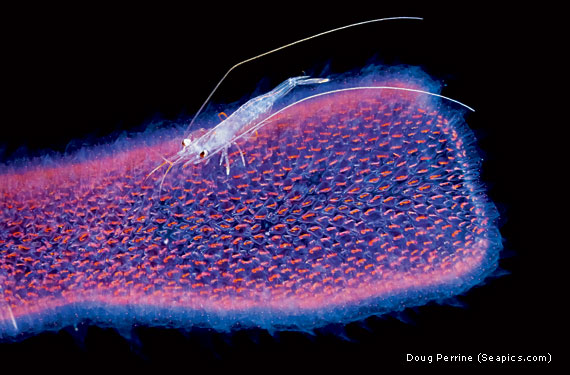 Group Chat. In the depths off Kona, Hawai‘i, a pelagic shrimp rides a pyrosome, a colony of hundreds of filter-feeding organisms called zooids. The bioluminescent colonies—which can be dozens of feet long—pulse with light from end to end when touched or in response to another pyrosome flashing nearby. 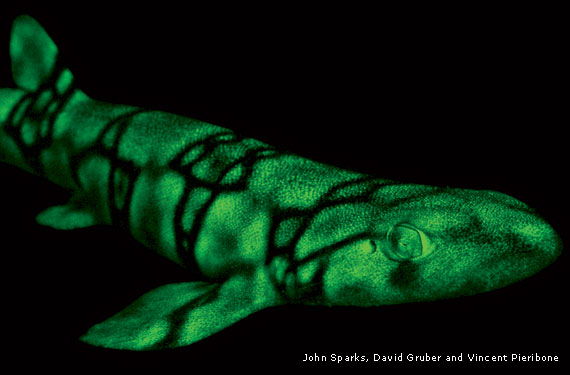 Courtship. A chain catshark at Connecticut’s Mystic Aquarium glows a fluorescent green. American Museum of Natural History marine biologists John Sparks and David Gruber recently discovered more than 200 species of fluorescent fishes, including the catshark, and the first known fluorescent reptile, a hawksbill turtle. They are finding that distinct patterns of male and female catsharks could allow them to recognize the opposite sex 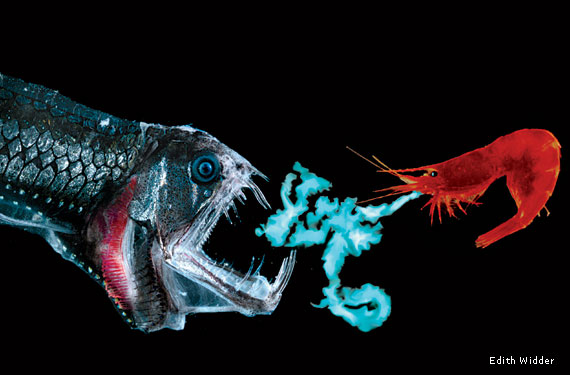 Defensive Decoy. This composite photo by deep-sea explorer Edith Widder shows how some marine shrimp such as Acanthephyra purpurea (right) spew bioluminescent fluid (colorized) “like a fire-breathing dragon” to temporarily blind predators such as viperfish (left) with a lingering blue cloud so the shrimp can escape. The fluid is formed in a liverlike organ called the hepatopancreas, squirted into the shrimp’s stomach and then regurgitated. 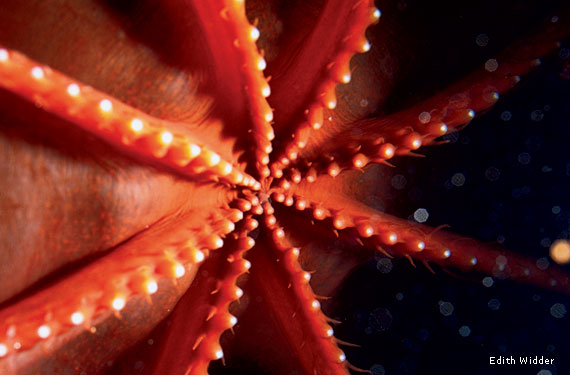 Illumination and Camouflage. Researchers discovered one of the only known bioluminescent octopi, Stauroteuthis syrtensis, thousands of feet beneath the surface in the Gulf of Maine. Its suckers may have evolved into light organs, called photophores, to attract mates or its favorite food, copepods. 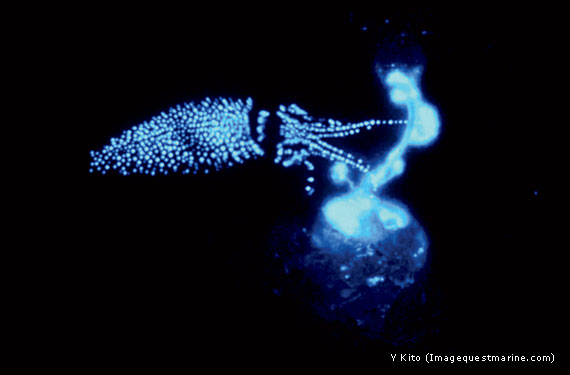 Firefly squid (bottom) spend the day near the ocean floor but then come close to the surface at night to feed. As moonlight penetrates the water, the blue light shining from photophores on their bellies counterilluminates the animals, blurring their outlines against the shimmering surface water so that predators are challenged to find them. 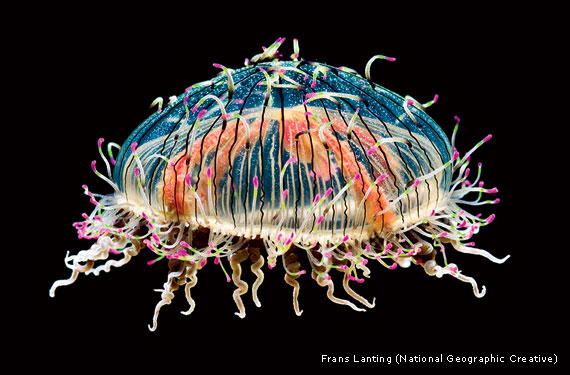 Luring Prey and Thwarting Predators. Jellyfish can be fluorescent or bioluminescent, or both. Marine researchers Steven Haddock and Casey Dunn determined that juvenile rockfish are seven times more likely to attack the flower hat jellyfish’s candy-colored tentacles when their fluorescent tips are illuminated. The jellyfish’s poisonous, stinging appendages then turn these would-be predators into prey 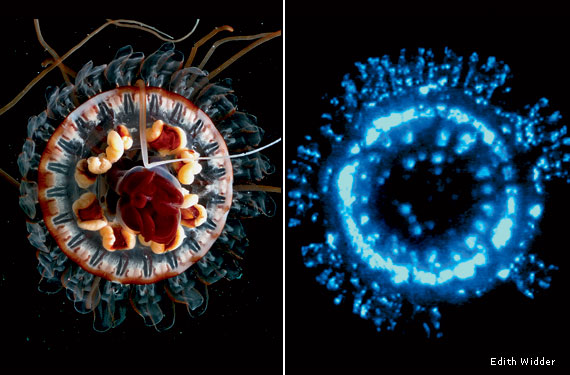 When threatened, Atolla vanhoeffeni jellyfish (left) flash like a blue pinwheel (right) to ward off predators. Like most marine life in ocean depths below 650 feet where sun and moonlight cannot reach, the rest of the animal becomes invisible. 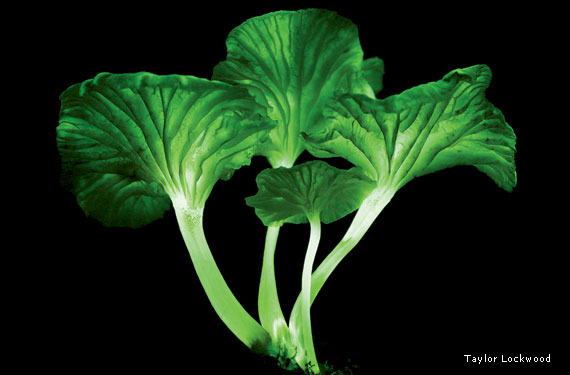 Propagation and Protection. Taylor Lockwood has crawled through dark rain forests around the world to capture a “bug’s-eye view” of many of the nearly 100 species of bioluminescent mushrooms, including the Mycena lucentipes (above) in Brazil. While this species glows steadily around the clock, the Brazilian Neonothopanus gardneri mushroom conserves its energy during the day to glow brightest at night. The light is alluring to insects that could help disperse the mushrooms’ spores yet warns fungi-eating arthropods that this potential food is unsavory. 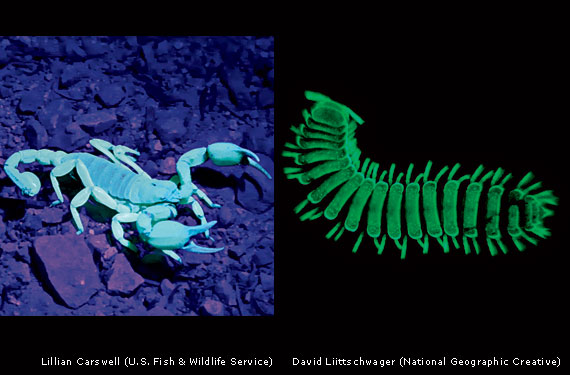 Coping Mechanisms. Scorpions (above, left) are nighttime hunters whose bodies absorb ultraviolet (UV) moonlight, causing them to glow blue-green. Research suggests this is why the animals hunt less actively on bright nights, when they would be more visible to prey. In bioluminescent millipedes, the more cyanide they contain, the brighter they glow, a warning they are toxic. Entomologists recently discovered that brightly lit millipedes—such as Motyxia sequoiae (above, right)—evolved later than dimmer millipedes and live at higher, cooler elevations among more predators. This could indicate that the shift to brighter bioluminescence was an adaptation to protect against predation. 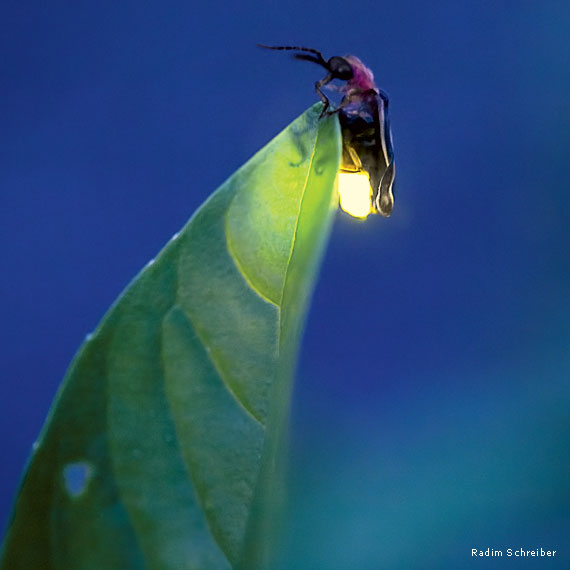 Femmes Fatales. All firefly larvae have a bioluminescent glow that signals to predators they taste bad, yet only some of the adult beetles flash to attract mates. Though each firefly species has a unique signal, some female Photuris imitate the flashes of other species to lure males that become meals.

Chasing the flash of fireflies is a fond summer pastime, but University of Florida entomologist Marc Branham is receiving reports of fields and backyards now void of the beetles’ light. “Firefly numbers seem to be falling,” says Branham, perhaps due to light pollution that prevents fireflies from finding each other. If these scenes fade to black, the loss would be great. For fireflies, and so much more living light on our planet, Branham says, “we are still scratching the surface of understanding their behavior and evolution.”