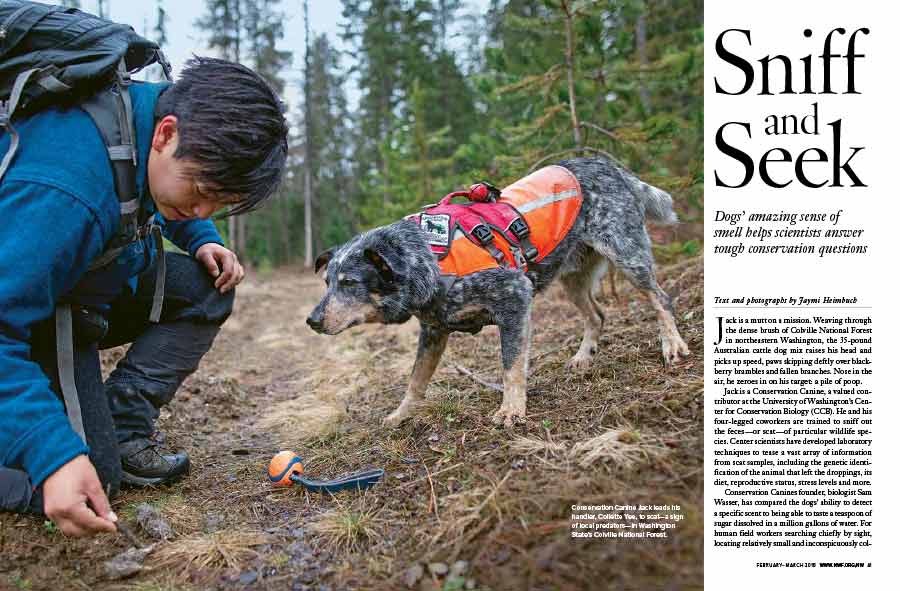 JACK IS A MUTT ON A MISSION. Weaving through the dense brush of Colville National Forest in northeastern Washington, the 35-pound Australian cattle dog mix raises his head and picks up speed, paws skipping deftly over blackberry brambles and fallen branches. Nose in the air, he zeroes in on his target: a pile of poop.

Jack is a Conservation Canine, a valued contributor at the University of Washington’s Center for Conservation Biology (CCB). He and his four-legged coworkers are trained to sniff out the feces—or scat—of particular wildlife species. Center scientists have developed laboratory techniques to tease a vast array of information from scat samples, including the genetic identification of the animal that left the droppings, its diet, reproductive status, stress levels and more.

Conservation Canines founder, biologist Sam Wasser, has compared the dogs’ ability to detect a specific scent to being able to taste a teaspoon of sugar dissolved in a million gallons of water. For human field workers searching chiefly by sight, locating relatively small and inconspicuously colored scat is difficult and slow. But for dogs, scat hunting is an exuberant game. And like all good games, there’s a prize for the winner.

Up ahead, Jack’s movements become even livelier. His handler, Collette Yee, watches his path carefully. “When he zigzags like that, I know he’s on a sample,” she says. Suddenly Jack sits and waits for Yee to catch up.

Sure enough, he has located a piece of scat—this one, as tests later confirm, from a gray wolf. Long absent from northeastern Washington, gray wolves from populations in Idaho and Canada have been filtering back into the region in growing numbers, and wildlife managers want to know how the return of this top predator may be changing the local ecosystem.

From misfits to heroes

To reward Jack for his find, Yee tosses a ball for him to chase while she bags the sample and records location details. Ideal sniffer dogs are high energy and totally crazy about balls: They’ll hunt scat for hours in return for the joy of play breaks. Find a sample, earn some ball time. Sniff, play, repeat.

The CCB mostly recruits its canines from shelters and pet rescue groups. These are dogs that go unadopted, far too rambunctious and ball obsessed to succeed as household pets. But at the CCB, their stamina and focus are treasured assets, and the once-homeless misfits become research heroes. 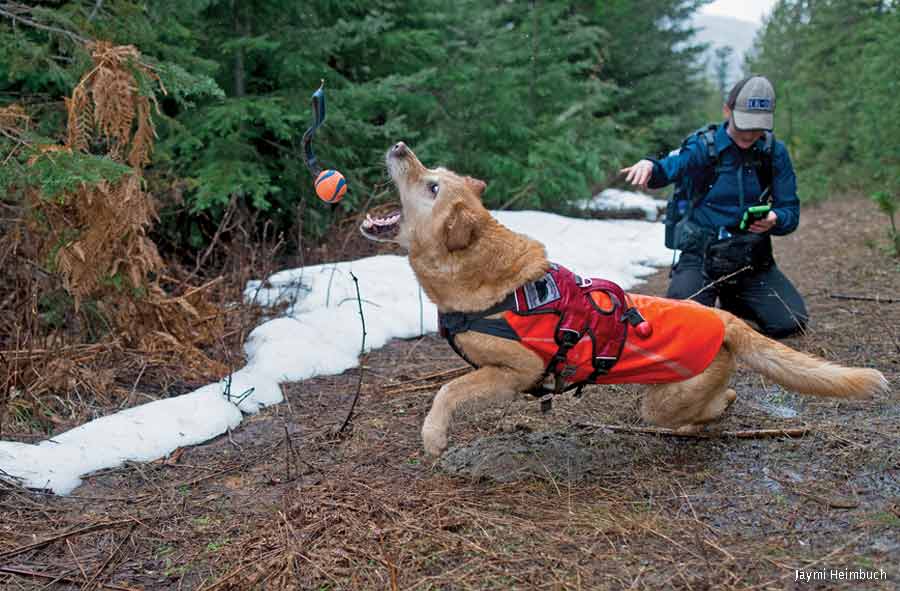 Getting the goods on wolves

Working rugged terrain in northeastern Washington, the dogs need all the energy they can muster. Between March 31 and May 26 of 2017, five dog-handler teams, including Yee and Jack, crisscrossed a 1,776-square-mile study area—twice—locating some 2,680 scat samples from wolves, cougars, bears, coyotes, bobcats, lynx and other animals. They’ve been surveying these mountains since 2015 as part of a collaboration between the University of Washington and the state’s Department of Fish and Wildlife.

Back in the lab, university scientists are turning the thousands of bags of scat into useful information about what’s happening in the woods. “The wolves keep moving in,” says Rebecca Booth, who conducts hormone and DNA analyses, “and we’re not sure what’s going to happen to the whole system.”

The ongoing studies will tell researchers which predators are flourishing, enjoying full bellies and successful mating seasons, and which are struggling. Scat distributions will show if wolves are pushing coyotes out of established ranges, for example, while samples from mountain lions, bobcats and lynx can measure how much of their accustomed prey these animals may be losing to their new wolf competitors.

Scats found by dog teams are revealing wolf behavior patterns that involve people, too. “We’ve found fresh wolf scats in the midst of a lot of activity, whether that’s next to a tent in a busy campground or a couple of hundred yards from a corral where cattle are loaded and unloaded,” says veteran Conservation Canines handler Julianne Ubigau. “We’re a lot closer to these predators than we realize.” Knowing what wolves are up to is critical to developing management strategies that work for both people and wildlife—and these scent-savvy dogs are helping lead the way to coexistence.

Noses up for any challenge 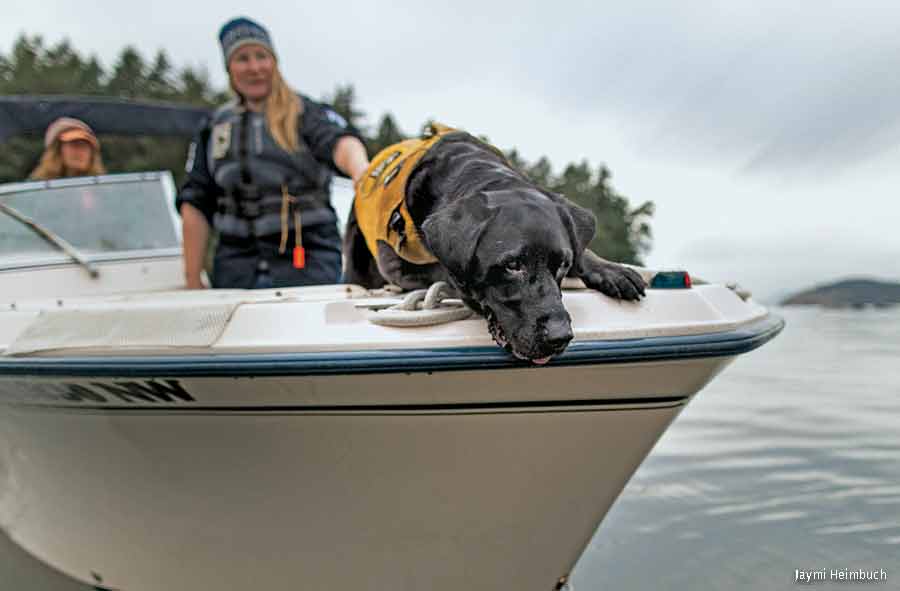 Intently focused on the water below, Tucker can smell floating orca scat from half a mile away.

If you’ve ever watched your pet pooch happily roll in a pile of something putrid, the idea that a dog would race through the woods after a stinky smell may seem like a no-brainer. But the work of the sniffers in the 20-year-old Conservation Canines program at the University of Washington doesn’t stop with the obvious: They search for the tiniest targets, support international wildlife protection and even go to sea to sniff for whales.

The dogs can lead researchers to scats so small that people can barely find them at all. Highly endangered Pacific pocket mice, for example, weigh only about a quarter of an ounce, and the droppings they leave in their few remaining Southern California coastal meadow habitats are barely the size of rice grains. But dog teams have found evidence of the tiny mice in previously undocumented areas, giving land managers data to support mouse-friendly decisions.

Scats from caterpillars of the endangered silverspot butterfly are even smaller—about the size of poppy seeds. On Oregon’s Mount Hebo, where the butterflies can still find the rare, early blue violets they depend on to shelter their eggs, sniffer dogs have found the caterpillars’ tiny droppings, confirming that local conservation efforts are helping this native butterfly survive in the wild.

Perhaps the most surprising task the dogs have mastered is finding scats of killer whales floating on the wind-whipped waters of Puget Sound. Though endangered orcas have been federally protected since 2005, the Vancouver-area resident population has continued to decline, and researchers want to know why. But collecting tissue samples from big marine mammals is challenging, and scientists don’t risk repeating biopsies on the same animal. Led by the noses of their dogs, University of Washington researchers collected 348 scats from 79 orcas during a seven-year period, allowing them to track the health of individual whales over time—a true sea change in our ability to understand the lives of these iconic animals.