Blues in the Bay

Though thriving today, blue crabs in the Chesapeake Bay face a complex future as the climate continues to shift. 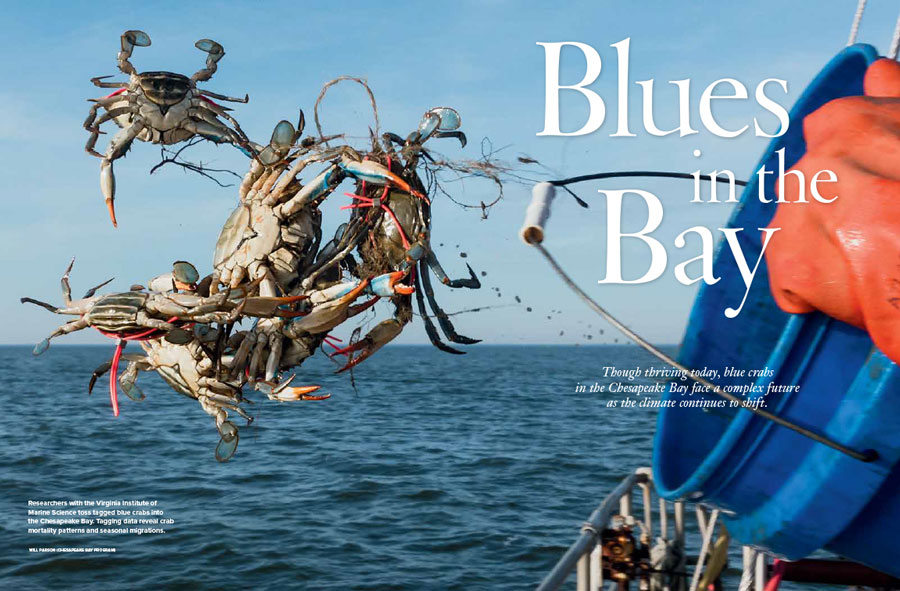 BACKING UP WARILY, bright red claws at the ready, the blue crab resembles a fighter—so picking her up requires a bit of technique (or a pair of thick gloves). Once she’s in your hands, look into her beady eyes. You might perceive a nervous glimmer, a hint that, while she is strong, threats to her home in the Chesapeake Bay—from pollution to warming ocean temperatures to rising sea levels—may make it harder for her to survive.

In this ongoing fight for survival, this year she came out on top. Results of the bay’s annual winter dredge survey, released in March, found that the total blue crab population jumped to 594 million crabs—60 percent above last year’s count and the highest level in seven years. Juvenile crab numbers nearly doubled, and spawning-age females rose by 29 percent, good news for watermen and crab lovers alike.

During the past year, mild winter temperatures helped boost survival rates among juvenile and adult crabs overwintering in the mud, and favorable currents pushed large numbers of larval crabs up the bay from their birthplace at the mouth of the Chesapeake. But currents and temperatures are notoriously fickle, often putting crabs on the ropes. During the winter of 2017 to 2018, for instance, a cold snap knocked out a third of overwintering adult crabs. And though the bay’s crabs are booming today, new research is showing that climate change and a host of other challenges will keep these fighters on their toes—with some factors giving a boost and others a lethal blow. 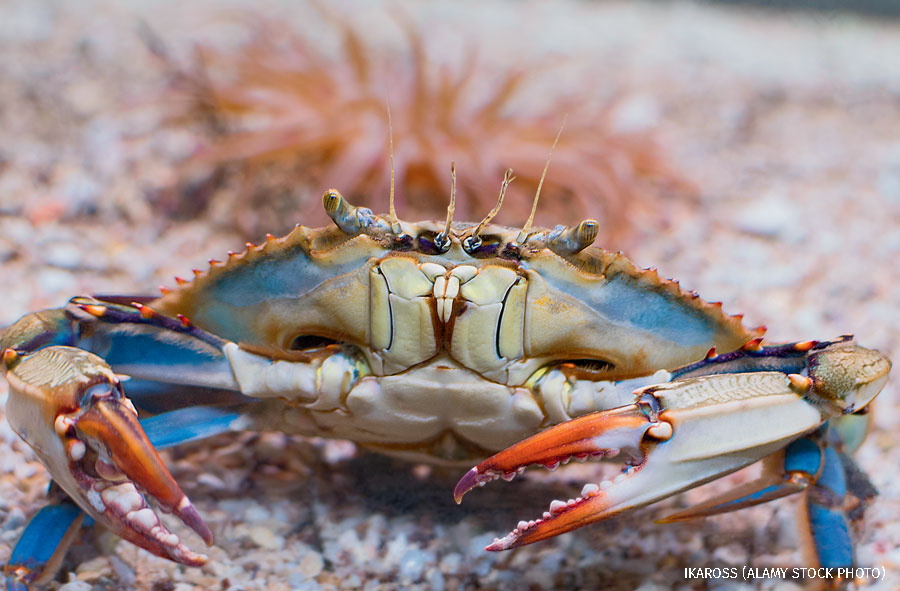 Icon of the Chesapeake Bay, blue crabs (above) from the bay comprise more than a third of the U.S. harvest each year. Valued at more than $70 million in 2017, they fuel a local economy and way of life for watermen (below), who must honor harvest restrictions.

Crabs as a top contender 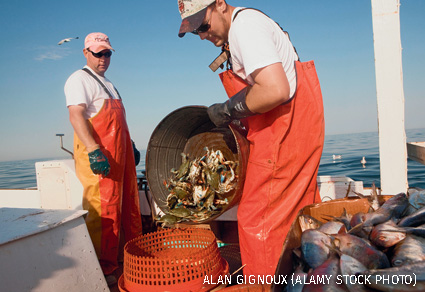 The Chesapeake Bay is one of the nation’s most well-studied bodies of water—and the blue crab is a keystone species and indicator of bay health. An able predator, it scavenges almost anything, including fish, oysters, snails and even other crabs. It also serves as prey. Striped bass, red drum and herons all dine on mature crabs; juveniles and larvae are most susceptible to a wide range of predators. The crab’s ability to generate a thick shell, or carapace, helps it survive, so it’s a mad rush to reach maturity as the animals grow and molt out of smaller shells. But they face many hurdles along the way.

Chesapeake crabs lead a nomadic lifestyle. Between May and October, a female crab releases her eggs—as many as 3 million—at the mouth of the bay, where the larvae float in ocean currents, molting as they grow. After about a month, they migrate inshore, where they mature and then mate in the seclusion of bay grasses. Crabs reach maturity in 12 to 18 months, depending on food and temperature. Once water temperature drops into the mid-50s, the crabs head to deeper waters to spend the winter buried in the mud, where their metabolic rate slows and they try to ride out the cold. 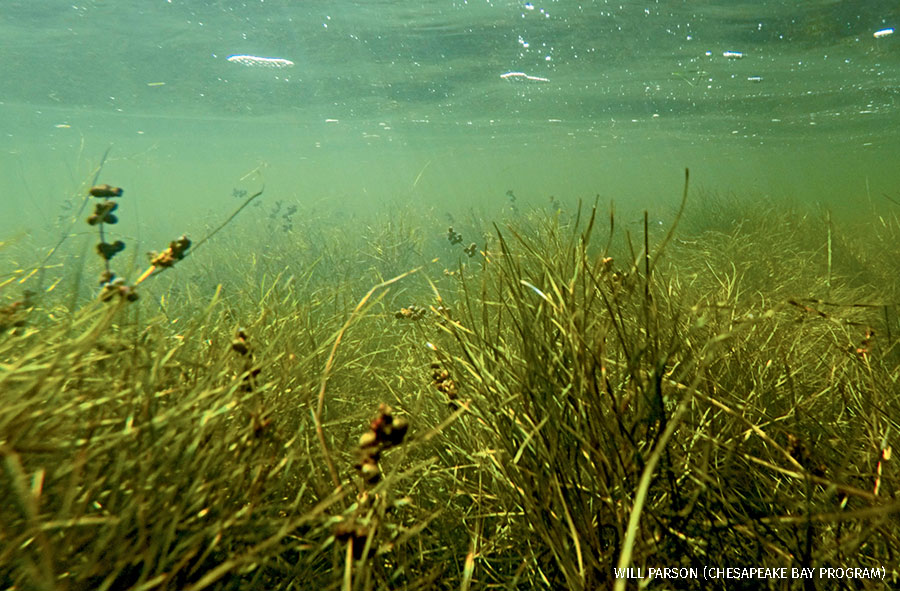 Sago pondweed is one of many grasses in the Chesapeake Bay that provide vital habitat for juvenile blue crabs and other species, add oxygen to the water and trap sediments and pollutants.

Even if crabs survive nature, they still have to contend with humans. More than 18 million people live in the six states and the District of Columbia that drain into the Chesapeake Bay watershed. During the past century, agricultural nutrients and polluted urban runoff have tainted water quality and degraded thousands of acres of bay grasses, which provide critical hiding and foraging grounds for blue crabs.

Likewise, invasive species pose a serious threat. Introduced in the 1970s from elsewhere in the states, the blue catfish is now invasive in the bay, where it devours blue crabs, something Billy Rice, a third-generation waterman, has witnessed firsthand. “An extreme concern for me is the predation on crabs from the blue catfish,” says this Maryland native. “We just don’t seem to be able to get a handle on that fish.”

Conservation efforts in recent years have significantly cut the amount of nutrients and other pollutants entering the Chesapeake Bay, a boon to bay grasses and blue crabs alike. In 2018, a study in the Proceedings of the National Academy of Sciences reported that reductions in nutrient loads in the bay have increased submerged aquatic grasses by 17,000 hectares, the highest grass cover in almost half a century.

Though this news is encouraging, climate change threatens such progress as warmer waters, sea level rise and extreme storms slam the bay. According to the U.S. Geological Survey, bay-area air temperatures rose nearly 2 degrees F, and stream waters warmed by 2.5 degrees F between 1960 and 2014, while the water level has risen about a foot during the past century. Warmer waters hold less dissolved oxygen, creating dead zones that stress or kill aquatic life. And as carbon dioxide increases in the air, it is also absorbed by the bay, where it chemically reacts with the water and lowers the pH level, thereby raising acidity.

Lower oxygen and higher acidity have been shown to reduce crab larvae survival by 87 percent, according to researchers at Stony Brook University. Yet new research is suggesting that blue crabs may actually emerge as climate change winners, showing resilience to warmer water and more acidic conditions—evidence that these fighters may be as adaptable as they are pugnacious. 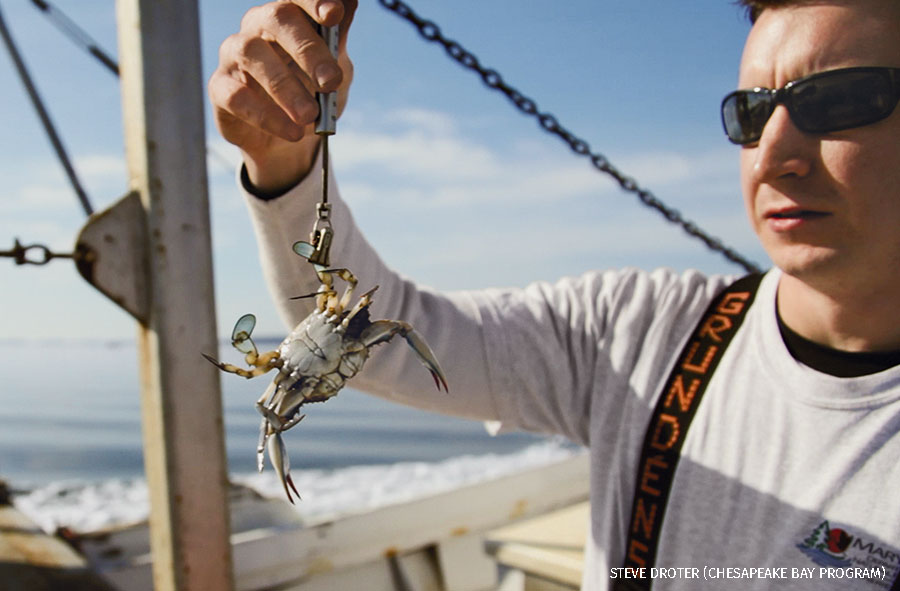 Maryland Department of Natural Resources biologist Joe Williams weighs a male blue crab during a winter dredge survey. The 2019 survey showed a 60 percent increase in crabs over the prior year.

Down but not out

Hillary Glandon, a marine biologist at the Chesapeake Biological Laboratory (part of the University of Maryland Center for Environmental Science) in Solomons, Maryland, recently conducted experiments on thumb-sized juvenile blue crabs scooped from the Chesapeake Bay and placed in glass tanks. Crabs are most vulnerable to predation and water conditions when they are molting and building new shells, so Glandon was studying juveniles “because they’re known as a bottleneck in the population in terms of survival,” and because they molt multiple times while in captivity. To mimic conditions predicted for the bay in 2100, she increased the average water temperature to 90 degrees F and added 10 times the amount of carbon dioxide typically found in the bay today, thereby raising acidity. She then monitored how much the crabs ate, how fast they molted and how thick their shells grew.

When subjected to warmer water only, juvenile blue crabs ate more food and subsequently grew faster. But because the crabs were molting more frequently, the thickness of their shells decreased, which could make them somewhat more vulnerable to predators. When Glandon looked at the combination of warmer water and higher acidity, however, she found that crabs maintained their shells’ thickness. She thinks this may be because crabs (unlike oysters and other bivalves) are able to regulate their internal chemistry. “These results show how future climatic conditions could produce competing pressures on crabs,” says Glandon, “with warmer water encouraging faster growth and causing thinner shells, but more acidic water supporting shell growth.” 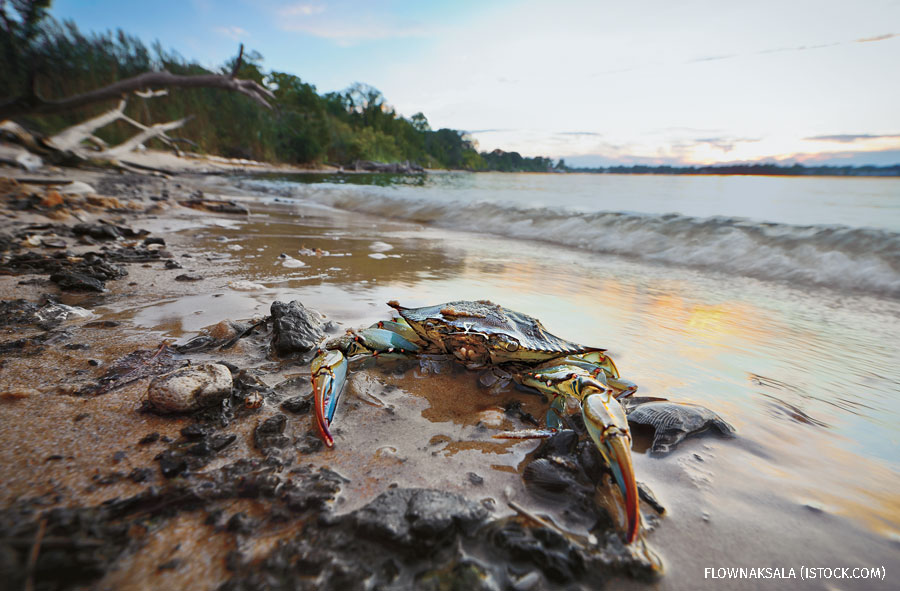 Graced with the name Callinectes sapidus, or “beautiful, savory swimmer,” a blue crab visits a Chesapeake shore. Research suggests the crabs may be adapting to warming waters, which could sustain them in the years ahead.

In the future, if crabs grow bigger, faster, they could step into the climate fight with a better chance than other species of surviving, but survival rides a complex tide of factors. Currently, crabs spend three to five months overwintering—a time when they’re vulnerable to cold snaps and strong shifts in salinity—and survive about 70 to 80 percent of the time. By 2100, Glandon forecasts that crabs will spend as little as one month hunkering down in the mud, and survival will be closer to 100 percent. That may be bad news for crab prey, which get a break while crabs overwinter. Tom Miller, director of the Chesapeake Biological Laboratory, ponders these predator-prey interactions in the context of crabs growing bigger, faster while oysters struggle to grow thick shells in acidic waters, making them more vulnerable to predation. “I think you can expect to see shifts in the diet of crabs as a direct result of acidification and changes in the balance of the predator-prey arms race,” says Miller.

Controlled experiments like Glandon’s may help clarify relationships such as between warming and crab growth, but don’t always address real-world interactions. “If you take one thing in isolation, such as the effect of warming water on blue crab survival, it may look encouraging and impressive on a graph,” says Bruce Stein, chief scientist for the National Wildlife Federation. “But if you look at how the entire system operates, you may find the story is way more complicated.”

Ultimately, adaptive management of the blue crab harvest has helped crabs weather population ebbs and flows. The Chesapeake Bay Watershed Agreement, signed in 2014, set a goal of 215 million adult females for a sustainable population, and the annual winter dredge survey determines catch limits, size restrictions and length of the harvest season. Miller suggests that, one day, a year-round fishery may be feasible, “but that’s a socioeconomic and political question, not just a scientific question.” That’s true for people like Rice who make their living on the water. “Nothing has hurt me as bad as an empty crab pot,” he says.

As Chesapeake Bay waters become warmer and more acidic, crabs may very well adapt. But while the blue crab may come out a winner, the overall health of the bay may not—so the stakes in this fight are high.

Learn more about how NWF is working to save the Chesapeake Bay at nwf.org/Our-Work/Waters.