Slowly rebounding from near extinction, this bird’s survival depends on a healthy Gulf. 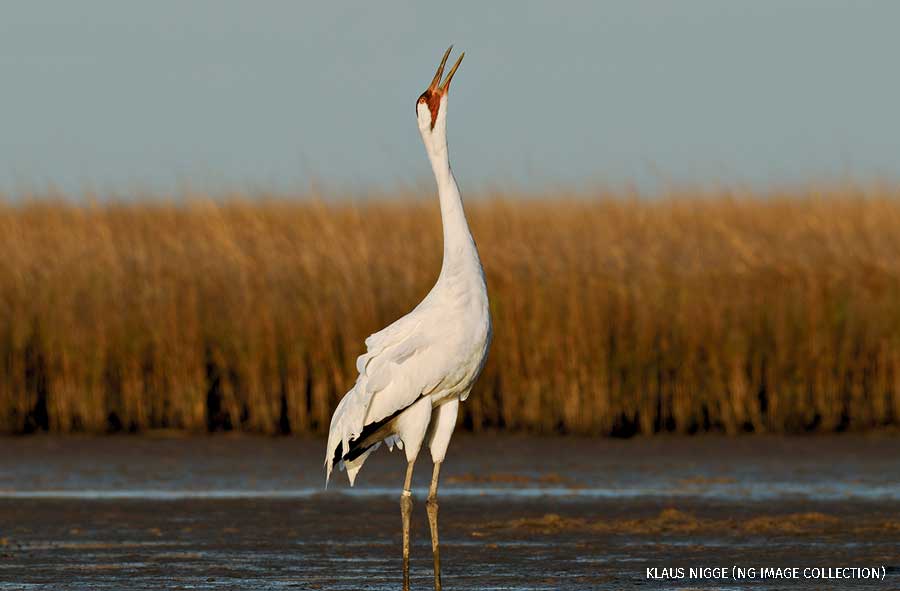 A whooping crane stretches skyward in the Aransas National Wildlife Refuge in Texas, a vital refuge for at-risk birds.

RESILIENT WHOOPING CRANES have been slowly rebounding from near extinction during the past century, but their survival still depends on a delicate coastal ecosystem.

Egg harvesting and hunting for crane feathers to adorn women’s hats almost obliterated the species. The Migratory Bird Treaty Act of 1918 launched some protections. And in 1937, the U.S. Fish and Wildlife Service (FWS) created the Aransas National Wildlife Refuge in Texas, a vital wintering ground for the cranes, which spend their summers about 2,500 miles north in Canada’s Wood Buffalo National Park, established in 1922. “Protecting both ends of their range pretty early was a big part of recovering the species,” says Wade Harrell, FWS’s whooping crane recovery coordinator. Still, by 1941, only 15 birds remained in the wild in Texas.

Cranes in the Gulf subsist on blue crabs, which thrive in the brackish waters of coastal marshes. But the siphoning off of fresh water for upstream development, as well as droughts and sea-level rise, is altering salinity levels, a threat to the crabs. “If there’s not enough fresh water coming into the marsh and salinity’s not right, you don’t get as many blue crabs,” says Susan Kaderka, executive director of the National Wildlife Federation’s South Central region.

To maintain suitable salinity levels, NWF challenges water permits and advocates with state leaders to ensure enough fresh water from the Guadalupe River reaches San Antonio Bay near the Aransas refuge. Meanwhile, organizations have been working on reintroduction programs to bolster populations of whoopers migrating between Wisconsin and spots in the U.S. Southeast.

About 500 whooping cranes now live in the wild, but the population would need to hit 1,000 for 10 years before authorities would consider changing the bird’s endangered status. “We’ve come a long way, but we’re just at halfway,” says Elizabeth Smith, North America program director of the International Crane Foundation. Clearly, a healthy home on the Gulf Coast is critical to a full comeback for the cranes.

Joshua Rapp Learn wrote about what to do if you find a baby animal in your yard in our April-May 2019 issue.

Our Work: Defending the Migratory Bird Treaty Act »
A Wild Year for the Whooping Crane »
5 Species that Need the Recovering America's Wildlife Act »