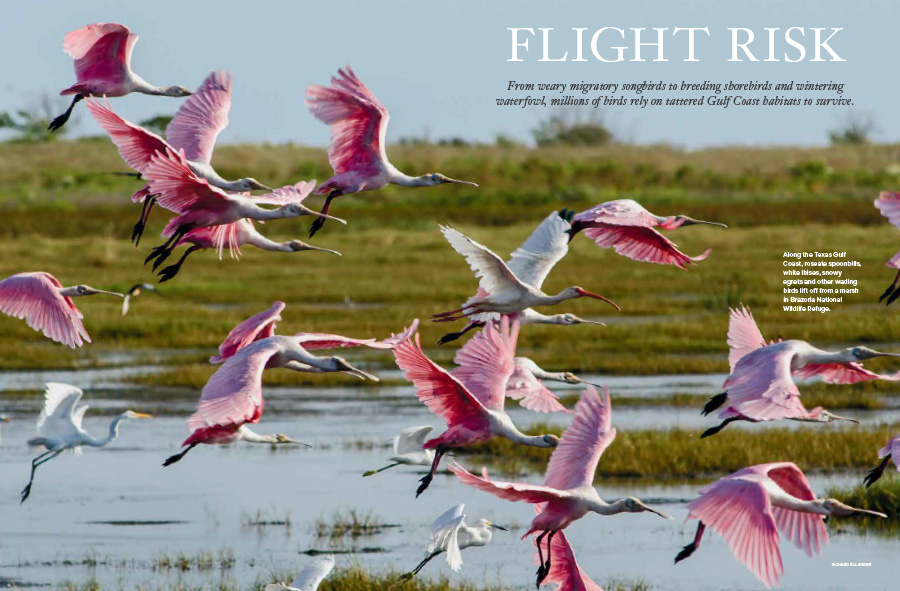 Along the Texas Gulf Coast, roseate spoonbills, white ibises, snowy egrets and other wading birds lift off from a marsh in Brazoria National Wildlife Refuge. (Photo by Richard Rulander)

NOTHING LOOKED PARTICULARLY REMARKABLE about the animal: a robin-sized, mostly gray songbird that sat silently on the branch of a common hackberry. But consider the physical feat this 2-ounce eastern kingbird had just accomplished. After spending winter in a South American rainforest, it had lifted off in early spring, flying northwest along the length of Central America into Mexico’s Yucatán Peninsula. At dusk a day or two later, it launched itself more than a thousand feet into the air and flew some 600 miles north over the Gulf of Mexico—with no food or water—before landing here the following April afternoon on Grand Isle, a tiny barrier island just off the coast of Louisiana.

It was not alone for long. Within minutes, the kingbird was joined by dozens more of its kind until nearly 100 filled the small grove of hackberry and live oak. Then scores more birds—brightly colored tanagers, buntings and orioles—touched down, seeming to fall out of the sky. In fact, “we call this a fallout,” expert birder David Muth told an awestruck companion. Like the kingbird, the new arrivals were oddly quiet. After flying 18 hours or more over open water—possibly through storms or against powerful headwinds—“these birds are exhausted and hungry,” explained Muth, director of the National Wildlife Federation’s Gulf Restoration Program. “All they want to do is rest and eat.”

They’re likely to have plenty of company. “Between mid-April and mid-May, rivers of birds pour northward across the Gulf of Mexico, millions and millions of them heading toward the U.S. coast,” writes ornithologist and Smithsonian National Museum of Natural History Research Associate Bruce Beehler in his book North on the Wing. Last January, scientists for the first time quantified just how many millions make the crossing. Based on observations by citizen scientists and data from coastal weather radar stations—which detect birds and insects as well as clouds and precipitation—the researchers reported in Global Change Biology that an average of 2.1 billion birds pass over the Gulf Coast each spring as they migrate north to breeding grounds throughout the United States and Canada.

Many still have hundreds or thousands more miles to go before reaching these breeding territories. Such long-distance migrants “operate on razor-thin energy budgets,” says Colorado State University ornithologist Kyle Horton, the study’s lead author. Without productive habitat at key stopovers like the Gulf Coast—where they replenish depleted energy reserves, primarily by eating insects—“the birds are less likely to complete their migrations or arrive in time to breed successfully,” he adds. “The ultimate result could be population declines.”

Migrating north from as far as South America to breeding grounds throughout the United States and Canada, millions of birds fly some 600 miles nonstop over the Gulf of Mexico in spring, including eastern kingbirds (below) and (clockwise from top left) painted buntings, scarlet tanagers, prothonotary warblers and Baltimore orioles. Many birds perish during the crossing, especially if they run into storms or strong headwinds. Those that make it desperately need to rest and feed before continuing their journeys—making the woodlands, wetlands and other habitats along the U.S. Gulf Coast critical to these species’ successful breeding and survival

According to a recent, widely publicized report published in Science, many North American bird species already are in steep decline. After analyzing data from decades of weather radar images and on-the-ground bird observations, nearly a dozen prominent ornithologists concluded that the continent is home to 2.9 billion fewer breeding birds today than it was five decades ago—a drop of nearly 30 percent—with even common species such as sparrows and blackbirds in decline.

Lead author Ken Rosenberg, a senior scientist at the American Bird Conservancy and Cornell Lab of Ornithology, says researchers noted some of the greatest losses among neotropical migrants—birds that, like the eastern kingbird, breed in the United States or Canada during spring and summer, then spend winter in Latin America or the Caribbean. “All neotropical migrants combined, 147 species, experienced a net loss of 820 million birds,” Rosenberg says, with those that migrate the farthest—to South America and back—“showing the steepest percentage decline of 40 percent since 1970.” Hard-hit species include the Baltimore oriole (down 49 percent), wood thrush (down 60 percent), chimney swift (down 71 percent) and blackpoll warbler (down 80 percent). 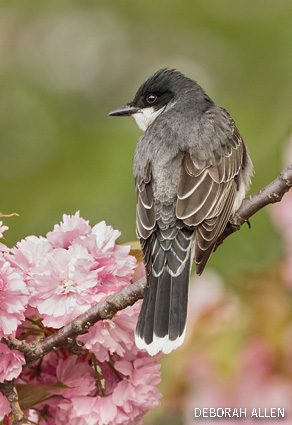 According to Rosenberg, the roots of such losses are manifold, complex and interrelated, ranging from window strikes, light pollution and predation by cats to pesticides, climate change and collisions with communication towers, vehicles and wind turbines. “It’s the classic case of death by a thousand cuts,” he says, but adds that “habitat loss is the biggest overall driver of bird declines.” For migratory species—where up to 85 percent of mortality can occur during migration—strategically located stopovers such as the Gulf Coast count among the birds’ most vital habitats.

Many bird species—including raptors, waterfowl, wading birds, seabirds and shorebirds—also rely on the coast’s woodlands and wetlands for breeding or overwintering. During spring and summer, the region “supports the largest concentration of breeding wading birds in North America,” Muth says. According to ornithologist Peter Marra, a Georgetown University conservation biologist and senior scientist emeritus at the Smithsonian Migratory Bird Center, observers along the coast, particularly in Southeast Texas, regularly tally more bird species than participants anywhere else in the country during the annual Audubon Christmas Bird Count.

The Gulf Coast is especially well known for its abundant waterfowl. As the winter home to more than half of all such birds that travel the Mississippi and Central flyways, coastal Louisiana alone hosts between 2 and 3 million ducks and geese during the cold months. Tom Moorman, chief scientist for Ducks Unlimited, calls this stretch of the U.S. Gulf Coast “the single most important migratory and winter habitat for waterfowl on the continent.”

This crucial bird habitat is in jeopardy, however, with large tracts already destroyed, fragmented and degraded by coastal development, hurricanes and contamination by oil, agricultural chemicals and other pollutants. In Louisiana, one of the most important stretches of coastline for birds, land literally is vanishing into the rising Gulf of Mexico. Since the 1930s, the state has lost some 2,000 square miles of habitat—the highest rate of land loss in the nation—and today an area the size of a football field disappears every 100 minutes. Along with sea-level rise, natural erosion and subsidence have contributed to this loss, but humans have exacerbated it by constructing levees, dams and other structures that prevent the Mississippi River from delivering the sediment and nutrients that historically built and sustained land. Thousands of pipelines and canals, meanwhile, speed up the destruction by allowing vegetation-killing salt water into freshwater wetlands.

These losses no doubt are impacting birds. “When you go from 6,000 to 4,000 square miles of habitat, the number of birds supported declines significantly,” Muth says. For neotropical migrants crossing the Gulf, “it may mean they must fly 10 to 20 miles farther to reach their first refueling stop.” If sea level rises according to some projections, he adds, Grand Isle could disappear in fewer than 50 years.

Black skimmers (above) rest on a Gulf Coast beach, where thousands may gather in spring before dispersing to breeding colonies. A weather radar image (below) shows birds (light blue) encountering a front (green) over Louisiana after crossing the Gulf of Mexico.

Compounding the challenges facing birds, declines in the volume of nutrient-rich Mississippi River water that reaches the coast means habitats that remain are far less productive than they once were. “Essentially, we have been starving these coastal wetlands for more than a century,” Muth says. 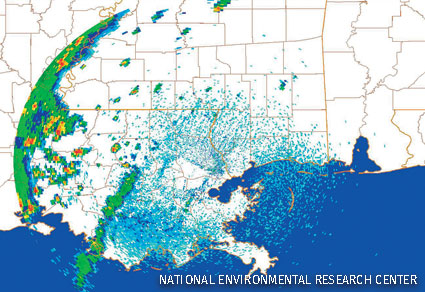 Recently, he has been feeling more optimistic, however. Although the 2010 Gulf oil spill killed hundreds of thousands of coastal water birds, a $16.5 billion damage settlement fund resulting from the spill is subsidizing projects that will reconnect the Mississippi with habitats along the coast. Restoring this natural process will encourage new—and more-productive—land to grow. “We’ll never replace as many square miles as we’ve lost,” Muth notes, “but the land we gain will be better wildlife habitat.”

That’s good news for millions of birds that rely on this tattered coastline. By slowing habitat loss, along with taking steps such as reducing light pollution and keeping cats indoors, “we can decrease the mortality that has led to bird population declines,” Rosenberg says. “But to reverse those declines,” he adds, “we must restore some of the key habitats that we’ve already lost.

Migratory Birds Going the Distance »
Our Work: Gulf Restoration »
NWF Blog: Five Migrating Birds That May Stop in Your Yard »