Region on the Half Shell

Along the U.S. Gulf Coast, oysters are key to healthy wildlife, thriving local economies and long-term security of the shoreline itself. 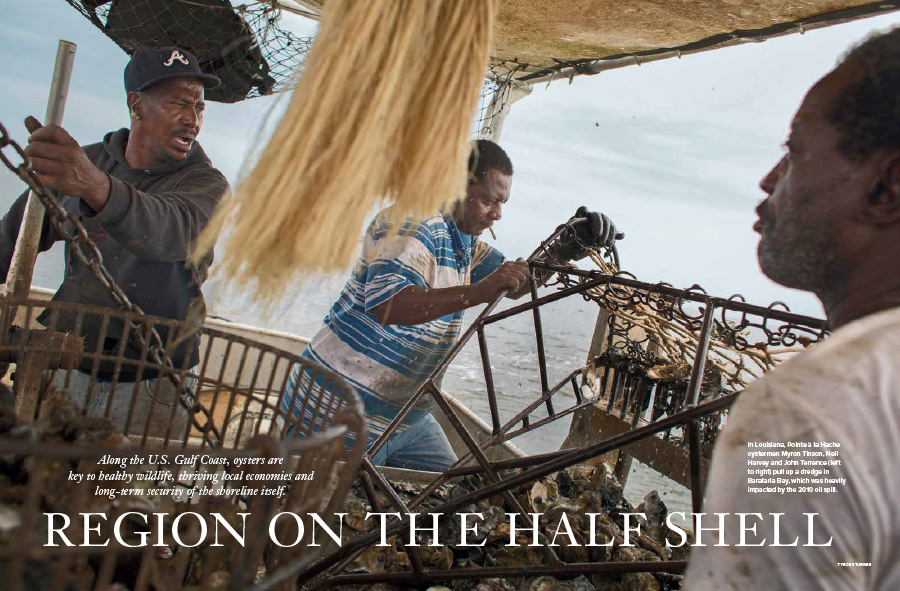 In Louisiana, Pointe à la Hache oystermen Myron Tinson, Neil Harvey and John Terrence (left to right) pull up a dredge in Barataria Bay, which was heavily impacted by the 2010 oil spill. (Photo by Tyrone Turner)

IN THE SPRING OF 2010, 66-year-old fisherman Burnell Sylve prepped his boats for Louisiana’s oyster season. The harvest promised to be bountiful—the first good year since Hurricane Katrina hit the coast five years earlier. But on April 20, 10 days before the season was slated to open, the Deepwater Horizon drilling rig exploded 41 miles off Louisiana’s shoreline, setting in motion the largest marine oil spill in history.

As the wellhead began belching millions of gallons of crude oil into the Gulf of Mexico, federal and state officials closed tens of thousands of square miles of waters to fishing. Some areas did not reopen until mid-2011. Sylve’s boats sat idle for nearly a year, and the region’s oyster harvests plummeted: In 2010, Louisiana took an estimated $21.5 million hit in oyster harvest revenue.

Unlike other marine animals, oysters cannot move away from oil. According to the federally mandated Natural Resource Damage Assessment, completed in 2016, the spill may have led to the death of as many as 8.3 billion oysters—killed directly or indirectly—and took a tremendous toll on shoreline oyster reefs that became matted with crude oil. Cleanup efforts caused even more damage as people and machines trampled the reefs, attempting the nearly impossible task of scrubbing oil from coastal habitats.

In Pointe à la Hache, the little fishing village that’s home to Sylve and his extended family, the spill laid ruin to the local economy. Located on the coast of Plaquemines Parish, a peninsula that juts into the Gulf and parallels the Mississippi River, this once-vibrant African American community soon began to feel like a ghost town. “The BP spill was devastating to us,” says Sylve’s cousin, Byron Encalade, a three-generation Pointe à la Hache oysterman and president of the Louisiana Oystermen Association. “The families that could get out got out,” he says. “They got out of the business, out of this community.”

Backlit by the sun slipping behind a cloud, oystermen tong in Florida’s Apalachicola Bay (above). Long known as “the world’s oyster capital,” this bay on the eastern Gulf of Mexico has seen oyster harvests plummet, threatening both local livelihoods and supplies of the fat, buttery bivalves (below) the Gulf region is famous for.

The oil spill was just the latest assault on the Gulf Coast’s once-vast oyster reefs. A few hundred years ago, this coast was lined by miles and miles of dense reefs that made travel treacherous. “Oyster beds (were) found just about everywhere a river met salt water,” writes Jack E. Davis in his book Gulf: The Making of An American Sea, which refers to the reefs as “serrated shoals” that were miles long and ready to rip apart unsuspecting vessels that sailed across them.

Explorers from the 1600s to the early 1800s described one of these reefs, known as the Great Barrier Reef of the Americas, as a colossal structure off the Louisiana coast nearly 100 miles long and several miles deep that made navigation to the shore possible only with narrow, flat-bottomed canoes called pirogues. Fewer than 60 years ago, Sylve, who began working on his family’s boats at age nine, remembers how, at times, boats caught over a reef at low tide would become grounded in the Gulf of Mexico. “They’d sometimes just have to stay there until morning,” he recalls.

But today as much as 85 percent of oyster reefs worldwide are gone. “The huge natural reefs disappeared because of people who used oyster shells to make mortar and roadbeds, even to supplement chicken feed,” says David Muth, director of the National Wildlife Federation’s Gulf Restoration Program. “Meanwhile, upstream, we diverted fresh water and built levees that no longer allowed fresh water to follow traditional routes to the ocean and its oyster beds. Along the coast,” he adds, “we dredged channels and built jetties that also redirected fresh water, so the reefs died because the salinities weren’t right. Once the reefs were dead, they just eroded away or were carted away by people.”

These losses have continued in recent years. Long known as “the world’s oyster capital,” Florida’s Apalachicola Bay in the eastern Gulf, for example, has faced declining oyster harvests for the past decade because the U.S. Army Corps of Engineers allows too much fresh water to be diverted upstream for drinking and irrigation in Georgia. In 2013, when the effects of those diversions were worsened by record-low river levels, the bay’s salinity spiked, and its oyster population completely collapsed. “In Apalachicola, as in other places along the Gulf, the main problem for oysters is that fresh water and salt water are not mixing naturally,” says Melissa Samet, NWF’s senior counsel for water resources. “If we’re going to have oysters in the years to come, we have to get the balance back.”

Oyster reefs benefit people beyond those who harvest and eat the animals. Hugging the shorelines of Alabama, Mississippi, Louisiana, Texas and Florida—in brackish bays, bayous, marshes and estuaries where flows of fresh water moderate the salinity of sea water—reefs provide important ecosystem services. They filter impurities from water, create habitat for other wildlife and protect coastal communities from hurricanes and other storms by acting as breakwaters. The latter benefit is particularly important today as Louisiana faces the two-pronged threat of rising seas and sinking land, or subsidence. Often called living shorelines, “reefs are self-sustaining,” Muth explains. “They keep growing upward, even as the land sinks and sea levels rise.”

Because a single oyster can filter up to 50 gallons of water a day, oyster reefs also help keep estuaries and other waters clear enough to allow the growth of vegetation such as seagrass, which is important for wildlife. They teem with their own animal life as well. Seth Blitch, coastal and marine-conservation director for The Nature Conservancy (TNC)—an NWF partner in the Restore the Mississippi River Delta coalition—considers oyster reefs “the coral reefs of the Gulf.” Fishermen’s boats can often be found working above reefs, he says, because a variety of shrimp, crab and fish species, including croaker and speckled trout, flourish there. “Oysters are unique among fisheries because they’re also habitat,” Blitch says.

Recently, prospects for the Gulf region’s oysters have improved, thanks largely to damage-settlement funds resulting from the oil spill that devastated so many of the reefs a decade ago. These oil-spill recovery and restoration funds, which total more than $16 billion, provide a “once-in-a-lifetime opportunity” to reverse the decline of oysters in the Gulf, says Bob Bendick, director of TNC’s Gulf of Mexico Program.

Working with TNC and other coalition partners, the Federation has supported several priority oyster reef restoration projects using oil-spill settlement funds. These efforts require collaboration among a broad range of stakeholders, from scientists, environmental organizations and government agencies to volunteers, oyster fishermen and even oyster bars in New Orleans, which are donating their used shells. The recycled shells are important to reef-restoration efforts because free-swimming oyster larvae require hard substrates—such as rocks, wooden piers, concrete or other oysters—in order to settle and grow. Since it launched its recycling program in 2014, the Coalition to Restore Coastal Louisiana (CRCL) has picked up nearly 9 million pounds of oyster shells from the city’s restaurants. 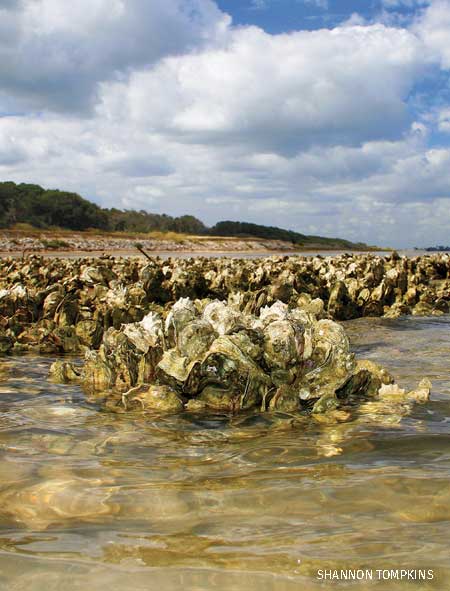 To restore an oyster reef along the shoreline of Louisiana’s Grand Isle, recycled shells are suspended in cages (below) to attract the animals’ free-swimming larvae—which require hard substrates to settle and grow. Mature reefs, such as this one in Texas (above), are known as living shorelines because they act as breakwaters that can protect the coast from storm surges.

Oyster reefs on the rise

Several new oyster reefs already have been completed by Federation partners. They include the 1-mile-long Calcasieu Lake Reef built in Louisiana in 2017 by TNC, a half-mile-long reef in the state’s Biloxi Marsh built in 2016 by CRCL and a 400-foot-long reef built in 2019 by CRCL. The latter protects a Native American tribal mound outside of Louisiana’s Pointe-aux-Chenes. Many more projects are in the works.

While none of these new reefs are intended to be harvested, they have been constructed strategically near public seed grounds and other cultivated beds so that fishermen will eventually benefit from oyster larvae traveling from the reefs. “We want a healthy ecosystem first,” Muth explains. “If we have a healthy ecosystem, then a commercial harvest can thrive.”

Katy Reckdahl is a writer based in New Orleans, Louisiana.