An innovative reintroduction effort to save endangered red wolves 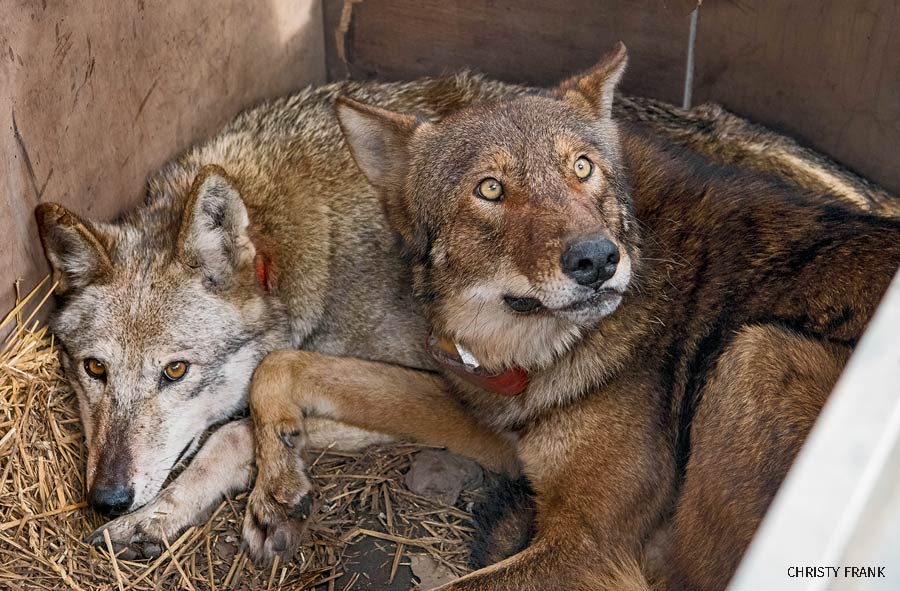 A male red wolf from Florida lies in a den box with his new mate before their release to a wildlife refuge in North Carolina.

LAST FEBRUARY, AS THE SUN SANK behind overcast skies at North Carolina’s Alligator River National Wildlife Refuge, Joe Madison held his breath in anticipation. If all went according to his plan, the U.S. Fish and Wildlife Service (FWS) wildlife biologist would soon witness an adult red wolf released to the wild in the state for the first time since 2009—adding vital new blood to the 20 animals that make up the species’ only wild population.

The wolf, a male dubbed 2282, had recently been transported 700 miles north from St. Vincent National Wildlife Refuge, a red wolf propagation site on an island off Florida. After arriving at the Carolina refuge, he was placed in a 3,000-square-foot acclimation pen with a resident wild female in the hope that the two would form a pair. Biologists also had captured the female’s daughter to release at the same time as the older animals.

Under cover of dusk on the release date, Madison and his team slowly peeled back the pen’s fencing while the wolves stayed inside their den with the door closed—a “soft release” designed to minimize stress. After most of the team retreated, a single technician carefully opened the den’s door, and the wolves inside were free.

“He’s out of the box,” Madison whispered as 2282 peeked around the den’s corner, then exited and walked slowly across a field of yellow flowers. Moments later, his companion’s daughter was released and promptly followed. As the two trotted off, the older female darted out and, together, the three wolves headed into tall grass. Breathing a sigh of relief, Madison said, “I don’t think that could have gone any better.”

In Florida, male red wolf 2282 gets a health check before transport to North Carolina.

The most-endangered wolf on Earth, the red wolf was once common throughout the eastern and south-central United States, thriving in nearly any habitat that offered sufficient water, cover and prey. By the 1970s, however, lethal, government-sponsored predator-control programs, along with habitat loss and degradation, had reduced the wolves to a single remnant population in coastal Texas and Louisiana. In a last-ditch effort to save the species from extinction, FWS biologists took every pure-blooded red wolf into captivity (just 17 animals), and in 1980, the species was declared extinct in the wild.

What followed was a Herculean effort by federal, state and nonprofit organizations to breed the wolves at zoos and other facilities across the country, with the goal of eventually releasing some of their pups to the wild. The first release took place in 1987, when four captive-born pairs were introduced to the Alligator River refuge. Later releases took place at several other sites across the eastern part of the state.

These reintroductions were something of a gamble. “Nothing like this had ever been done before with a large carnivore species,” says wolf biologist Regina Mossotti, vice coordinator of the Association of Zoos and Aquariums’ Red Wolf Species Survival Plan. Yet the experiment worked—spectacularly. “For decades after the reintroductions, red wolves flourished,” Mossotti says, with the state’s wolf population eventually reaching 150 individuals. 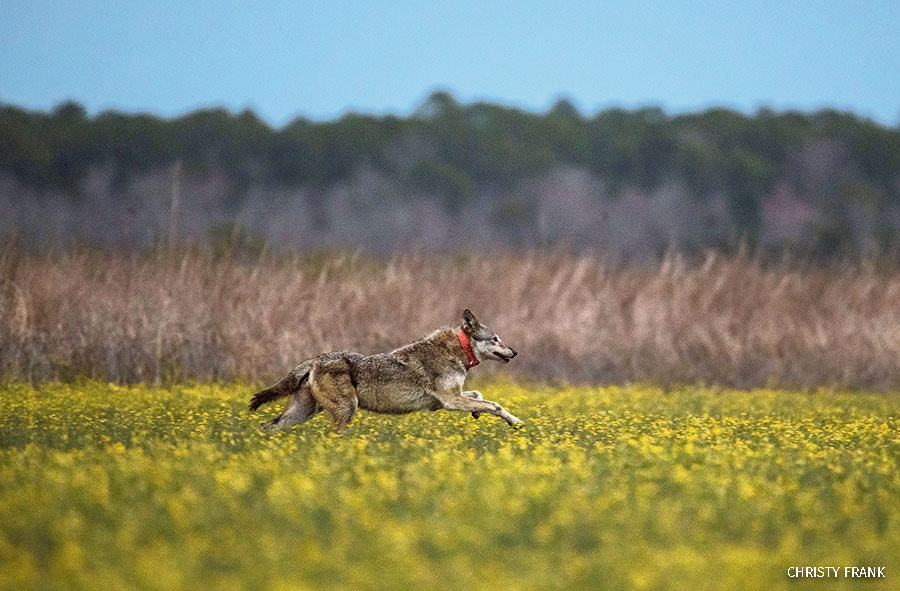 After wolf 2282's release, a wild female sprints across a field to join him.

But in the late 2000s, the red wolf’s fortunes began to change for the worse. A lapse in reintroductions and death at the hands of humans—via vehicle strikes and, especially, gunshots—drove wolf numbers down to fewer than two dozen animals today.

Many wolves that are shot are mistaken for their much-maligned canid cousin, the coyote. Not native to the East, these smaller, more-adaptable predators have steadily expanded their range beyond the West, thanks to habitat changes and the extermination of wolves, both red and gray, across much of the country. Coyotes also compete with red wolves for prey and dilute the species’ genes when the rare wolves, unable to locate mates of their own kind, resort to breeding with their close relatives.

In tandem with the species’ declining population, the number of red wolf pups born in the wild fell until, in 2019—for the first time in more than three decades—no wild pups at all were born. That’s one reason the fate of 2282 is critical, says Madison. When this issue went to press, six months after the wolves’ release, he reports that all three animals “remain alive and well on the landscape.”

“This is our best chance at having red wolf pups in the wild,” Madison adds—and the biologists’ best chance of preventing a second extinction of the wild Canis rufus.