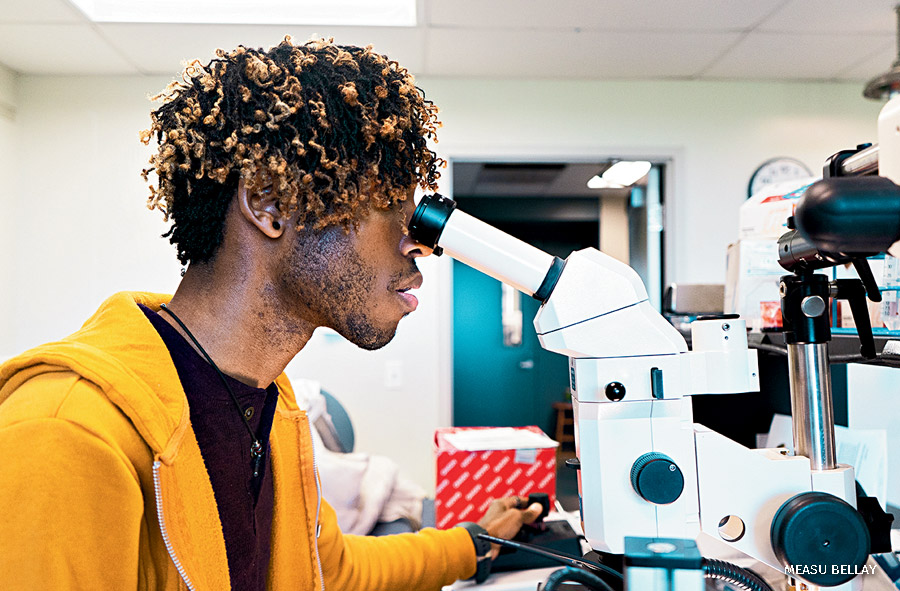 Whether working in the USDA’s Bee Research Lab in Maryland (above), examining plants growing wild near his Washington, D.C., home or checking research hives for brood—the next generation of bees—at Burapha University in Thailand, Ramsey focuses on finding ways science can support healthier coexistence between humans and his beloved bugs.

SAMUEL RAMSEY IS ON A JOURNEY that began when he was a little kid with a paralyzing fear of bugs. “I didn’t even want to go outside to play, I was so terrified,” he recalls. “I had nightmares. It was a full-on phobia.” In response, his parents taught him a powerful principle: You fear what you do not understand. And they got him a library card.

As he pored over every insect book he could find, fear turned to fascination. Near the end of that transformative summer, the newly bold 7-year-old announced to his mother: “Bugs are cool. I’m going to be an entomologist when I grow up.”

Twenty-five-odd years later, Ramsey is a newly appointed entomology professor at the University of Colorado–Boulder, where he’ll continue his award-winning work on honey bees and the threats they face.

He’ll also continue his charismatic efforts to share knowledge with anyone who’s even a little bee curious. A popular speaker at live events, on podcasts and in online videos, he cheerfully introduces himself as “Dr. Sammy, your friendly neighborhood entomologist.” Microphones and microscopes are both crucial to his mission: “The ability to reach people is as important as the ability to reach conclusions in the lab,” he says.

“When I was choosing a subject for my doctoral research,” says Ramsey, “I wanted to do something that could make a difference.” That something centered on honey bees.

The European honey bee, Apis mellifera, was transported to North America by colonial settlers in the early 17th century and flourished here along with some 4,000 native bee species. But with the overuse of pesticides, the disruption of plant communities that bees depend on for nutrition, human-driven climate change and the global spread of colony-killing parasites, “we’ve set up this perfect storm of stresses for our pollinators,” he says. “Bees need help.” 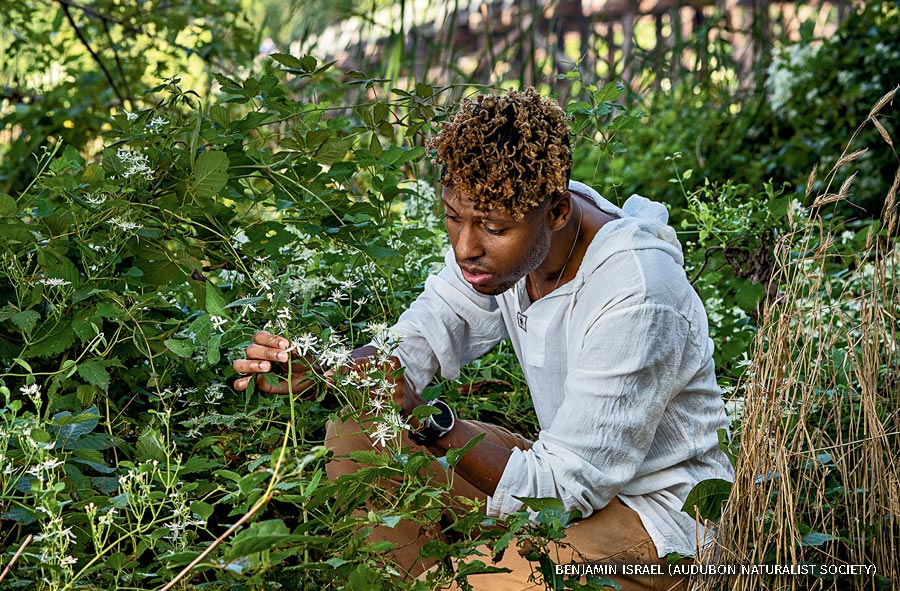 Whether working in the USDA’s Bee Research Lab in Maryland, examining plants growing wild near his Washington, D.C., home (above) or checking research hives for brood—the next generation of bees—at Burapha University in Thailand (below), Ramsey focuses on finding ways science can support healthier coexistence between humans and his beloved bugs.

Ramsey chose to focus on the tiny but devastating parasitic mite Varroa destructor, an invasive species widely regarded as public enemy No. 1 for honey bees and beekeepers—and no friend to the farmers who rely on honey bees to pollinate crops from almonds and citrus fruits to sunflowers and blueberries. Beekeepers in the United States are spending more than $11 million annually to fight bee mites and still losing some 40 percent of their colonies every year. 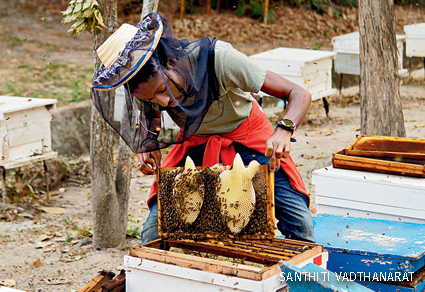 Ramsey wondered if the failure to develop knockout control strategies might be rooted in misunderstanding the parasite’s biology. For nearly 50 years, the standard wisdom was that Varroa feed on bee hemolymph (a fluid in invertebrates akin to blood) just as ticks feed on mammal blood. But that model didn’t explain the cascade of catastrophes that beset a colony teeming with mites or why Varroa only feed from a bee’s abdomen when bloodsuckers can grab a meal pretty much anywhere on a victim’s body. Was Varroa eating something else?

Ramsey used fluorescent stains to mark two different honey bee tissues: the hemolymph and the fat body, an organ in the bee’s abdomen that’s similar to the human liver. Then he let Varroa feed on the stained tissues and followed the glowing trails through their digestive tracts. He found that the mites were eating fat body, with only incidental slurps of hemolymph—a new discovery.

“We’ve been thinking of these parasites as vampires when they’re actually more like werewolves,” Ramsey says. The menu difference matters because the fat body doesn’t just store nutrients. It also breaks down toxins, regulates hormone levels and provides bees’ primary immune response, among other functions. A bee with Varroa-damaged fat body will starve when nectar and pollen are scarce, succumb to a viral infection or die from low-level pesticide exposure—all stresses that a healthy bee can often survive. Ramsey and his colleagues are now investigating whether they can introduce a bee-safe substance into the fat body that will disrupt mite reproduction and save colonies from being overwhelmed.

Ramsey is also working with researchers at Burapha University in Thailand who are studying even more-damaging mites in the genus Tropilaelaps. Originally a parasite on Asian giant honey bees, Tropilaelaps mites have made the jump to infesting colonies of European honey bees as well. They attack the brood—the developing young in a hive—and they’re on the move. Native to Southeast Asia, Tropilaelaps have already spread to China and the Indian subcontinent, and Ramsey says they seem to be following pretty much the same path and timetable that carried Varroa destructor around the world starting in the 1950s. “They’re not here yet,” he says, “but they very much seem to be on their way.”

Determined to save honey bees in North America from another Varroa-style disaster, Ramsey hopes to learn as much as he can now about the basic biology of Tropilaelaps and about how the Asian honey bee species that evolved along with these mites resists the injuries they can cause. “We have to be ready to stop Tropilaelaps before they can become established here,” Ramsey says. “It’s a bad idea to wait until your house is on fire to start organizing your emergency response plan.”

Lynne Warren wrote about weasels in the February–March 2022 issue.

The Truth About Honey Bees »
Being There for Bees »
To Bee or Not to Bee: A Discussion on Honey Bees »