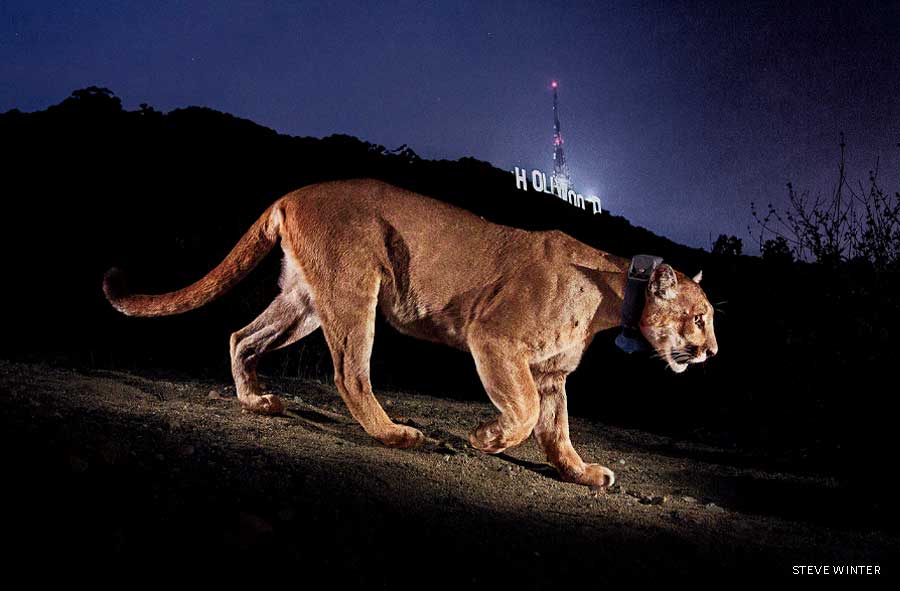 On Earth Day in April 2022, a crowd of people gathered along the 101 Freeway in Agoura Hills, California, to celebrate a momentous event that had been a decade in the making: groundbreaking for the Wallis Annenberg Wildlife Crossing (below, artist’s rendering), which, once complete, will be the largest wildlife crossing in the world. The structure is a response to 20 years of research showing that roads are deadly for animals trying to cross them and have also created habitat islands that genetically isolate wildlife, particularly the Santa Monica Mountains population of mountain lions. 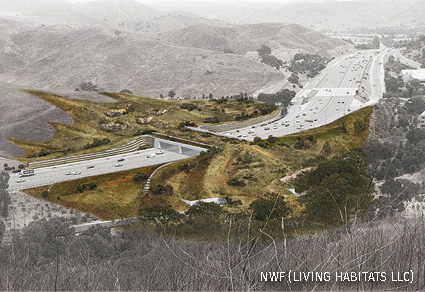 Mountain lions have long been poster children for the effort to build the crossing, with Griffith Park resident cat P-22 (top) being the most famous. Noting increasing signs of inbreeding caused by habitat fragmentation, scientists predict the Santa Monica Mountains lion population could go extinct within 50 years. In addition, at least nine cats have died in collisions with cars in the past year. Conservationists hope the crossing will allow mountain lions and other wildlife safe passage across the freeway as well as reduce inbreeding by connecting habitat and expanding the size of the cats’ mating pool.

For the past decade, the National Wildlife Federation has worked with partners and led the #SaveLACougars campaign to fundraise and increase awareness of the need for the crossing. The campaign has held events such as the annual P-22 Day Festival, hired local artists to paint murals and even hosted a songwriting contest to get the word out. These efforts also connected the local community to the issue and emphasized how even in a very urban area like Los Angeles, people can make a huge difference for wildlife. 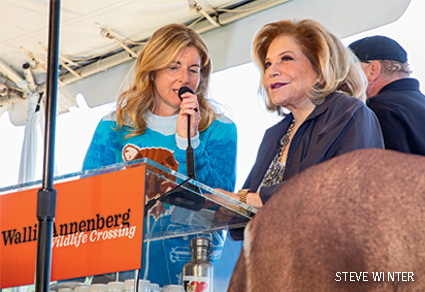 Last April’s ceremony began with a blessing from Chumash and Tataviam Elder Alan Salazar and featured hip-hop artist Warren Dickson performing songs about wildlife. After speeches from a variety of people—including the biologist who discovered P-22, Miguel Ordeñana, actress Julia Butters and philanthropist Wallis Annenberg (pictured right, with Beth Pratt)—the ground was officially broken. Beth Pratt, NWF’s regional executive director for California, joined Annenberg—a major donor to the project—California Governor Gavin Newsom, NWF CEO and President Collin O’Mara, local schoolchildren and others wielding golden shovels (below) to dig up the first scoops of soil. Scheduled for completion in 2025, the construction will be streamed on a live feed.

“You don’t get too many days like this one in life,” Pratt says of the groundbreaking. “These mountain lions are going to have a future because of this work.” 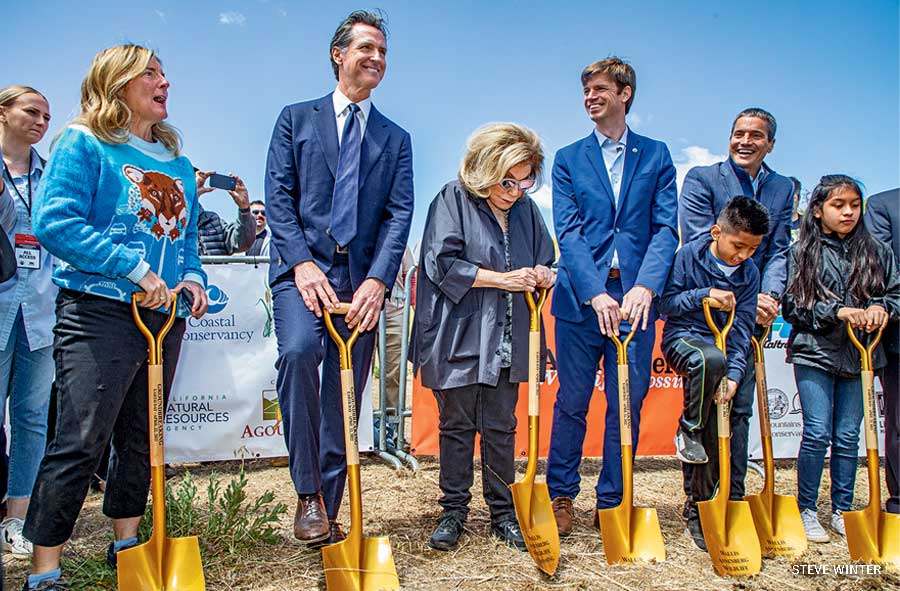 “Together, we have done the near impossible as we break ground on the wildlife crossing.” – Beth Pratt

Update: On December 17, 2022, biologists made the decision to euthanize the mountain lion P-22 due to serious health issues. To learn more about P-22 and his legacy, you can read his eulogy written by Beth Pratt here.

Why donor Jim Jenkins cares about conservation “When I was a kid visiting the Adirondacks, you could never see any moose. Now, there’s a resurgence of the population, which is really exciting. I get a charge when I see a moose. There’s so much bad news on the environmental front, so to see on the ground that the trend can be positive makes you feel less hopeless.” 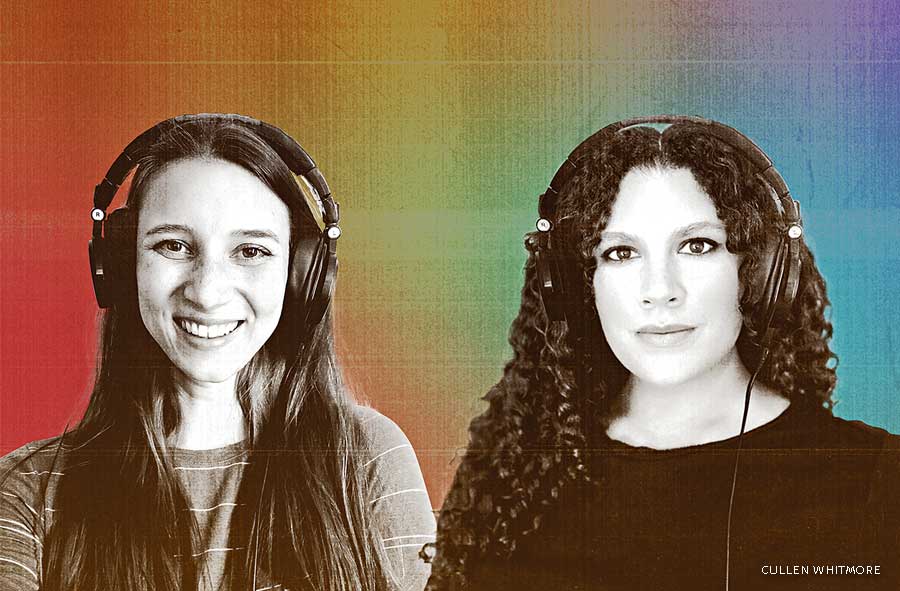 Within a day of meeting for the first time in September 2021, Kaila Drayton (above right) and Nicole Litwiller (above left) knew they wanted to do a podcast together. Litwiller had just started as an Equity and Justice Storytelling Fellow at the Federation, and Drayton—NWF’s vice president of operations—wanted to get to know her. When they met, they discussed how Litwiller could tell the story of the Federation’s equity and justice journey—and the podcast “Seeds of Culture Change” was born.

“One of the first things we agreed on was that we weren’t going to paint a rosy picture of NWF, particularly around equity and justice,” says Drayton. “I don’t just want to hear about the wins. I want to know about what didn’t work and how to handle that.”

Historically, the conservation movement has tended to be insular and exclusionary, serving the interests of white, male conservationists and not allowing space for diverse perspectives. While in recent years there have been efforts to shift the conversation to become more equitable, those efforts haven’t been without missteps. “Seeds of Culture Change” recognizes this dynamic—as well as NWF’s participation in that traditional culture—and doesn’t shy away from such uncomfortable topics.

Throughout the 10-episode series, the podcast explores obstacles to the success of NWF’s equity and justice work, including an unwillingness by the “old guard” to change its ways and the burden of equity work being placed on employees from marginalized groups. While these issues can be difficult to talk about, discussing them is an integral part of working through them and coming to a place of better understanding.

“We talk about accountability, healing and repair, and our conversations are very candid,” says Drayton. “We can’t pretend like it never happened. You have to reconcile with the past in order to move forward.”

In the series, Drayton and Litwiller interview NWF employees who have witnessed firsthand problems within the organization and the growth that has taken place. These interviews, from longtime and new employees, give context and history. Just a few years ago, for example, NWF’s equity and justice work was done on a volunteer basis, with employees taking on the burden of additional work outside their normal roles. Now, NWF’s Equity and Justice team—led by Chanté Coleman—has six full-time employees and a dedicated budget. Ensuring that this work is properly resourced is an important step toward making equity and justice a seamless part of organizational culture.

In the final episode, Drayton, Litwiller and their guests reflect on what they’ve learned and on the future of the organization. “’What does your dream NWF look like?’ That’s what we used as a starting point,” says Litwiller. “You can’t create a future that you haven’t already imagined.”

You can find “Seeds of Culture Change” wherever you get podcasts or at natwild.life/seeds-of-change. 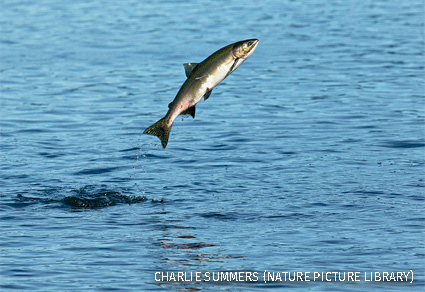