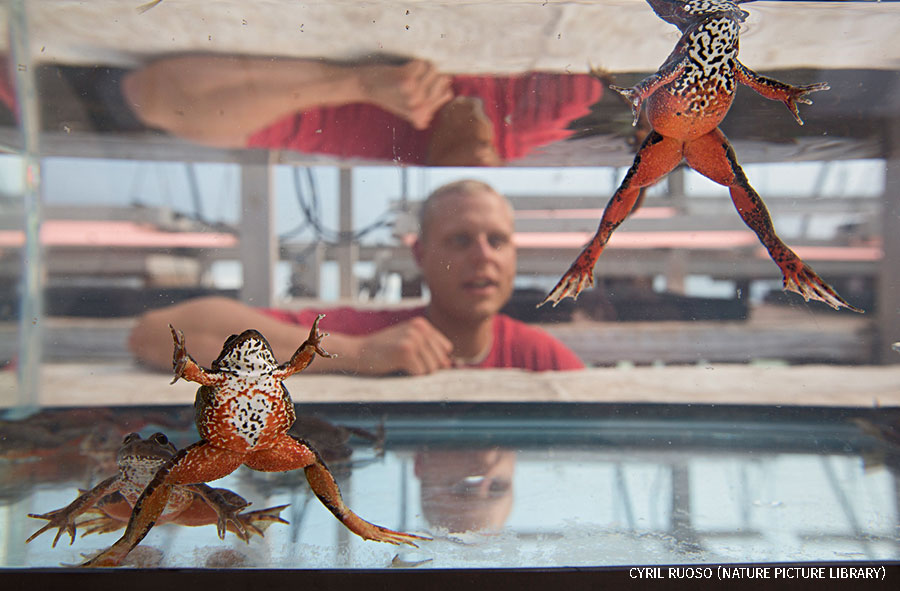 IT STARTED WITH A SMALL FROG in big trouble. Oregon spotted frogs once flourished from British Columbia to Northern California, but habitat loss and invasive predators have driven these marsh dwellers from more than 90 percent of their historic range. In 2009, incarcerated men at Washington State’s Cedar Creek Corrections Center stepped up to help.

Advised by Washington Department of Fish and Wildlife scientist Marc Hayes—and with training from corrections staff and environmental science graduate students at nearby Evergreen State College—13 prisoners worked as conservation technicians during six seasons, nurturing tadpoles to robust adulthood so the animals could join and bolster wild populations.

Hayes admits he was concerned at first, uncertain the men could master demanding wildlife-handling protocols. But he shed those reservations after seeing the program’s first-year results. “Cedar Creek did consistently better than other breeding programs,” he says, “producing higher survival rates and larger mature animals.” From 2009 to 2015, the inmates, staff and graduate students raised 879 healthy frogs and released them into wetlands along Puget Sound. “We learned a lot about rearing Oregon spotted frogs,” Hayes says. “I’m proud to have worked with so many dedicated folk.”

Cedar Creek’s frog work was part of the Sustainability in Prisons Project (SPP), a collaboration between Evergreen State College and Washington’s Department of Corrections. It was the first prison-based wildlife-recovery effort in the nation, according to SPP co-director Kelli Bush, and served as a springboard for similar programs powered by the work of hundreds of incarcerated men and women.

One major focus of their work: pollinators. In 11 of 12 state prisons, inmates and staff nurture some 60 thriving honey-bee hives along with native plants in pollinator-friendly landscaping and garden plots. And at Mission Creek Corrections Center for Women (MCCCW), inmates are working to save the highly endangered Taylor’s checkerspot butterfly. Destruction of its native grasslands had reduced the species to a handful of small, isolated groups. But since 2011, more than 18,000 MCCCW-reared caterpillars and butterflies have been released into protected habitats in Washington, helping launch new populations. Checkerspots also are more likely to find the food and shelter plants they need because nurseries at three other state prisons cultivate seeds and plugs of native plants for prairie restoration.

Program participants benefit along with wildlife. Carolina Landa, now an Evergreen State College graduate student, says rearing endangered butterflies while incarcerated at MCCCW was transformative. “Doing something good for the environment ... gave me a sense of worth,” she says, “and a base for being successful after release.”

A Homegrown Hero in Ohio »
Community Hero: Creating Connections in Paradise »
Why Communities Matter for Wildlife »