Protecting and restoring Gulf habitat will help manatees survive in a changing climate. 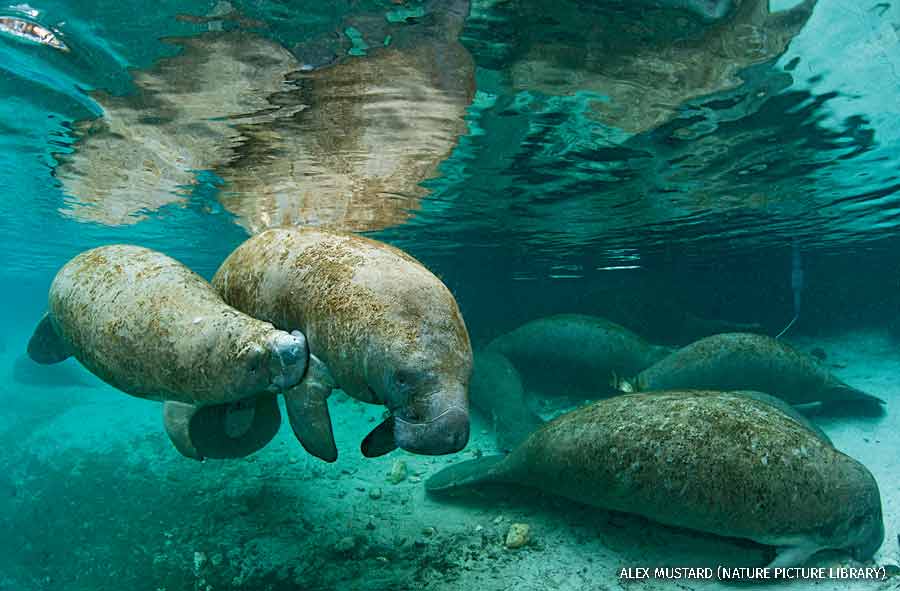 A young Florida manatee nurses its mother as others loll nearby in Florida’s Crystal River National Wildlife Refuge.

FONDLY KNOWN AS "SEA COWS," Florida manatees, a subspecies of West Indian manatees, graze on seagrass beds off the eastern and southern U.S. coasts. When offshore waters dip below 68 degrees F, these gentle giants, which are susceptible to hypothermia, migrate to warmer waters—mainly along the Gulf Coast—such as freshwater springs and areas warmed by power-plant discharges.

Spared from impacts of the BP oil spill, manatees represent a long-term conservation success—though one that needs vigilant care to maintain.

Florida first protected the animals in 1893 by prohibiting manatee hunting. But as the state developed, water quality declined, degrading seagrass habitat, and boat strikes killed increasing numbers of manatees, which the U.S. Fish and Wildlife Service (FWS) listed as endangered in 1973.

In 1983, FWS created the Crystal River National Wildlife Refuge, a series of warm, freshwater springs that has become the largest winter preserve for manatees on Florida’s Gulf Coast. Thanks to this reserve and other state and federal protections, the species was downlisted to threatened in 2017. Today, roughly 8,000 manatees navigate Florida waters.

Protecting and restoring habitat, such as reestablishing natural water flow through the Everglades, would help manatees survive environmental change. “If we make an investment to improve water quality that will allow seagrass to recover,” says Jessica Bibza of the National Wildlife Federation’s Gulf Restoration Program, “we’ll increase food and habitat for manatees for a long time to come.”