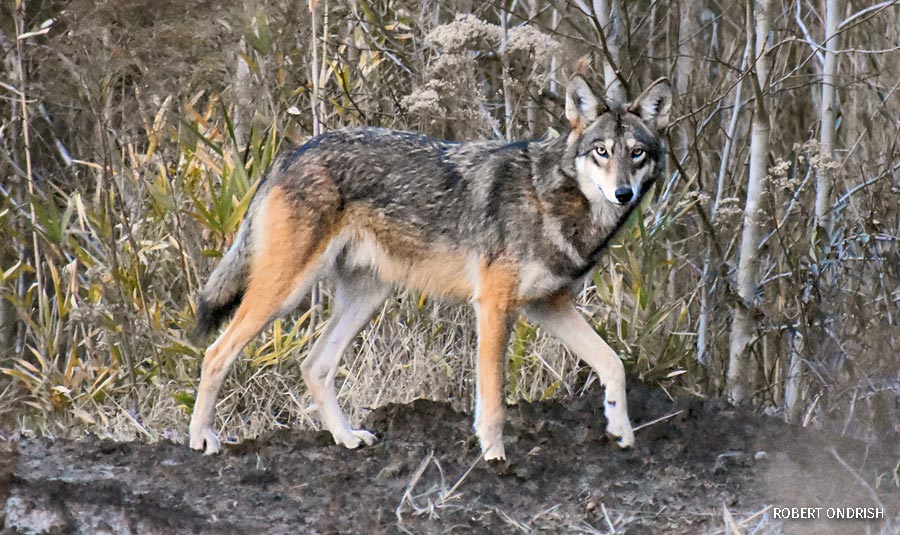 As COVID-19 slows or halts many conservation efforts around the country, the North Carolina Wildlife Federation (NCWF) is finding creative ways to continue its work and even introduce new initiatives. 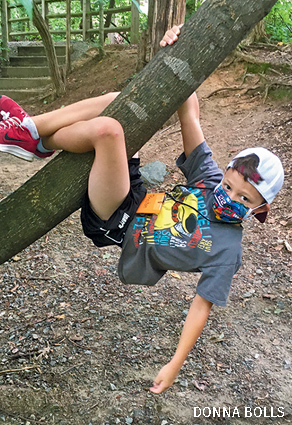 In July, for example, NCWF, in partnership with the U.S. Fish and Wildlife Service, officially unveiled a new habitat program, Prey for the Pack, designed to help the endangered red wolf (top) thrive. North Carolina is home to the world’s only wild population of red wolves, whose numbers have declined to about 20 animals. The program works directly with landowners to provide cost-share opportunities and technical assistance to those who are interested in improving habitat for wolves on their property. These improvements—which may include prescribed burns, planting native vegetation and forest management—can benefit not only wolves but many of the other animals these predators depend on for prey such as white-tailed deer, raccoons and rabbits.

In addition, NCWF’s childhood-education program, Great Outdoors University, is continuing to provide outdoor and science education during the pandemic, whether through in-person activities following strict health guidelines (pictured) or online webinars. The program, which works with partner organizations to reach kids who have less access to the outdoors through hands-on learning, is especially important now as COVID-19 has forced many children indoors for virtual-only education. “Kids can learn to love the natural world. I’ve seen it happen personally,” says Program Director Mary Bures. “It makes a huge difference in the lives of participants long term. 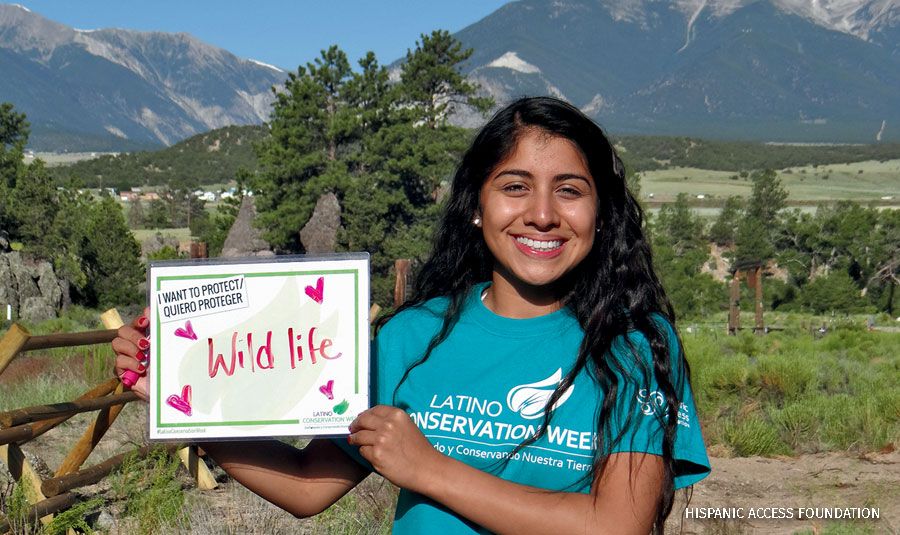 NWF partner Hispanics Enjoying Camping, Hunting, and the Outdoors (HECHO), for example, joined Latino Outdoors on a panel, called “Conexión,” exploring conservation challenges that can disproportionately affect Latinos, such as access to public lands, climate change and pollution. “We wanted to bring in a few different voices that cover the different aspects of conservation,” says HECHO Program Manager Bianca McGrath-Martinez. “As unfortunate as it is that people couldn’t gather, they were happy to engage.”

Along with social media campaigns (above, from a previous year), Zoom panels and webinars, many groups found new and innovative ways to engage people. LCW founder, the Hispanic Access Foundation (HAF), and members of the Oceans Advisory Council put together a nature activity box that they sent to participants. NWF affiliate New Mexico Wildlife Federation, the Nuestra Tierra Conservation Project and other groups facilitated an outdoor-themed version of the Mexican card game lotería on Zoom. “The essence of the week is breaking down barriers,” says HAF Conservation Program Associate Jessica Godinez. “It was eye-opening to see how important connecting to nature virtually was in breaking those barriers down. 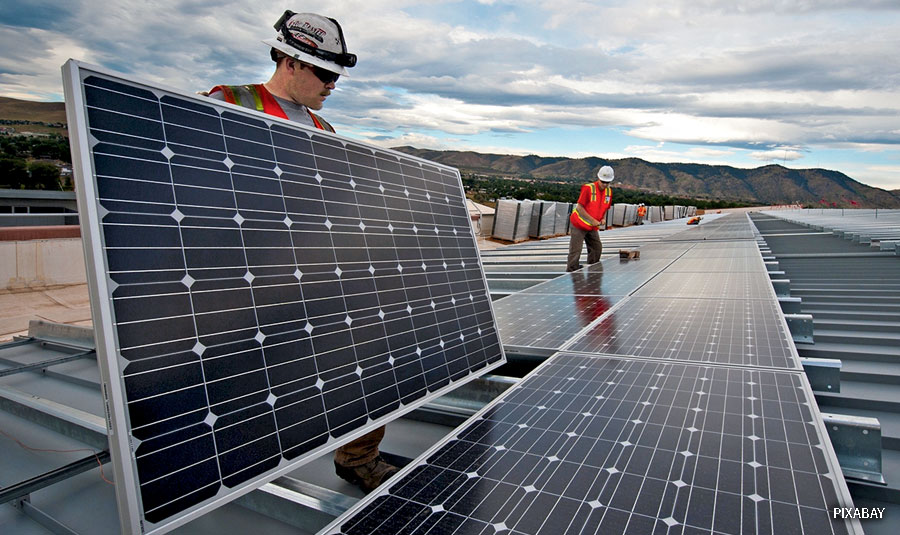 Last July, Reimagine Appalachia—a coalition of interest groups, including environmental organizations such as NWF affiliates PennFuture and the West Virginia Rivers Coalition (WVRC)—released a blueprint for creating more green jobs in Appalachia, transitioning fossil fuel workers into those jobs and investing in sustainable infrastructure such as solar energy installations (above). “As a nation and a planet, we need to address the climate crisis, and we need to move toward cleaner and cheaper renewable energy,” says WVRC Executive Director Angie Rosser. 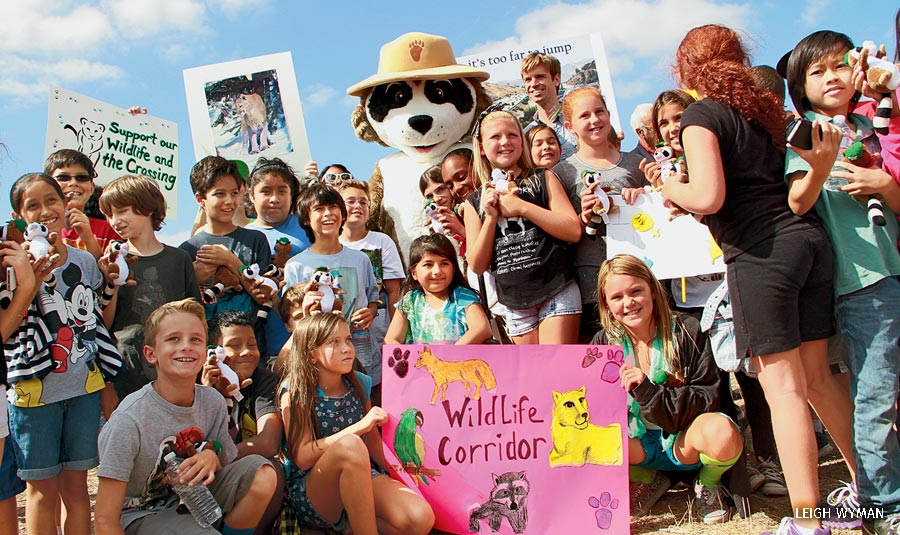 On August 31, the California Wildlife Conservation Board unanimously approved a $5 million grant to NWF that will be dedicated to building a much-needed wildlife crossing in the state’s Santa Monica Mountains. The crossing will reconnect a regional ecosystem long fragmented by the 101 Freeway.

The world’s largest wildlife crossing structure to date, this new overpass will be especially important for mountain lions. Due to isolation caused by the freeway, the Santa Monica Mountains population of cats has started to see the physical effects of inbreeding, such as kinked tails, in offspring. The crossing will allow new cats from the north to travel to the Santa Monica Mountains population, increasing genetic diversity. Scientists predict that without intervention, this population of cougars could be extinct within 50 years. Adding to the need for habitat connectivity, wildfires of increasing intensity in recent years have limited viable wildlife habitat even further and caused numerous deaths when mountain lions and other species have become trapped by barriers such as highways.

Since the project began, the wildlife crossing has received enormous public support (above), culminating in this grant, the largest single donation the campaign has received to date. “The state of California continues to show immense support for this landmark project,” says NWF California Regional Executive Director Beth Pratt. With $15 million of the $85 million needed to construct the crossing now in hand, project organizers expect to break ground in late 2021. 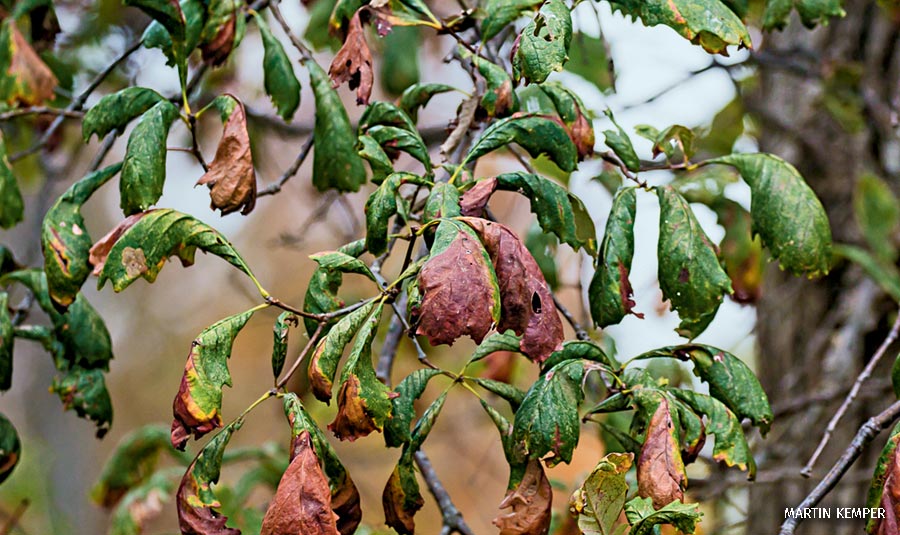 Released in August by NWF, Prairie Rivers Network and the Xerces Society for Invertebrate Conservation, the report Drifting Toward Disaster analyzes impacts of the herbicide dicamba on the environment. Dicamba is often used on farmland, but when it evaporates, the herbicide drifts to surrounding areas. After reviewing numerous studies, report authors concluded that such chemical drift could have harmful consequences on wild plants, including necrosis (above), deformities and death. “Many wildlife species rely on plants affected by dicamba, and we don’t fully understand long-term impacts yet,” says Lekha Knuffman, an NWF agriculture program specialist. As the U.S. Environmental Protection Agency considers renewing dicamba’s registration in 2021, the report recommends that renewal not proceed until scientists do more research on the herbicide’s environmental impacts.